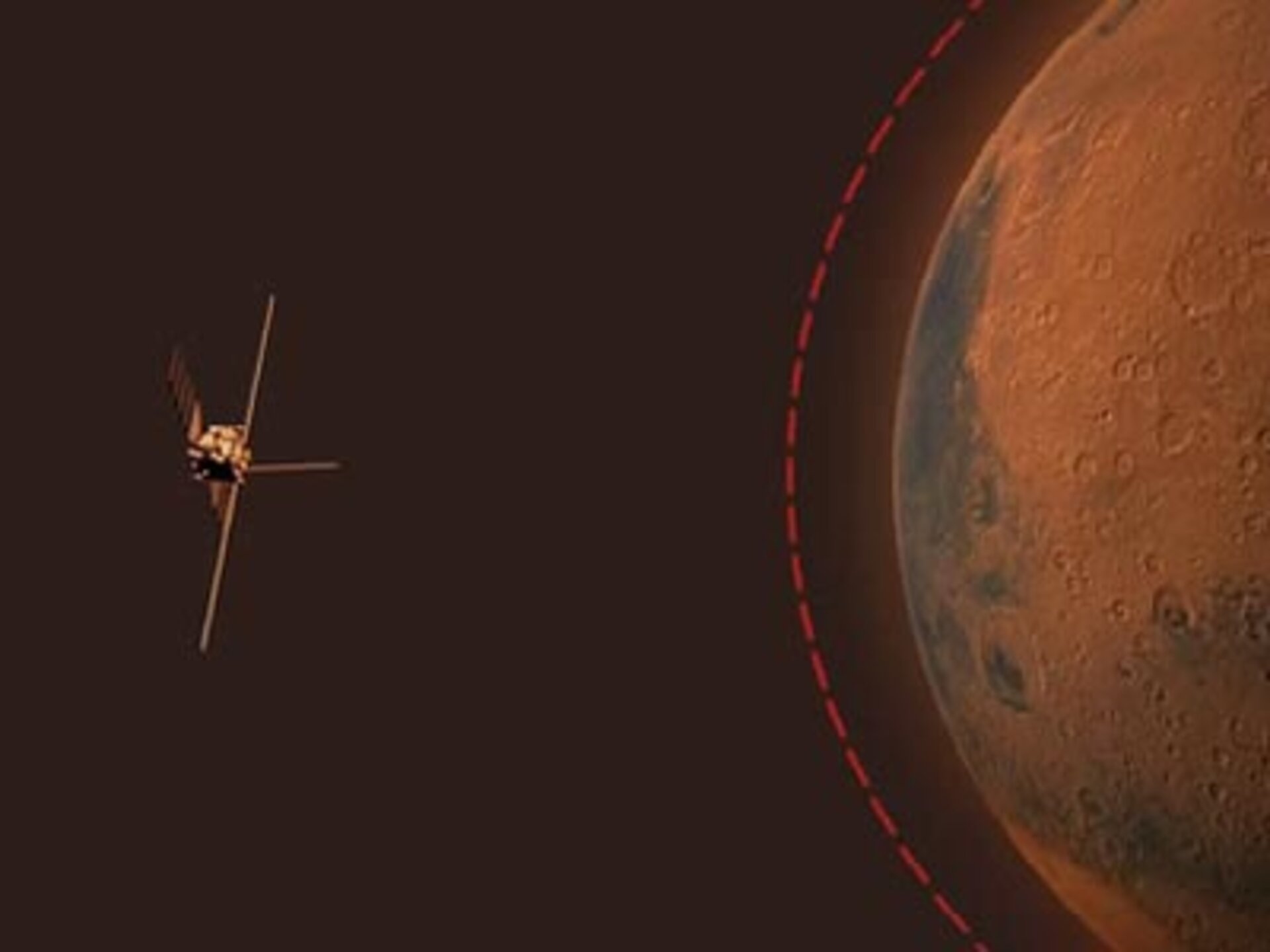 MARSIS, the radar on board ESA's Mars Express, has performed its first sounding of the Martian ionosphere – the upper part of the atmosphere – and found a number of unexpected features.

Like solid surfaces and layers of material, atmospheres of planets can be probed by radar. In their analyses of these data for Mars, scientists are exploring the connection between the ionosphere's structure and the behaviour of the magnetic fields permeating the crust of the Red Planet.

MARSIS has been collecting ionospheric data, mostly during Martian day-time observations, since this summer. Radio signals emitted by the radar are reflected in the form of echoes when they encounter a region of the ionosphere where the natural frequency of the plasma – the gas of charged particles that composes the ionosphere - matches that of the radar.

MARSIS scientists have discovered the presence of a number of unexpected hyperbola-shaped oblique echoes, facing downwards. These are different from the vertical echoes normally expected from the upper interface of the ionosphere.

By comparing the MARSIS map of these echoes with maps of the Martian crustal magnetic field from Mars Global Surveyor's data, scientists noted that the ionospheric areas from which the oblique echoes are generated correspond to areas of strong magnetic fields in the crust of the planet.

"In particular, we believe that the creation of the bulge, which locally increases the height of the ionosphere, has to do with the heating caused by the charged particles (electrons) carried by the solar wind. These penetrate the ionosphere along the vertical magnetic field peak and contribute to increasing the local density of particles," says Gurnett.

However, the crustal magnetic fields cannot account for all the oblique echoes observed, even if they are responsible for the majority of them. In future analyses, the MARSIS scientists intend to explore other mechanisms for the production of the oblique echoes. These include wind-driven atmospheric waves excited by topographic features and various types of wave-like structures in the atmosphere caused by the interaction with the solar wind.

MARSIS is sensitive to the magnetic fields in a totally different and unexpected way. The pulses of radar energy excite the thin plasma in the local vicinity of the spacecraft and the resulting signals oscillate at a frequency dependent on the magnetic field strength. In this way MARSIS is adding to the data about the crustal magnetic fields obtained by other spacecraft.

MARSIS measurements so far also allowed a good preliminary description of the way the ionosphere reacts when the solar activity, and the consequent bombardment of charged particles, increase. For instance, this is observed when some surface reflections during the ionospheric probing vary in intensity following solar flares, such as those that occurred on 7 and 15 September this year.

"Understanding how the ionosphere behaves, and how it allows the propagation of radio-waves in different ionospheric conditions, is also very important to properly plan the radar sounding of the subsurface. Processing and interpreting the subsurface signals depends on understanding the influence of the ionosphere," concludes Giovanni Picardi, MARSIS Principal Investigator.

These findings appear on line in Science, on 30 November 2005, in an article called 'Radar soundings of the ionosphere of Mars'.

Mars Express was launched on 2 June 2003 and has been orbiting Mars since December 2003. On 19 September, ESA took the decision to extend the mission by one additional Martian year (23 months), as of December 2005.