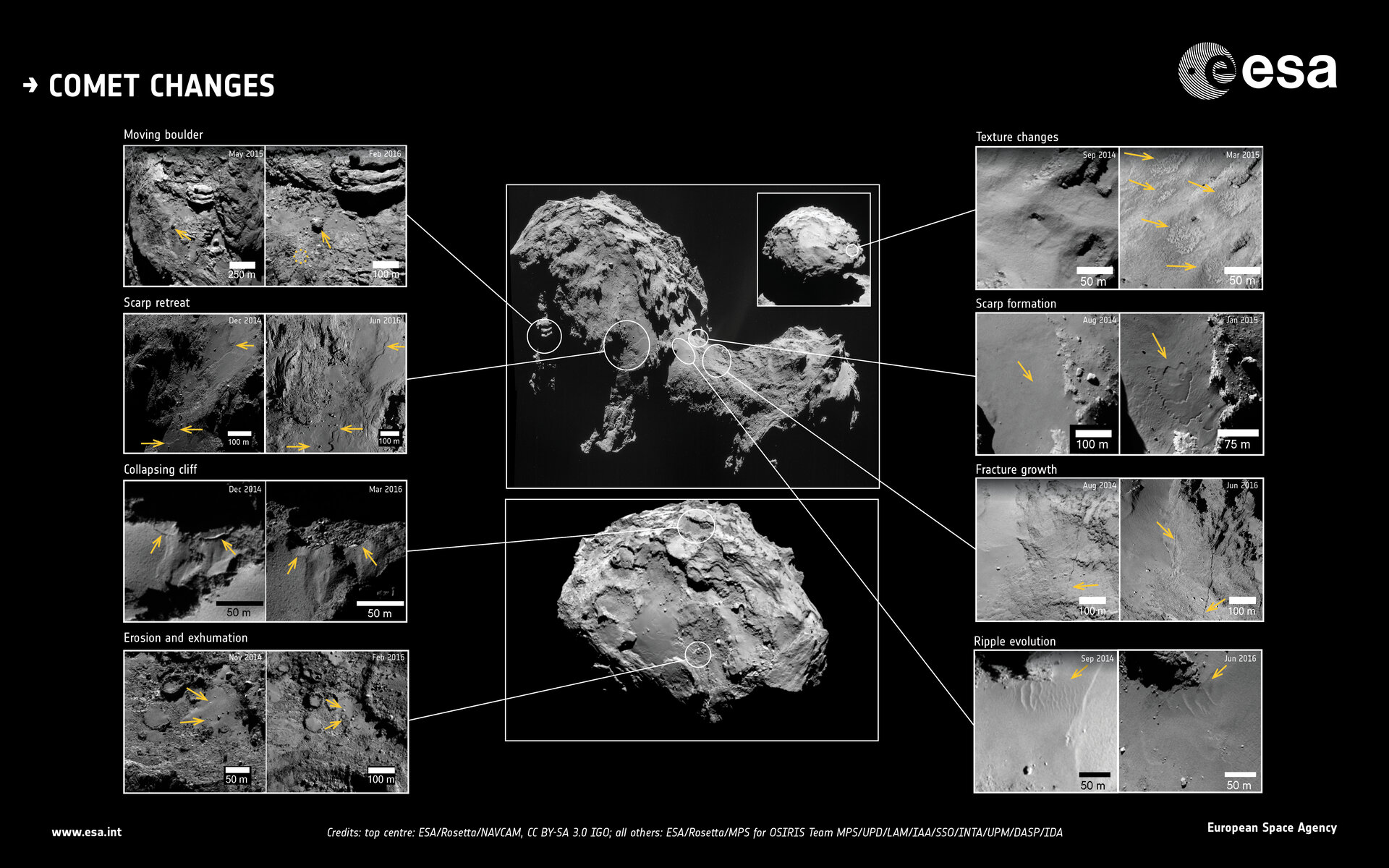 Growing fractures, collapsing cliffs, rolling boulders and moving material burying some features on the comet’s surface while exhuming others are among the remarkable changes documented during Rosetta’s mission.

A study published in Science today summarises the types of surface changes observed during Rosetta’s two years at Comet 67P/Churyumov-Gerasimenko. Notable differences are seen before and after the comet’s most active period – perihelion – as it reached its closest point to the Sun along its orbit.

“Monitoring the comet continuously as it traversed the inner Solar System gave us an unprecedented insight not only into how comets change when they travel close to the Sun, but also how fast these changes take place,” says Ramy El-Maarry, study leader

The changes, which were either unique transient phenomena or taking place over longer periods, are linked to different geological processes: in situ weathering and erosion, sublimation of water-ice, and mechanical stresses arising from the comet’s spin.

In situ weathering occurs all over the comet, where consolidated materials are weakened – such as by heating and cooling cycles on daily or seasonal timescales – causing their fragmentation. Combined with heating of subsurface ices that lead to outflows of gas, this can ultimately result in the sudden collapse of cliff walls, the evidence of which is apparent in several locations on the comet.

A completely different process is thought to be responsible for the 500 m-long fracture spotted in August 2014 that runs through the comet’s neck in the Anuket region, and which was found to have extended by about 30 m by December 2014. This is linked to the comet’s increasing spin rate in the lead up to perihelion.

Furthermore, in images taken in June 2016, a new 150–300 m-long fracture was identified parallel to the original fracture.

Close to the fractures, a 4 m-wide boulder moved by about 15 m, as determined by comparing images taken in March 2015 and June 2016. It is not clear if the fracture extension and movement of the boulder are related to each other or caused by different processes.

A substantially larger boulder, some 30 m wide and weighing 12 800 tonnes, was found to have moved an impressive 140 m in the Khonsu region, on the larger of the two comet lobes.

It is thought that the boulder moved during the perihelion period, as several outburst events were detected close to its original position. The movement could have been triggered in one of two ways: either the material on which it was sitting eroded away, allowing it to roll downslope, or a forceful outburst could have directly lifted it to the new location.

Erosion caused by the sublimation of material, and deposition of dust falling from outbursts, are also thought to be responsible for sculpting the landscape in different ways, either uncovering previously hidden surfaces or depositing material elsewhere.

For example, scarps in several smooth plains have been observed to retreat by tens of metres and at a rate of up to a few metres per day around perihelion.

“Scarp retreats were observed before on Comet Tempel 1, inferred by comparing images taken during flybys of the comet by NASA’s Deep Impact in 2005, and Stardust-NExT in 2011,” says Ramy. “What we were able to do with Rosetta was to monitor similar changes continuously, and at a higher resolution.

“Our observations additionally tell us that scarp retreat seems to be a common process on comets, specifically in smooth-looking deposits.”

Furthermore, in the smooth plains of Imhotep, previously hidden circular features, along with small boulders, have been exposed by the removal of material.

In one location, a depth of about three metres had been removed, most likely through the sublimation of underlying ices.

Changes were also noted in the comet’s smooth neck region near the distinctive ripples that were likened to Earth’s sand dunes when they were first identified. Close monitoring of the ripple formations showed this location to also display expanding circular features in the soft material that reached diameters of 100 m in less than three months. They subsequently faded away to give rise to new sets of ripples.

Scientists speculate that the repeated development of these unique features at the same spot must be linked to the curved structure of the neck region directing the flow of sublimating gas in a particular way.

Another type of change is the development of honeycomb-like features noticed in the dusty terrains of the Ma’at region on the comet’s small lobe in the northern hemisphere, marked by an increase in surface roughness in the six months leading up to perihelion.

Similar to other seasonal changes, these features faded substantially after perihelion, presumably as a result of resurfacing by the deposition of new particles ejected from the southern hemisphere during this active period.

The scientists also note that although many small-scale localised changes have occurred, there were no major shape-changing events that significantly altered the comet’s overall appearance. Ground-based observations over the last few decades suggest similar levels of activity during each perihelion, so they think that the major landforms seen during Rosetta’s mission were sculpted during a different orbital configuration.

“One possibility could be that earlier perihelion passages were much more active, perhaps when the comet had a larger inventory of more volatile materials in the past,” speculates Ramy.

“This documentation of changes over time was a key goal of Rosetta’s mission, and shows the surface of comets as geologically active, on both seasonal and short transient timescales,” says Matt Taylor, ESA’s Rosetta Project Scientist.

“Surface changes on comet 67P/Churyumov-Gerasimenko suggest a more active past,” by M.R. El-Maarry is published in Science.