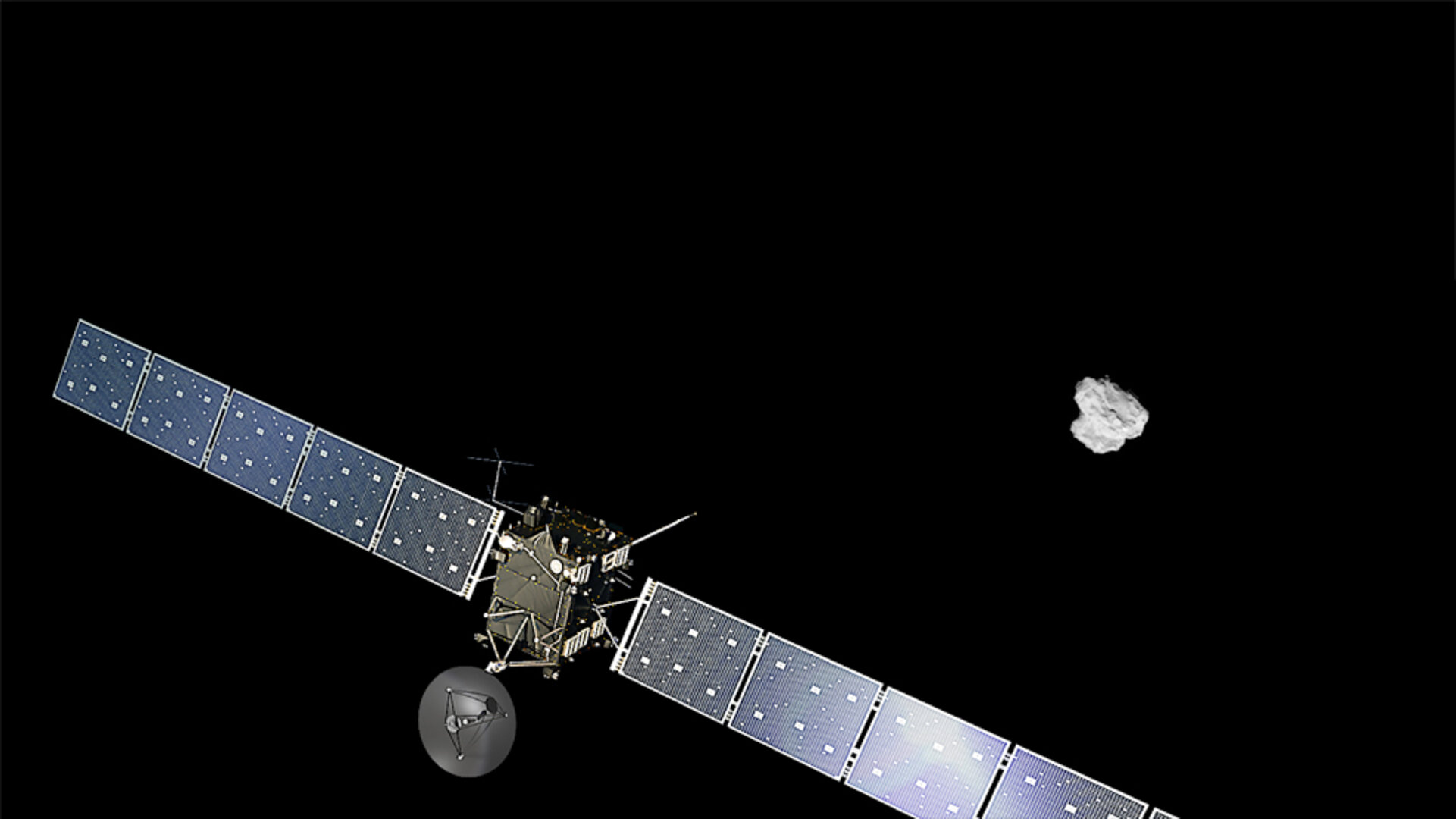 Rosetta is set to complete its mission in a controlled descent to the surface of its comet on 30 September.

Members of the media are invited to join Rosetta science and mission control experts at the ESA’s European Space Operations Centre (ESOC) in Darmstadt, Germany, on 29 and 30 September, to follow the conclusion of this historic mission.

ESA’s Rosetta spacecraft arrived at Comet 67P/Churyumov–Gerasimenko on 6 August 2014, following a ten-year journey through the Solar System after its launch on 2 March 2004. The Philae lander was sent down to the surface of the comet on 12 November 2014.

After two years living with the comet, returning an unprecedented wealth of scientific information during its closest approach to the Sun, Rosetta and the comet are now heading out beyond the orbit of Jupiter again.

Travelling further from the Sun than ever before, and faced with a significant reduction in solar power that it needs to operate, Rosetta’s destiny has been set: it will follow Philae down onto the surface of the comet.

Confirmation of the end of mission is expected from ESA’s main control room at 11:20 GMT or 13:20 CEST +/- 20 minutes (Earth time) on 30 September, with the spacecraft set on a collision course with the comet the evening before.

The final hours of descent will enable Rosetta to make many once-in-a-lifetime measurements, including analysing gas and dust closer to the surface than ever possible before, and taking very high resolution images of the comet nucleus, including the open pits of the Ma’at region where the spacecraft is expected to make its controlled impact.

These data should be returned during the descent up to the moment of final impact, after which communication with the spacecraft will not be possible.

Media are invited to cover the final hours of operations at ESOC from 10:00 CEST on 30 September, and join mission representatives in celebrating the success of this incredible adventure.

In addition, scientific journalists are invited to apply to attend an afternoon with Rosetta science experts the day before, on 29 September, dedicated to reviewing the key scientific highlights of the mission so far.

Both the science session on 29 September and the main mission finale on 30 September will be live streamed for all interested media at www.esa.int.

Programme at ESOC
(all times in CEST, programme/times subject to change)

Rosetta has provided many important clues for scientists to put together to solve key questions regarding the comet’s origin and evolution, its place in the early Solar System, and the possible role of comets in delivering ingredients considered crucial for the emergence of life on Earth, including water and organic materials.

Rosetta scientists will take us on a comprehensive scientific journey, putting those puzzle pieces together. The tour will start with an explanation of the comet’s varied landscape, its interior properties and the nature of the dust ejected from the nucleus, followed by a close look at its changing activity over the course of the mission, and the interaction of the comet with its surroundings as it orbits the Sun. We will also discover more about the organic molecules detected at the comet, and finally what the consequences all of these findings have for our understanding of the evolution of our Solar System.

The programme for media will follow the operational highlights of the descent of Rosetta, which will be relayed live via videostream from the Main Control Room to the Media Centre. Mission experts will also explain the scientific highlights of the mission so far, and present the final images as Rosetta gets closer and closer to the surface of the comet.

Members of the wide international Rosetta team, including scientists, spacecraft operators, and engineers, as well as representatives from ESA and its partner agencies, along with industry and some special guests, will witness and celebrate the final hours of this iconic mission together.

All will be available for media interviews.

Media accreditation
Media with valid press and/or social media credentials should register at https://myconvento.com/public/event_register/index/1438240 for the main finale on 30 September. Journalists with specific scientific interest should also register to attend the 29 September scientific session, although numbers may be limited.

Follow online
The briefings on 29 and 30 September will be livestreamed at: esa.int

Live coverage of operational milestones in the final days of the mission will also be provided via the Rosetta blog and via @ESA_Rosetta and @esaoperations on Twitter. Please use the #CometLanding hashtag on social media.

Hangout on air event – 19 September
In preparation for the mission end, we will host a hangout on air at 14:00 CEST on 19 September  to present and discuss Rosetta’s final days and hours of operation. The sequence of the descent, as well of the images and scientific data to be acquired will be presented, as well as a summary of the results of the search that led to the announcement of the discovery of Philae on Comet 67P/Churyumov–Gerasimenko on 5 September.

For broadcasters
Information on available footage, broadcast times and satellite parameters will be available at: http://www.esa.int/esatv/Television