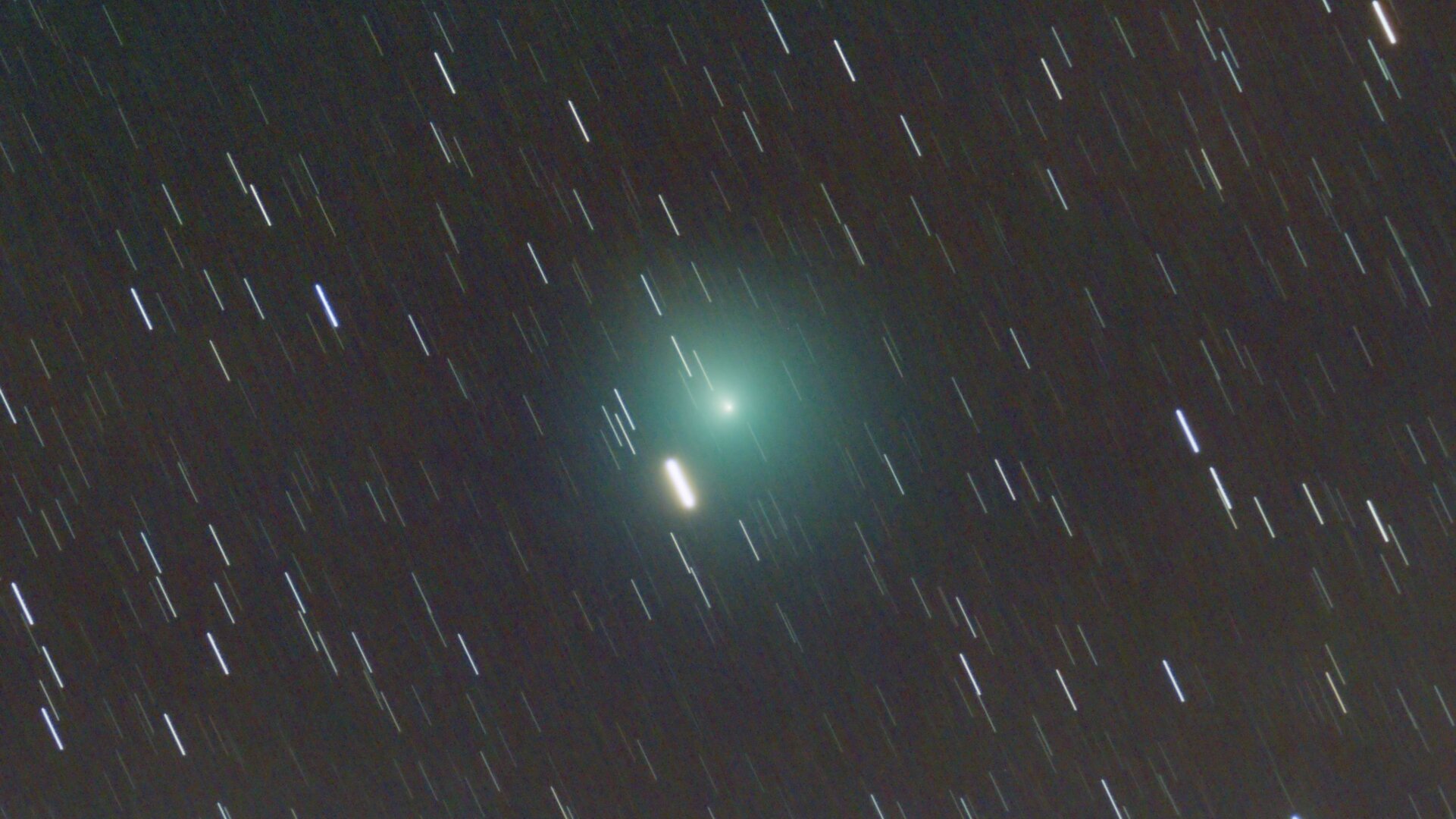 A special visitor is crossing the sky: Comet 46P/Wirtanen, sighted with telescopes and binoculars in recent weeks, is on the way to its closest approach to Earth this weekend, when it might become visible to the naked eye.

A bright comet with a period of 5.5 years, 46P had been chosen in the 1990s as the target of ESA’s Rosetta mission.

“When we began to study Rosetta, one of the most important tasks was to create a list of comets that could be reached by a spacecraft launched on an Ariane 5 and carrying sufficient payload to study the comet,” says Gerhard Schwehm, who was the ESA Rosetta project scientist at the time.

“It turned out that a mission to Comet 46P/Wirtanen with launch in early 2003 would be one of the best opportunities. This initiated an intensive observation campaign from the ground to prepare for the mission.”

However, a launch delay from 2003 to 2004 meant the spacecraft would not be able to rendezvous with that comet at its closest approach to the Sun in 2013, prompting the Rosetta team to select a new target, the now famed 67P/Churyumov­–Gerasimenko.

“The rest, as they say, is history, but because of the original choice, Comet 46P remains one of the best-observed comets to date,” adds Gerhard.

Comets from ground and space

While we’ve learnt the ins and outs of Comet 67P thanks to the comprehensive data collected there by Rosetta between 2014 and 2016, the mission’s original target has still many secrets in store. Astronomers are now taking advantage of its visit to observe it from the ground and uncover some of its mysteries.

Comet 46P reached perihelion, the closest point to the Sun along its orbit, on Wednesday 12 December, and will appear at its brightest to observers on Earth in coming days, as it keeps moving towards our planet, reaching the closest distance on Sunday.

“The main advantage of observing comets with telescopes on the ground is that we can study them as a whole, including the coma and tails that stretch over millions of kilometres,” explains Colin Snodgrass of University of Edinburgh, UK.

Colin coordinated the ground-based campaign to observe 67P while Rosetta was investigating the comet from orbit, and is now involved in observing 46P as well.

In the case of 67P, observations from the ground provided a global context to the detailed measurements that Rosetta made in the inner coma, revealing the way that the gas observed in the coma was linked to the comet’s season cycle.

“From their vantage point, spacecraft like Rosetta can see details that we cannot resolve from the ground,” says Colin. “However, for Comet 46P we now have a very special opportunity to get detailed observations from Earth, because the comet is coming really close to us: at its closest approach, it will be just 30 times farther than the Moon.”

“We still won’t get anything like the detail that Rosetta returned – we won’t be able to resolve the nucleus of 46P, for example – but we can study the outflow of gas and dust in the inner coma better than is possible for most comets.”

Because Comet 46P is passing so close to us, it is very bright – millions of times brighter than 67P appeared from Earth in 2015 – allowing astronomers to observe it with a wide range of telescopes and at different wavelengths. With these data, they will piece together a more complete picture of the comet and what drives its activity.

From one comet to the next

Observing Rosetta’s original target is also providing astronomers with a chance to test techniques and develop expertise that will be of use when 67P – Rosetta’s actual target – will have its next perihelion in late 2021.

Helen Usher, a PhD student at the Open University and Cardiff University, working with the Faulkes Telescope Project in the UK, is coordinating an effort to involve students from schools across Europe, collecting and analysing data for Comet 46P and in preparation of future observations of 67P.

“I was inspired by the Rosetta mission to start my PhD, and I’m pleased to share this enthusiasm with school children, who are thrilled to be contributing to our scientific research,” says Helen.

Eight schools from the UK, Germany, France and Norway have joined the project so far, including a primary school, and Helen hopes more will join in coming weeks.

The Faulkes Telescope Project makes use of a worldwide network of robotic telescopes, built and operated by Las Cumbres Observatory, including two 2-m telescopes in Hawaii and Australia.

In particular, the Faulkes Telescope North in Hawaii is equipped with a series of filters that were provided by ESA to study Comet 67P from the ground during the Rosetta mission, and are now being used to observe 46P.

“These filters are great to observe a bright comet like 46P, enabling us to separate the gas and dust content of the coma,” adds Helen.

As the weekend approaches, astronomers across the world – professional, student and amateur alike – look forward to clear skies for their observations.

How to observe the comet

Comets are notoriously unpredictable, but 46P is expected to reach magnitude 3 on Sunday, so it might become visible to the naked eye for sky gazers in dark locations. During the weekend, the comet can be found near the Pleiades, a star cluster not far in the sky from the iconic Orion constellation.

Enthusiasts of astronomical photography may try to capture the comet with a camera and telephoto lens or a portable telescope, but because of its rapid motion across the sky, a series of short, roughly 10 second exposures is recommended rather than a longer one.

Rosetta mission experts will also look at the sky this weekend to contemplate the comet that was almost theirs to explore.

“We had to say good-bye to 46P for Rosetta, but the comet was for so many years at the core of my professional life so it is very emotional that I might have a chance to see it directly with my own eyes,” concludes Gerhard.

Rosetta is an ESA mission to rendezvous with a comet, study it up close and deploy a lander on its surface. It completed its mission at Comet 67P/Churyumov­–Gerasimenko on 30 September 2016.

The Faulkes Telescope Project invites primary and secondary schools across Europe to join the Comet 46P/Wirtanen campaign in December 2018 and January 2019. The students can make observations and help analyse the data to learn more about the comet’s position, brightness, size, shape, activity and rotation. The Faulkes Telescope Project is an education partner of Las Cumbres Observatory (LCO), a non-profit organisation with headquarters in Goleta, California, USA, dedicated to building and operating a worldwide network of robotic telescopes for science and education.