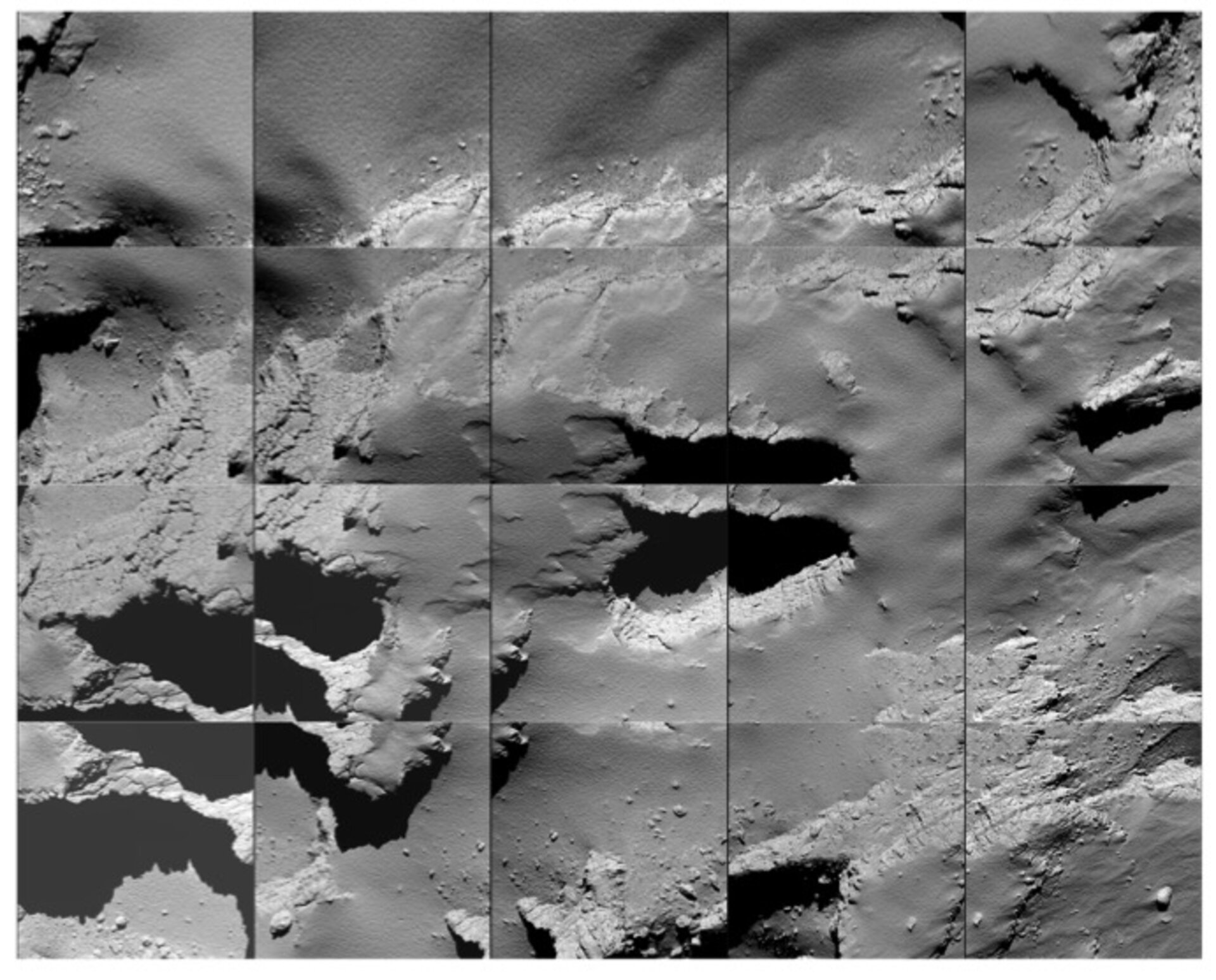 ESA’s historic Rosetta mission has concluded as planned, with the controlled impact onto the comet it had been investigating for more than two years.

Confirmation of the end of the mission arrived at ESA’s control centre in Darmstadt, Germany at 11:19 GMT (13:19 CEST) with the loss of Rosetta’s signal upon impact.

Rosetta carried out its final manoeuvre last night at 20:50 GMT (22:50 CEST), setting it on a collision course with the comet from an altitude of about 19 km. Rosetta had targeted a region on the small lobe of Comet 67P/Churyumov–Gerasimenko, close to a region of active pits in the Ma’at region.

The descent gave Rosetta the opportunity to study the comet’s gas, dust and plasma environment very close to its surface, as well as take very high-resolution images.

Pits are of particular interest because they play an important role in the comet’s activity. They also provide a unique window into its internal building blocks.

The information collected on the descent to this fascinating region was returned to Earth before the impact. It is now no longer possible to communicate with the spacecraft.

“Rosetta has entered the history books once again,” says Johann-Dietrich Wörner, ESA’s Director General. “Today we celebrate the success of a game-changing mission, one that has surpassed all our dreams and expectations, and one that continues ESA’s legacy of ‘firsts’ at comets.”

“Thanks to a huge international, decades-long endeavour, we have achieved our mission to take a world-class science laboratory to a comet to study its evolution over time, something that no other comet-chasing mission has attempted,” notes Alvaro Giménez, ESA’s Director of Science.

“Rosetta was on the drawing board even before ESA’s first deep-space mission, Giotto, had taken the first image of a comet nucleus as it flew past Halley in 1986.

“The mission has spanned entire careers, and the data returned will keep generations of scientist busy for decades to come.”

“As well as being a scientific and technical triumph, the amazing journey of Rosetta and its lander Philae also captured the world’s imagination, engaging new audiences far beyond the science community. It has been exciting to have everyone along for the ride,” adds Mark McCaughrean, ESA’s senior science advisor.

Since launch in 2004, Rosetta is now in its sixth orbit around the Sun. Its nearly 8 billion-kilometre journey included three Earth flybys and one at Mars, and two asteroid encounters.

The craft endured 31 months in deep-space hibernation on the most distant leg of its journey, before waking up in January 2014 and finally arriving at the comet in August 2014.

After becoming the first spacecraft to orbit a comet, and the first to deploy a lander, Philae, in November 2014, Rosetta continued to monitor the comet’s evolution during their closest approach to the Sun and beyond.

“We’ve operated in the harsh environment of the comet for 786 days, made a number of dramatic flybys close to its surface, survived several unexpected outbursts from the comet, and recovered from two spacecraft ‘safe modes’,” says operations manager Sylvain Lodiot.

“The operations in this final phase have challenged us more than ever before, but it’s a fitting end to Rosetta’s incredible adventure to follow its lander down to the comet.”

The decision to end the mission on the surface is a result of Rosetta and the comet heading out beyond the orbit of Jupiter again. Further from the Sun than Rosetta has ever journeyed before, there would be little power to operate the craft. 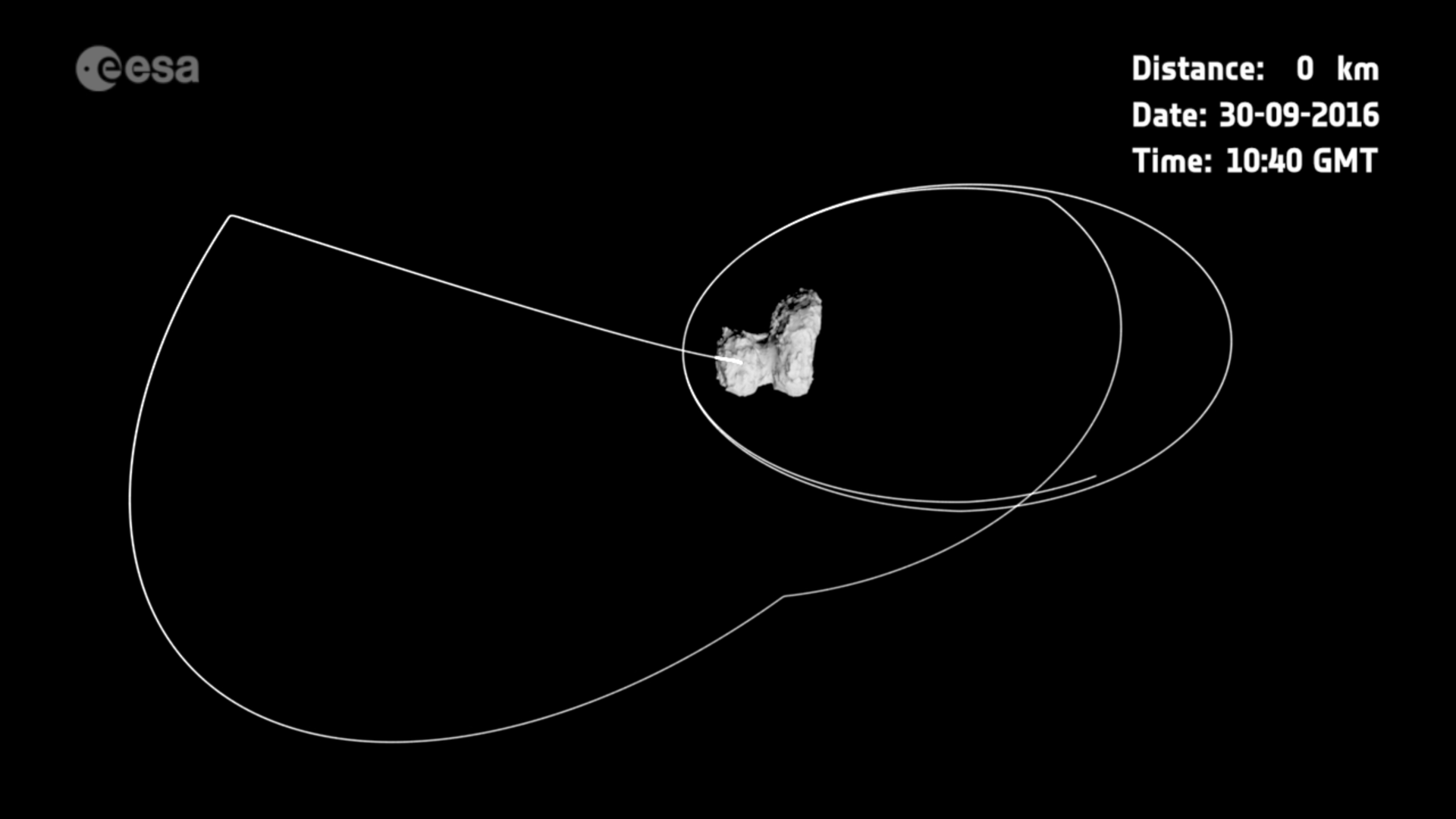 Mission operators were also faced with an imminent month-long period when the Sun is close to the line-of-sight between Earth and Rosetta, meaning communications with the craft would have become increasingly more difficult.

“With the decision to take Rosetta down to the comet’s surface, we boosted the scientific return of the mission through this last, once-in-a-lifetime operation,” says mission manager Patrick Martin.

Many surprising discoveries have already been made during the mission, not least the curious shape of the comet that became apparent during Rosetta’s approach in July and August 2014. Scientists now believe that the comet’s two lobes formed independently, joining in a low-speed collision in the early days of the Solar System.

Long-term monitoring has also shown just how important the comet’s shape is in influencing its seasons, in moving dust across its surface, and in explaining the variations measured in the density and composition of the coma, the comet’s ‘atmosphere’.

Some of the most unexpected and important results are linked to the gases streaming from the comet’s nucleus, including the discovery of molecular oxygen and nitrogen, and water with a different ‘flavour’ to that in Earth’s oceans.

Together, these results point to the comet being born in a very cold region of the protoplanetary nebula when the Solar System was still forming more than 4.5 billion years ago.

While it seems that the impact of comets like Rosetta’s may not have delivered as much of Earth’s water as previously thought, another much anticipated question was whether they could have brought ingredients regarded as crucial for the origin of life.

Rosetta did not disappoint, detecting the amino acid glycine, which is commonly found in proteins, and phosphorus, a key component of DNA and cell membranes. Numerous organic compounds were also detected ¬by Rosetta from orbit, and also by Philae in situ on the surface.

“It’s a bittersweet ending, but in the end the mechanics of the Solar System were simply against us: Rosetta’s destiny was set a long time ago. But its superb achievements will now remain for posterity and be used by the next generation of young scientists and engineers around the world.”

While the operational side of the mission has finished today, the science analysis will continue for many years to come.

Overall, the results delivered by Rosetta so far paint comets as ancient leftovers of early Solar System formation, rather than fragments of collisions between larger bodies later on, giving an unparalleled insight into what the building blocks of the planets may have looked like 4.6 billion years ago.

“Just as the Rosetta Stone after which this mission was named was pivotal in understanding ancient language and history, the vast treasure trove of Rosetta spacecraft data is changing our view on how comets and the Solar System formed,” says project scientist Matt Taylor.

“Inevitably, we now have new mysteries to solve. The comet hasn’t given up all of its secrets yet, and there are sure to be many surprises hidden in this incredible archive. So don’t go anywhere yet – we’re only just beginning.”

Rosetta was an ESA mission with contributions from its Member States and NASA. Rosetta’s Philae lander was provided by a consortium led by DLR, MPS, CNES and ASI. Rosetta was the first mission in history to rendezvous with a comet and escort it as they orbited the Sun together. It was also the first to deploy a lander to a comet’s surface, and later end its mission in a controlled impact on the comet.

Comets are time capsules containing primitive material left over from the epoch when the Sun and its planets formed. By studying the gas, dust and structure of the nucleus and organic materials associated with the comet, via both remote and in situ observations, the Rosetta mission is a key to unlocking the history and evolution of our Solar System.