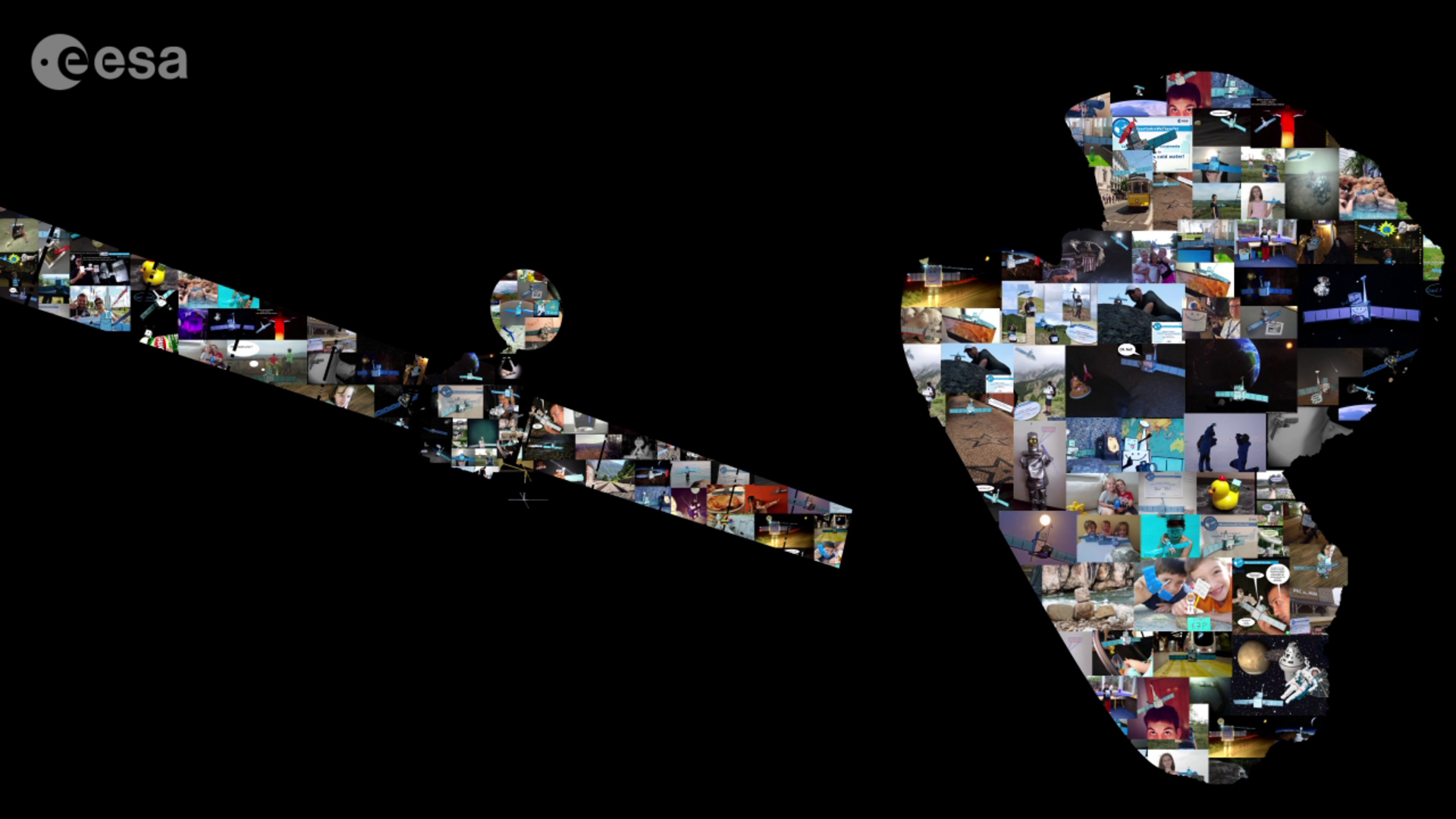 As Rosetta made its final approach to Comet 67P/Churyumov-Gerasimenko, we asked you to join this extraordinary adventure by sharing pictures of your journeys, participating in a fun photo contest that attracted hundreds of entries and nearly 23 000 votes.

No matter whether you were heading to work or visiting friends, travelling to an exotic holiday destination or going on a hike, the idea was for you to relate the last leg of your journey with that of Rosetta's by capturing an “Are we there yet?” moment. You most certainly achieved this!

Many of you interpreted our invitation literally and let us share in your trips – past, present and future – across Europe as well as other continents.

We suggested you include a model of Rosetta and the lander Philae in your photos, and provided a paper model to download, print, cut out and build. We were delighted to see how many of you took our space probe along on your journeys, and made it come to life and experience amazing adventures with you, your friends and families!

Another idea was to print a banner to tell the world your destination, or to draw inspiration from one of the mission's themes, such as the harsh environment of space or the comet's nucleus or the search for water and the building blocks of life.

We were impressed with the sheer variety of places that you visited, from frozen mountain peaks to deserted landscapes, from volcanoes and lakes to railway tracks and sandy beaches. We really appreciate the inventive effort that you put into your photos, finding water and life in the most curious locations on our planet. We were also delighted to see models of Rosetta and Philae populate your backyards, bedrooms and living rooms, or keeping you company during a long car ride.

And you were even more creative than that, by building your own models of Rosetta, Philae and the comet. These reproductions spanned a huge range of sizes, materials and artistic styles, including edible models, space masquerades and comic book strip-style collages.

Our doors were open to entries until the morning of 6 August, a couple of hours before Rosetta rendezvoused with the comet.

We received entries from all over the world, including all ESA Member States and many other countries, such as India, Australia, Turkey, the United States, Bulgaria, Hungary, Mexico, Brazil, Japan, Israel, Colombia, Pakistan, Malta, Canada, Saudi Arabia, Peru and New Zealand. We also received evidence from our friends at the Concordia Station that a paper model of Rosetta and Philae had been spotted in Antarctica!

After the deadline has closed, visitors to the competition page could vote for their favourite images, which ranked the top 20 submissions. The ESA judges – which included Rosetta mission scientists and operators and the Rosetta outreach team – then picked two top prize winners: one out of the top 20 voted entries and another one out of all entries.

The two overall winning entries attracted the attention of the judges because the images captured particular key aspects of the Rosetta mission.

From the publicly voted images our judges chose the ‘Rosetta mission in a bottle’ submitted by Elisabetta Bonora, featuring one of our paper Rosetta and Philae models safely encased in a bottle and photographed underwater. The image captured the feeling of a technical challenge, the mission theme of studying the origin of Earth’s oceans, and a long journey into the unknown – the bottle was thrown into the sea after the image was taken.

From the other entries our judges picked Emanuele Andreola’s photo taken on top of Gran Paradiso in the Graian Alps, holding one of our Rosetta mission banners. The mountain is about 4 km high, just like Comet 67P/Churyumov-Gerasimenko.

Our judges drew many parallels between mountaineering and the Rosetta mission, in terms of the preparation and training required and the long time travelling to get to the destination. They also noted that like mountaineering, they too have to always be ready to face the unknown and be aware of the risks.

We are delighted to invite our two top prize winners to our European Space Operations Centre in Darmstadt, Germany, to join us for the VIP event celebrating the first-ever landing on a comet, in November.

A further ten out of the top 20 entries were also chosen by the judges to receive a gift bag containing a selection of ESA-branded souvenirs.

Congratulations to the following entrants:

Nunzia Cerrato, for her human-sized Rosetta model in the sea
Marek Chudio for his human-sized ‘light painting’ Rosetta model
Daniel Schmidt for his LEGO comet scene
Mathilde Faure, for her Rosetta and Philae model investigating a fossil in the Alps
Orlando Adinolfi for his sand art model of Rosetta at the comet
Christina Feliciano’s ‘Comet Surfing BBQ’ group
Mani Manickam’s groups’ best wishes to Rosetta from India
Javier Etxebarria’s hiking through the Basque Country
Krzystof Bernatowicz’s little green creatures on the comet
Jakub Slama’s ‘Rosetta and Philae finally arrive at their destination’ model

In addition, we decided to give gift bags to 10 additional participants chosen from all the remaining entries. These 'lucky dip' winners will be drawn live from all remaining entries during our next Rosetta Google+ Hangout on Tuesday 2 September (watch the replay here).

We thank you for all the hard work and enthusiasm that we saw in all of your photos, and so to us, everyone is a winner! To celebrate the competition, we put together a short video comprising many of your submissions.

Meanwhile, the Rosetta spacecraft has been getting to know the comet and its environment – it is currently about 50 km from Comet 67P/Churyumov-Gerasimenko. On 25 August, five candidate sites were selected as possible places to deploy the Philae lander. The race is now on to choose a primary landing site on 15 September, with the landing itself planned for mid-November – the first time a landing on a comet has ever been attempted.

We look forward to sharing the next stage of our adventure with you. For regular mission updates, please follow our Rosetta blog. You can also connect with us on the Rosetta Mission Facebook page and the @ESA_Rosetta twitter account.