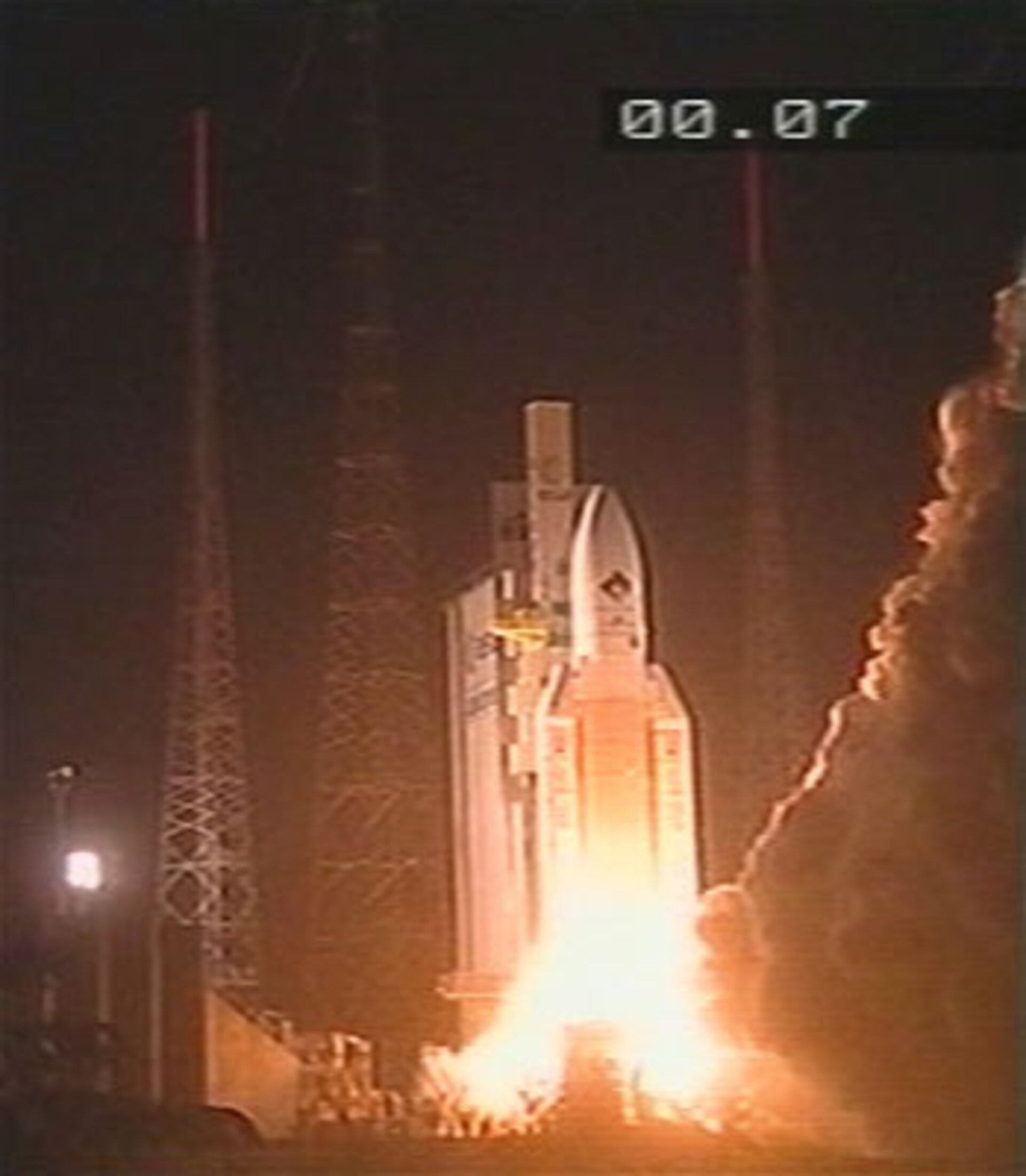 ESA PR 14-2004. Europe’s Rosetta cometary probe has been successfully launched into an orbit around the Sun, which will allow it to reach the comet 67P/Churyumov-Gerasimenko in 2014 after three flybys of the Earth and one of Mars. During this 10-year journey, the probe will pass close to at least one asteroid.

Rosetta is the first probe ever designed to enter orbit around a comet’s nucleus and release a lander onto its surface. For over a year it will conduct a thorough study of this remnant of the primitive nebula which gave birth to our Solar System about 5 billion years ago.

Rosetta’s mission began at 08:17 CET (07:17 UT) on 2 March when a European Ariane 5 launch vehicle lifted off from the Guiana Space Centre, Europe’s spaceport in Kourou, French Guiana. The launcher successfully placed its upper stage and payload into an eccentric coast orbit (200 x 4000 km). About two hours later, at 10:14 CET (09:14 UT), the upper stage ignited its own engine to reach an escape velocity in order to leave the Earth’s gravity field and enter heliocentric orbit. The Rosetta probe was released 18 minutes later.

“After the recent success of Mars Express, Europe is now heading to deep space with another fantastic mission. We will have to be patient, as the rendezvous with the comet will not take place until ten years from now, but I think it’s worth the wait” said ESA’s Director General Jean-Jacques Dordain witnessing the launch from Kourou.

ESA’s Operations Centre (ESOC) in Darmstadt, Germany, has established contact with the probe as it flies away from Earth at a relative speed of about 3.4 km/s. ESOC will be in charge of Rosetta operations and orbit determination throughout the mission. During the next eight months, the spacecraft’s onboard systems will be checked and its science payload will be commissioned. Then, it will be placed into hibernation mode for most of the ten years of its journey through the Solar System.

Rosetta will be reactivated for planetary flybys, which will be used to modify its trajectory through gravity assist manoeuvres, or asteroid flybys, observation of asteroids being one of the mission’s secondary objectives.

The first planetary encounter will be in March 2005, as Rosetta flies by the Earth for the first time. The gravity assist will boost Rosetta into an orbit that will take it to Mars two years later.

During its close encounter with Mars in February 2007, Rosetta will approach to a distance of about 200 km and conduct science observations. This Martian flyby will be followed by another Earth flyby in November the same year. Both planetary encounters will increase the probe’s orbital energy and boost it well into the asteroid belt.

A third and last flyby of the Earth in November 2009 will send Rosetta toward the orbit of comet Churyumov-Gerasimenko.

Then, by mid-2011, when it is about 800 million km from the Sun, Rosetta will ignite its main engine for a major deep-space manoeuvre that will place it onto an interception trajectory with the comet, which will take nearly three years to be reached.

Rosetta will be reactivated for good in January 2014, as it enters a six-month approach phase, closing in slowly on the nucleus of comet Churyumov-Gerasimenko. The comet will then still be far from the Sun and its nucleus should be dormant.

Rendezvous with a comet

Like comet 46P/Wirtanen, which was the planned target for Rosetta until its launch was postponed in early 2003, comet 67P/Churyumov-Gerasimenko is one of the periodic comets that were “trapped” in the inner Solar System after they came too close to Jupiter. This comet was discovered in September 1969 at the Almaty Astrophysical Institute in Kazakhstan. It was detected by astronomer Klim Churyumov, from the University of Kiev, Ukraine, on pictures taken by his colleague Svetlana Gerasimenko, from the Institute of Astrophysics of Dushanbe, Tajikistan.

Study of its orbit shows that it was captured quite recently, after too close encounters with Jupiter in 1840 and 1959. The comet is now revolving around the Sun every 6.6 years on an elliptical orbit with a low inclination compared to that of the Earth. Its perihelion (the closest point of its orbit to the Sun) is located between the orbits of the Earth and Mars, while its aphelion (the farthest point) is beyond Jupiter. In preparation for Rosetta’s mission, the comet’s nucleus was observed by the Hubble Space Telescope, which revealed an irregular body about 4 km in diameter. Being a relatively “fresh” comet in the inner Solar System, 67P/Churyumov-Gerasimenko is a promising target for the study of primitive Solar System material.

Rosetta will enter an orbit about 25 km above the nucleus in August 2014. It will then conduct detailed mapping of its surface and a landing site will be selected for Philae, its 100 kg lander. Philae will be dropped from an altitude of about 1000 meters and, due to the tiny gravity of the nucleus, it will touch down at walking speed. The lander will even have to anchor itself to the surface with a harpoon to avoid bouncing back. Philae will operate from the surface for at least a week, sending back very high resolution pictures and as information about the upper crust of the nucleus. These data will be relayed to Earth by the orbiter.

Rosetta will continue its observations of the comet’s nucleus for over a year, at least until December 2015, and will have a ringside seat to monitor the « awakening » of the comet’s activity as it comes closer to the Sun and reached its perihelion, in October 2015.

The Rosetta probe was built for ESA by an industrial team of over 50 European companies led by EADS Astrium. It is a 3 tonne spacecraft with solar arrays spanning an impressive 32 metres. This is the first probe designed to travel beyond the orbit of Mars to rely on solar cells for its power supply. In addition to the Philae lander, Rosetta incorporates a 165 kg science payload consisting of 11 instruments developed in partnership by ESA member countries, the United States, Greece, Hungary and Taiwan.

The Philae lander, developed under the leadership of Germany’s DLR aerospace research agency, carries 9 instruments provided by ESA member countries in partnership with the United States, Hungary, Poland and Russia. Among these, the ÇIVA/ROLIS set of cameras will provide panoramic and stereoscopic high-resolution views. The APXS, COSAC and Ptolemy instruments will analyse soil compounds. The SESAME seismometer will probe the surface to a depth of 2 m, while its characteristics will be studied by the MUPUS instrument with sensors on the anchoring harpoon. The ROMAP magnetometer and a second model of the CONSERT experiment will study the magnetic field and its interactions with the solar wind.

The Rosetta Stone -unearthed in Egypt more than 200 years ago– gave XIXth-century Egyptologists the keys to decipher hieroglyphic writing and to rediscover three millennia of forgotten Egyptian history and culture and in-depth study of a comet’s nucleus and asteroids by the Rosetta probe is expected to enable today’s science community to decipher the mystery of the origins of our Solar System and to better understand the mechanisms ruling the formation of planetary systems around other stars.