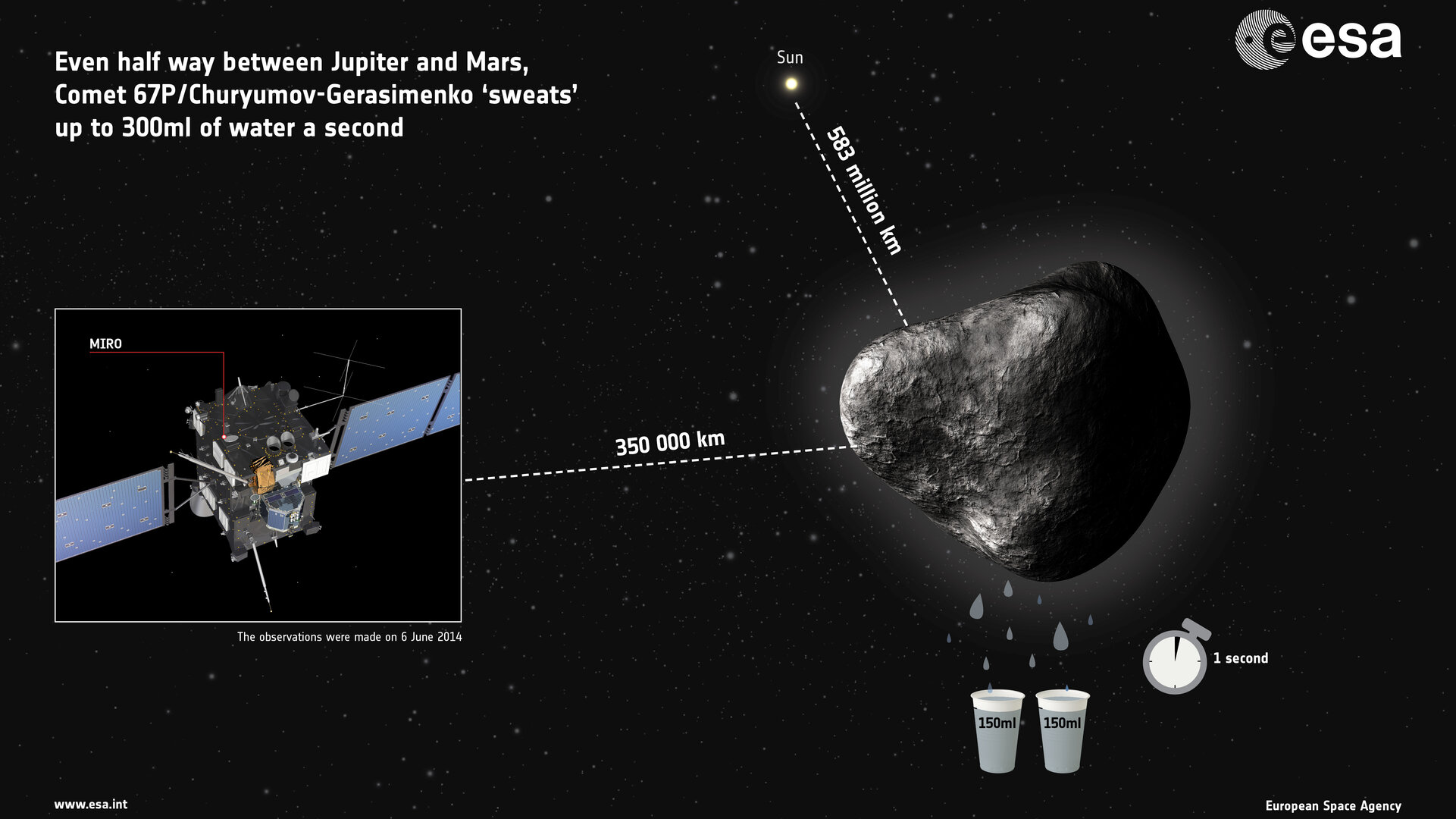 ESA’s Rosetta spacecraft has found that comet 67P/Churyumov–Gerasimenko is releasing the equivalent of two small glasses of water into space every second, even at a cold 583 million kilometres from the Sun.

The first observations of water vapour streaming from the comet were made by the Microwave Instrument for Rosetta Orbiter, or MIRO, on 6 June, when the spacecraft was about 350 000 kilometres from the comet.

Since the initial detection, water vapour has been found every time MIRO has been pointed towards the comet.

“We always knew we would see water vapour outgassing from the comet, but we were surprised at how early we detected it,” says Sam Gulkis, the instrument’s principal investigator at NASA’s Jet Propulsion Laboratory in Pasadena, California, USA.

“At this rate, the comet would fill an Olympic-size swimming pool in about 100 days. But, as it gets closer to the Sun, the gas production rate will increase significantly. With Rosetta, we have an amazing vantage point to observe these changes up close and learn more about exactly why they happen.”

Water is a major volatile component of comets, along with carbon monoxide, methanol and ammonia. MIRO is designed to help determine the abundance of each of these ingredients, in order to understand the nature of the comet’s nucleus, the process of outgassing and where they originate on the surface.

These gases stream away from the nucleus carrying dust, forming the comet’s surrounding ‘coma’. As the comet moves closer to the Sun, its coma will expand and, eventually, pressure from the solar wind will cause some of the material to stream out into a long tail.

Rosetta will be there to watch these developments up close. The comet – and Rosetta – will make its nearest approach to the Sun in August 2015, between the orbits of Earth and Mars.

Determining the changes in production rate of water vapour and other gases as the icy object moves around the Sun is important for comet science. But it is also vital for mission planning, because once Rosetta is closer to the comet, the outflow of gases may alter the craft’s trajectory.

“Our comet is coming out of its deep-space slumber and beginning to put on a show for Rosetta’s science instruments,” says Matt Taylor, ESA’s Rosetta project scientist.

“Rosetta’s engineers will also be using MIRO’s observations to help them plan for future mission events when we are operating close to the comet’s nucleus.”

Today, the spacecraft is within 72 000 km of its destination. Six out of a total of ten rendezvous manoeuvres still need to be carried out to ensure that Rosetta arrives at a distance of just 100 km from the nucleus on 6 August.