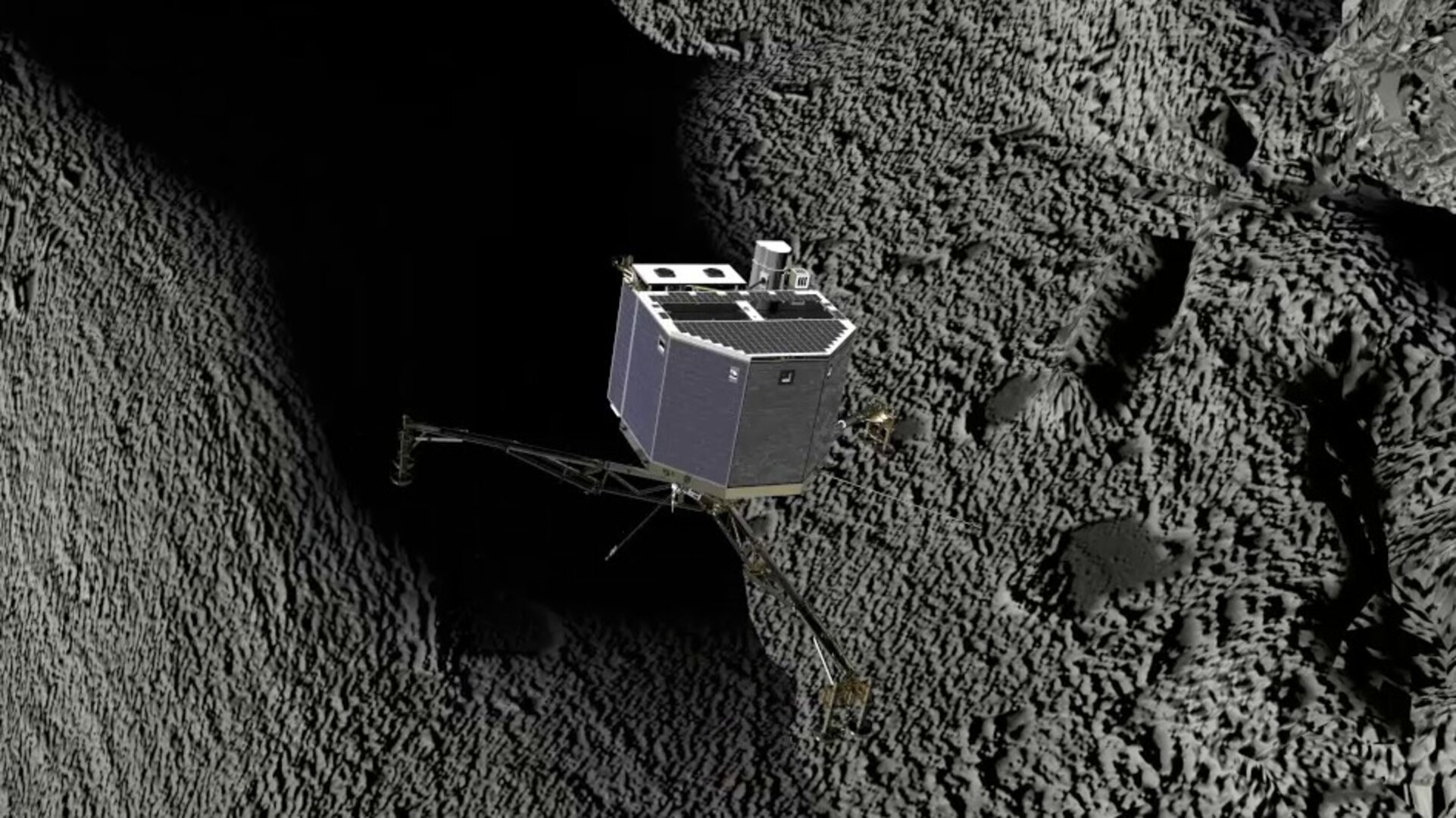 Silent since its last call to mothership Rosetta seven months ago, the Philae lander is facing conditions on Comet 67P/Churyumov–Gerasimenko from which it is unlikely to recover.

Rosetta, which continues its scientific investigations at the comet until September before its own comet-landing finale, has in recent months been balancing science observations with flying dedicated trajectories optimised to listen out for Philae. But the lander has remained silent since 9 July 2015.

“The chances for Philae to contact our team at our lander control centre are unfortunately getting close to zero,” says Stephan Ulamec, Philae project manager at the German Aerospace Center, DLR. “We are not sending commands any more and it would be very surprising if we were to receive a signal again.”

Philae’s team of expert engineers and scientists at the German, French and Italian space centres and across Europe have carried out extensive investigations to try to understand the status of the lander, piecing together clues since it completed its first set of scientific activities after its historic landing on 12 November 2014.

A story with incredible twists and turns unfolded on that day. In addition to a faulty thruster, Philae also failed to fire its harpoons and lock itself onto the surface of the comet after its seven-hour descent, bouncing from its initial touchdown point at Agilkia, to a new landing site, Abydos, over 1 km away. The precise location of the lander has yet to be confirmed in high-resolution images.

A reconstruction of the flight of the lander suggested that it made contact with the comet four times during its two-hour additional flight across the small comet lobe. After bouncing from Agilkia it grazed the rim of the Hatmehit depression, bounced again, and then finally settled on the surface at Abydos.

Even after this unplanned excursion, the lander was still able to make an impressive array of science measurements, with some even as it was flying above the surface after the first bounce.

Once the lander had made its final touchdown, science and operations teams worked around the clock to adapt the experiments to make the most of the unanticipated situation. About 80% of its initial planned scientific activities were completed.

In the 64 hours following its separation from Rosetta, Philae took detailed images of the comet from above and on the surface, sniffed out organic compounds, and profiled the local environment and surface properties of the comet, providing revolutionary insights into this fascinating world.

But with insufficient sunlight falling on Philae’s new home to charge its secondary batteries, the race was on to collect and transmit the data to Rosetta and across 510 million kilometres of space back to Earth before the lander’s primary battery was exhausted as expected. Thus, on the evening of 14–15 November 2014, Philae fell into hibernation.

As the comet and the spacecraft moved closer to the Sun ahead of perihelion on 13 August 2015 – the closest point to the Sun along its orbit – there were hopes that Philae would wake up again.

Estimates of the thermal conditions at the landing site suggested that the lander might receive enough sunlight to start warming up to the minimum –45ºC required for it to operate on the surface even by the end of March 2015.

It is worth noting that if Philae had remained at its original landing site of Agilkia, it would have likely overheated by March, ending any further operations.

On 13 June 2015, the lander finally hailed the orbiting Rosetta and subsequently transmitted housekeeping telemetry, including information from its thermal, power and computer subsystems.

Subsequent analysis of the data indicated that the lander had in fact already woken up on 26 April 2015, but had been unable to send any signals until 13 June.

The fact that the lander had survived the multiple impacts on 12 November and then unfavourable environmental conditions, greatly exceeding the specifications of its various electronic components, was quite remarkable.

After 13 June, Philae made a further seven intermittent contacts with Rosetta in the following weeks, with the last coming on 9 July. However, the communications links that were established were too short and unstable to enable any scientific measurements to be commanded.

Despite the improved thermal conditions, with temperatures inside Philae reaching 0ºC, no further contacts were made as the comet approached perihelion in August.

However, the months around perihelion are also the comet’s most active. With increased levels of outflowing gas and dust, conditions were too challenging for Rosetta to operate safely close enough to the comet and within the 200 km where the signals had previously been detected from Philae.

In more recent months, the comet’s activity has subsided enough to make it possible to approach the nucleus again safely – this week the spacecraft reached around 45 km – and Rosetta has made repeated passes over Abydos.

No signal has been received, however. Attempts to send commands ‘in the blind’ to trigger a response from Philae have also not produced any results.

The mission engineers think that failures of Philae’s transmitters and receivers are the most likely explanation for the irregular contacts last year, followed by continued silence into this year.

Another difficulty that Philae may be facing is dust covering its solar panels, ejected by the comet during the active perihelion months, preventing the lander from powering up.

Also, the attitude and even location of Philae may have changed since November 2014 owing to cometary activity, meaning that the direction in which its antenna is sending signals to Rosetta is not as predicted, affecting the expected communication window.

“Eventually we will be able to fly in ‘bound orbits’ again, approaching to within 10–20 km – and even closer in the final stages of the mission – putting us in a position to fly above Abydos close enough to obtain dedicated high-resolution images to finally locate Philae and understand its attitude and orientation.”

“Determining Philae’s location would also allow us to better understand the context of the incredible in situ measurements already collected, enabling us to extract even more valuable science from the data,” says Matt Taylor, ESA’s Rosetta project scientist.

“Philae is the cherry on the cake of the Rosetta mission, and we are eager to see just where the cherry really is!”

At the same time, Rosetta, Philae and the comet are heading back out towards the outer Solar System again. They have crossed the orbit of Mars and are now some 350 million km from the Sun. According to predictions, the temperatures should be falling far below those at which Philae is expected to be able to operate.

Nevertheless, while hopes of making contact again with Philae dwindle, Rosetta will continue to listen for signals from the lander as it flies alongside the comet ahead of its own comet landing in September.

“We would be very surprised to hear from Philae again after so long, but we will keep Rosetta’s listening channel on until it is no longer possible due to power constraints as we move ever further from the Sun towards the end of the mission,” says Patrick Martin, ESA’s Rosetta mission manager.

“Philae has been a tremendous challenge and for the lander teams to have achieved the science results that they have in the unexpected and difficult circumstances is something we can all be proud of.

“The combined achievements of Rosetta and Philae, rendezvousing with and landing on a comet, are historic high points in space exploration.”

Notes for Editors
Lander contacts were made on 13, 14, 19, 20, 21, 23 and 24 June, and 9 July 2015. Housekeeping data were transferred from Philae to Rosetta on all but the 23 June contact. Background information about Philae’s wake-ups last year is discussed in our September blog post “Understanding Philae’s wake-up”.

Rosetta is an ESA mission with contributions from its Member States and NASA. Rosetta’s Philae lander was contributed by a consortium under the leadership of DLR, MPS, CNES and ASI.