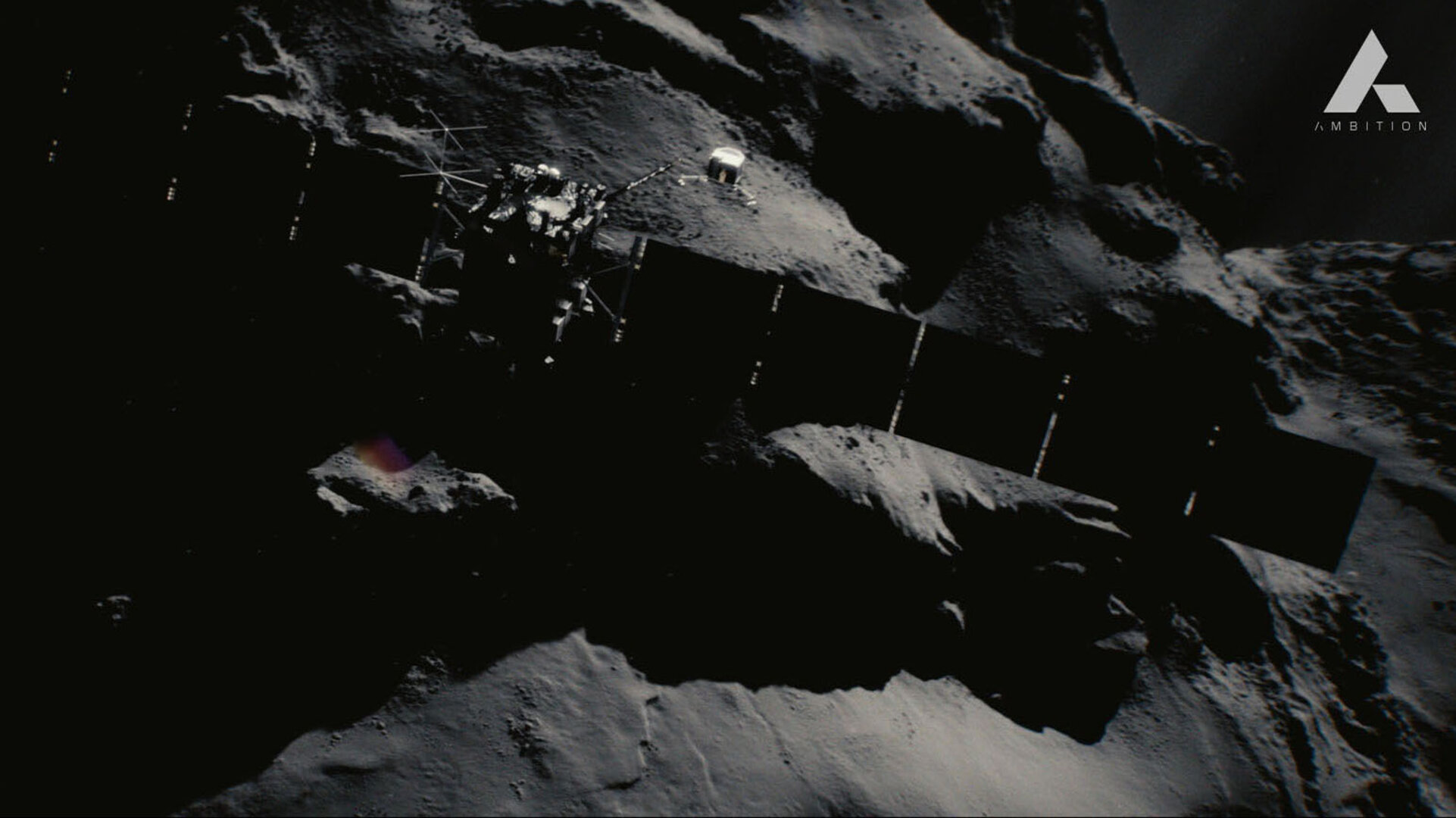 Imagine: with a wasteland as their canvas, a Master and his young Apprentice set about turning rubble into planets and moons, asteroids and comets. They levitate the worlds above their heads, spinning them in orbit around their symbolic Sun.

“What is the key to life on Earth?” asks the Master.

The Apprentice shakes her head. The answer is obvious: water.

“For a long time, the origins of water, and indeed life on our planet remained an absolute mystery. So we began searching for answers beyond Earth,” the Master continues.

“In time we turned to comets. One trillion celestial balls of dust, ice, complex molecules, left over from the birth of our Solar System. Once thought of as messengers of doom and destruction, and yet so enchanting.

“And we were to catch one: a staggeringly ambitious plan.”

As Tomek Bagiński’s short film Ambition makes clear, it is the essence of what it means to be human, to attempt difficult things, to reach for seemingly impossible goals, to learn, adapt and evolve.

And at the heart of this film is Rosetta, ESA’s real mission to rendezvous with, escort and land on a comet. A mission that began as a dream, but that after decades of planning, construction and flight through the Solar System, has arrived at its goal. 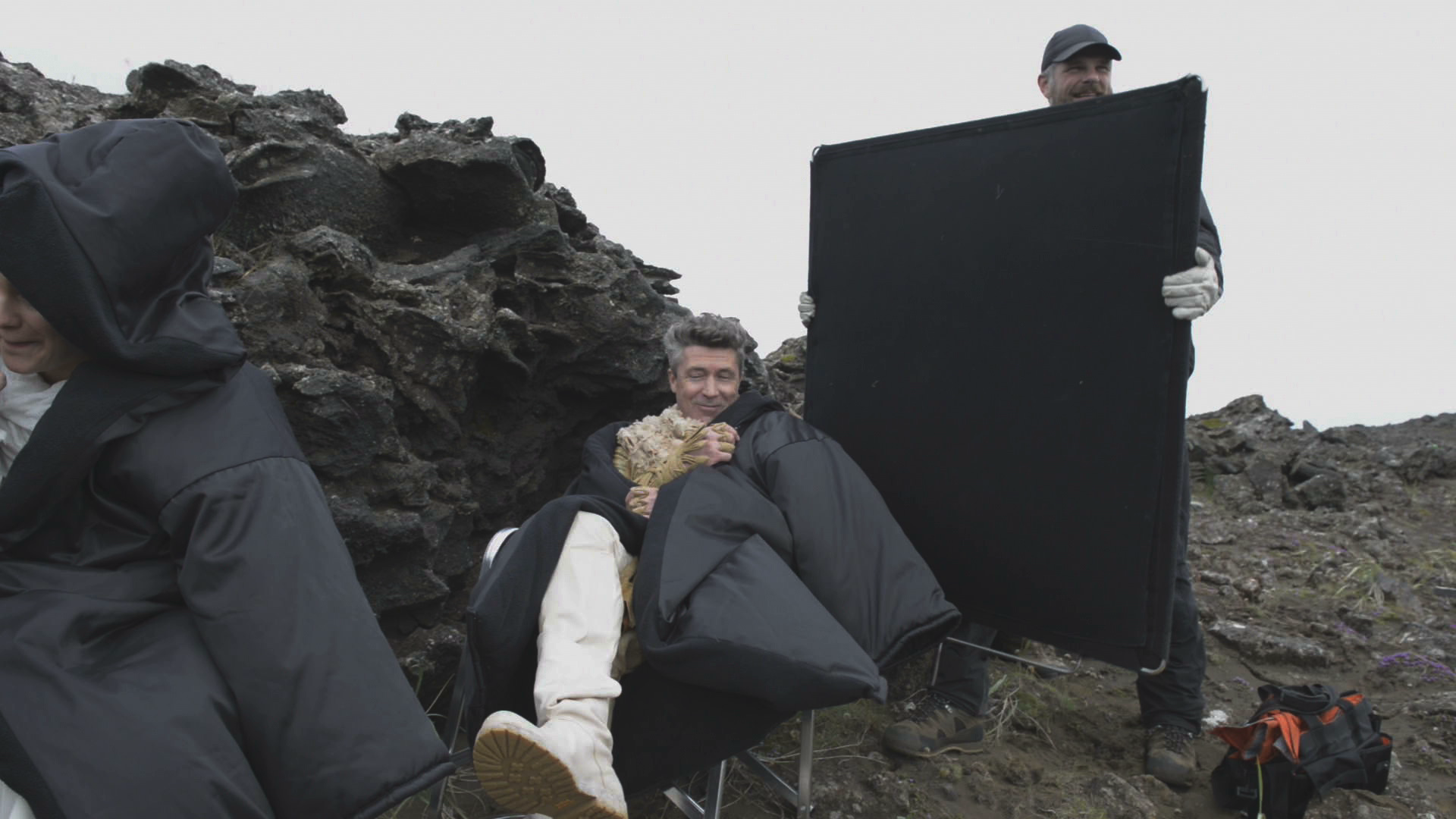 Its aim? To unlock the secrets hidden within the icy treasure chest for 4.6 billion years. To study its make-up and its history. To search for clues as to our own origins.

From 100 km distance, to 50, 30 and then, defying all expectations, to just 10 km, Rosetta continues to captivate and intrigue with every image and every data packet returned.

It will rewrite the textbooks of cometary science.

But there is more, an even greater challenge, another ambitious first: to land on the comet.

“As a science fiction writer, it’s hard to think of a more stirring theme than the origin and ultimate destiny of life in the Universe,” says Alastair Reynolds.

“With the arrival of Rosetta at 67P/Churyumov–Gerasimenko – an astonishing, audacious technical achievement, literally the stuff of science fiction – we are on the brink of a bold new chapter in our understanding of our place in the Universe.”

“Rosetta is less than 10 km from a comet, and both are racing through space at over 60 000 km/h,” says Matt Taylor, ESA’s Rosetta project scientist.

“Next month, we’ll be attempting to land on the comet, and with our orbiting spacecraft, we’ll continue to keep pace with the comet for another year or more, watching how it evolves over time.

“All of this is new and unique and has never been done before. It may sound like science fiction, but it’s a reality for the teams that have dedicated their entire lives to this mission, driven to push the boundaries of our technology for the benefit of science and to seek answers to the biggest questions regarding our Solar System’s origins.”

Ambition is a collaborative project of ESA and Platige Image. Directed by Tomek Baginski and starring Aiden Gillen and Aisling Franciosi, it was shot on location in Iceland, and screened on 24 October during the British Film Institute’s celebration of Sci-Fi: Days of Fear and Wonder, at the Southbank, London.

Director Tomek Baginski will look to build on the considerable success of his debut films The Cathedral, Fallen Art and The Kinematograph, each of which garnered significant international praise and awards success. The Cathedral was nominated for an Academy Award® in 2003, Fallen Art won a BAFTA Award in 2006, while The Kinematograph was nominated for the Golden Lion at the Venice Film Festival in 2009.

Focused on delivering storytelling in the form of computer animation and live action movies, with a significant VFX component, the prize-winning studio has created multiple award-winning short films, commercials and innovative and original projects.

About the British Film Institute

The BFI is the lead body for film in the UK with the ambition to create a flourishing film environment in which innovation, opportunity and creativity can thrive.

Sci-Fi: Days Of Fear And Wonderis the BFI’s biggest season to date, with more than 1000 screenings of classic films and television programmes at over 200 locations across the UK.  It includes a three-month programme at BFI Southbank, from 20 October until 31 December 2014, with special events, guests and screenings right across the UK.

With outdoor events at iconic British sites, classic science fiction titles released into UK cinemas and on DVD and Blu-ray, 50+ films available online through BFI Player and a BFI Sci-Fi Compendium, Sci-Fi: Days Of Fear And Wonder, presented together with O2, will celebrate cinema’s most spectacular and visionary genre, exploring how the fear and wonder at its heart continues to inspire and enthral in one of the largest and most ambitious science fiction projects ever created.