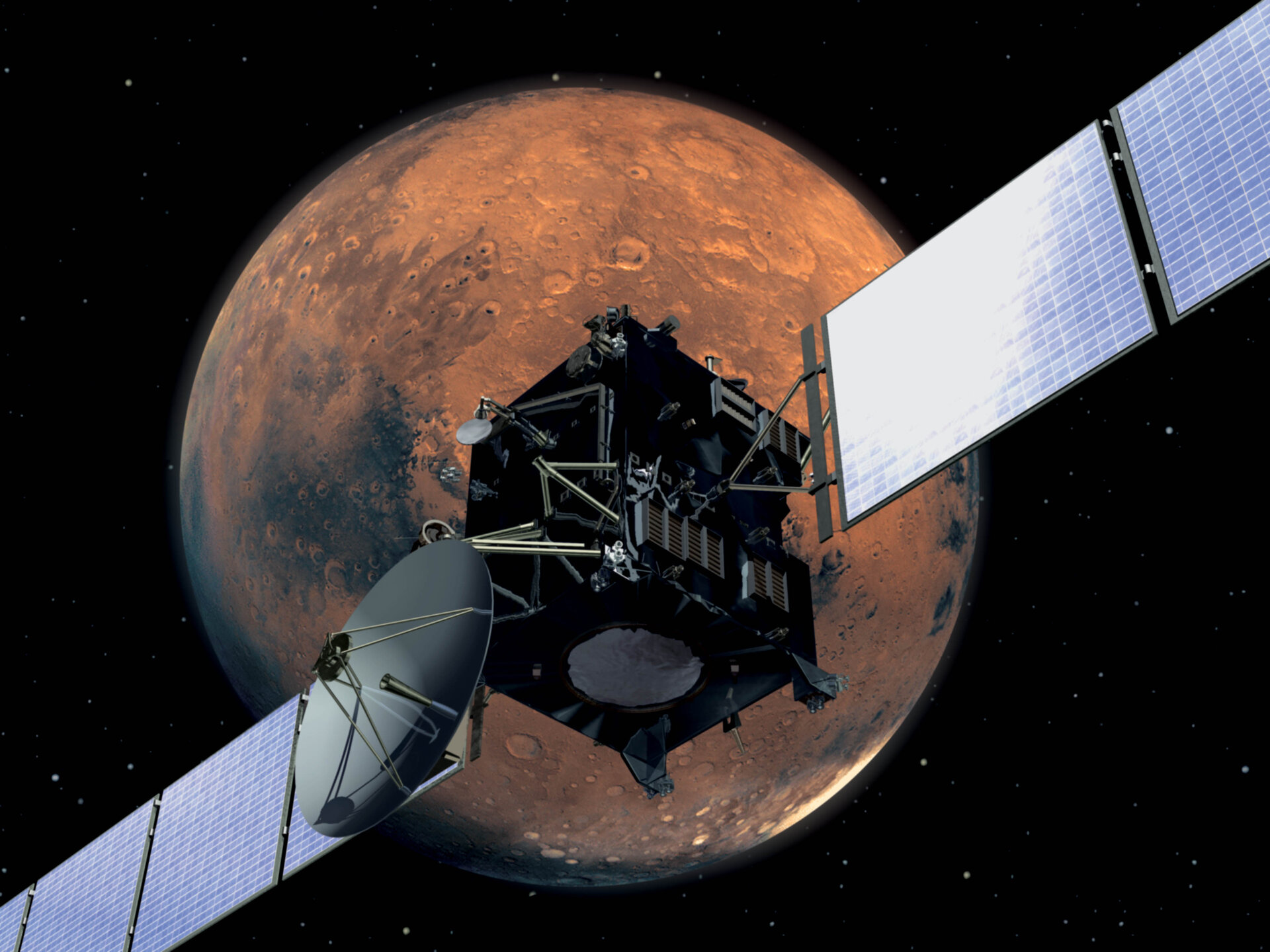 This month the team working on ESA's Rosetta mission have been particularly busy. Activities are underway to set the spacecraft's trajectory and prepare the on-board instruments ready for the next major mission milestone: the swing-by of planet Mars in February 2007.

Since its launch in March 2004, Rosetta has been bouncing around the inner solar system on a trajectory that will eventually lead it to its final destination in the first half of 2014 – comet 67P Churyumov-Gerasimenko. As the three-tonne spacecraft could not be set by its launcher onto a trajectory that would take it directly to the comet, a series of four planetary gravity-assisted manoeuvres were introduced into the mission design.

Swing-bys allow a spacecraft to gain energy in a 'natural' way by exploiting the gravitational energy of massive planetary bodies such as planets, similar to the way in which a slingshot is used to release a stone.

To aim Rosetta precisely at Mars, two deep-space manoeuvres were carried out on 29 September and 13 November of this year. Rosetta will make its closest approach to Mars on 25 February when it will be just 250 km above its surface.

Close vicinity to the planet is essential for the spacecraft to make the most efficient use of the swing-by, however, this also makes the manoeuvre complex. This is why mission controllers at ESA's European Space Operations Centre (ESOC) in Germany are carefully monitoring the spacecraft's path in space and preparing to perform trajectory correction manoeuvres 16 and 7 days before Rosetta makes its closest approach to Mars.

Rosetta's close vicinity to Mars will also provide an excellent opportunity to take a close look at the planet. Using the on-board instruments both on the orbiter and the Philae lander, the Rosetta scientists will be able to calibrate their instruments and complement ESA's Mars Express data by carrying out a 'mini' observation campaign in the weeks around the Mars swing-by. Science operations will start at the beginning of January 2007 and be 'formally' concluded at the end of March.

In preparation for the Mars' observation, earlier this week mission controllers at ESOC commenced a full series of instrument checks. These operations, which included switching on the instruments and checking their pointing performance, will last about a month.

Between 2 and 3 January 2007 Rosetta will 'warm-up' its on-board camera OSIRIS to take a look at the asteroid 21-Lutetia that lies between the orbits of Mars and Jupiter in the Asteroid Belt. The purpose of this 36-hour observation campaign is to understand the rotation direction of the asteroid. This valuable information will enable scientists to characterise this target so that Rosetta can study it in greater detail in July 2010, when the spacecraft will pass within about 2000 km of the asteroid.

Rosetta will be able to observe Mars from about 20 hours before it makes its closest approach to about a few weeks after. Before making its close approach to Mars, priority will be given to spacecraft operations. If the in-flight tests planned for 7 January reveal that the spacecraft's illumination and thermal conditions are not favourable for its own navigational security, then all the science operations that are to be carried out before it makes its close approach will have to be cancelled.

In any event, just around the time of closest approach, the orbiter's instruments will be switched off for about three hours, and the spacecraft will be put in eclipse mode. This is to prepare the spacecraft for a period of eclipse that will last for 25 minutes and take place as Rosetta goes behind Mars and enters its shadow. During this eclipse period the solar arrays will not 'see' the Sun and will not be able to produce any power.

However, a few scientific instruments on the Philae lander will still be operating and taking measurements during the eclipse as the lander has its own independent power system. This is because once the lander is on the surface of the comet, ready to carry out its mission, it has to survive autonomously without the orbiter's support.

Rosetta will use its imaging system and imaging spectrometers to gather data about the surface and atmosphere of Mars and its chemical composition. It will also collect data about the atmosphere's interaction with the solar wind and the Martian radiation environment, and it will image the two natural satellites of Mars: Phobos and Deimos.

During the Mars swing-by, Rosetta's velocity and trajectory will also be accurately measured to check if any anomalous spacecraft acceleration can be observed.