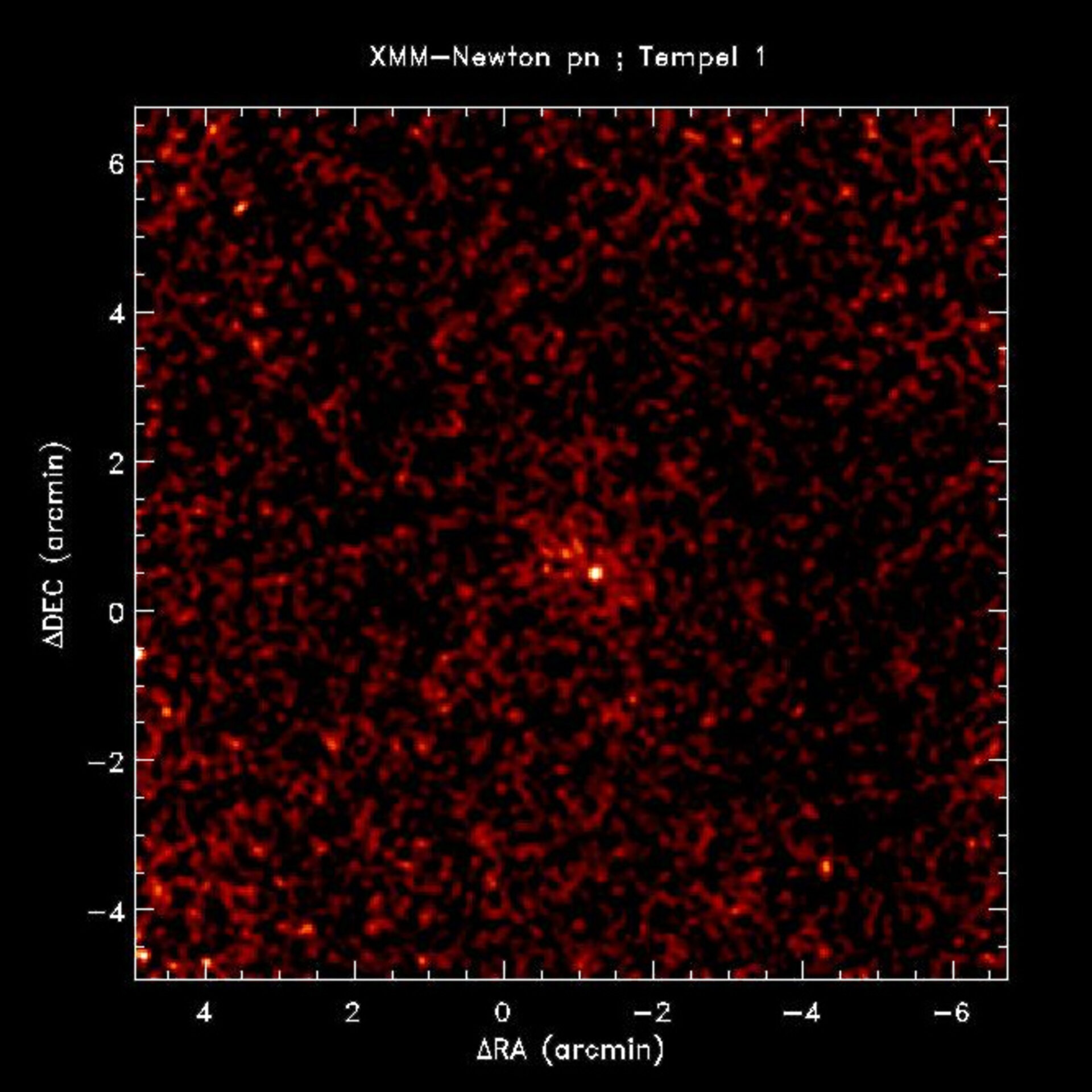 ESA's XMM-Newton observations of Comet 9P/Tempel 1 revealed that the object is a weak X-ray source. These data were acquired on 4 July 2005 by one of the EPIC X-ray cameras on board the spacecraft during the post-impact observation phase.

XMM-Newton observed that Tempel 1 emits X-rays, as suspected from previous observations of comets, but this emission is very weak. It is not certain whether it is possible to obtain spectral data which indicate the mechanisms by which the comet's X-rays are produced. Further analysis of the XMM-Newton data is needed to confirm this.

There are two theories to explain why comets emit X-rays. In the first theory, X-rays are produced by a charged exchange between neutral particles present in the comet's coma and ionised particles carried by the solar wind. This has been demonstrated already for several comets in the past.

The second explanation is that the X-rays are just solar X-rays scattered by the dust present in the coma. This could happen during comet outbursts, as observations of Comet Hale-Bopp indicated in 1996. A combination of both mechanisms is also possible.

Even without the task of analysing these weak X-rays, observing the X-ray emission from moving objects like Tempel 1 is already a complex enough task for an X-ray telescope. In fact, XMM-Newton is best suited to studying 'fixed' X-ray sources in the sky. Special planning and processing techniques were required to overcome this observational challenge.

During the observations, XMM-Newton was pointed in the direction of the comet as if it was fixed in the sky, and its instruments were exposed to the radiation (photons) coming from it.

The photons coming from the moving comet were received by the relatively stationary XMM-Newton instruments. Scientists used the arrival time and direction associated with each detected photon to deduce its distance from the comet's nucleus.

Every photon was then 'transformed' mathematically, as if it came from a 'virtual' comet fixed in the sky like the more distant stars. In this way, scientists could treat the comet as a non-moving object.

Scientists then 'cleaned' the data files, by removing those times where the cosmic background radiation was disturbing the observations.