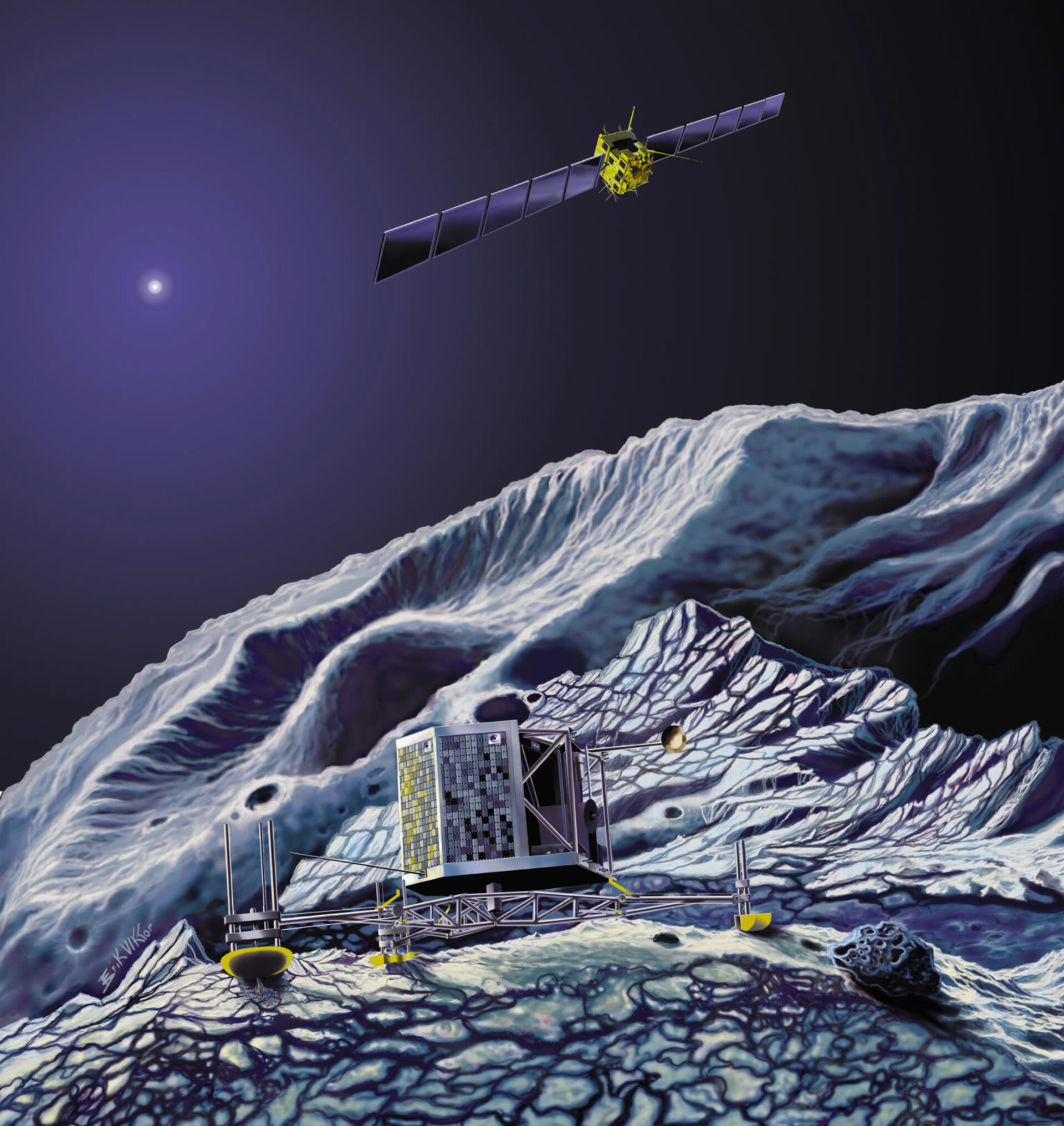 ESA INFO 03-2004. The countdown to Rosetta’s rendezvous in space began on 1 March 1997. At the end of February 2004, seven years and not a few headaches later, the European Space Agency (ESA) probe will at last be setting off on its journey to meet 67P/Comet Churyumov-Gerasimenko.

The long-planned get-together will not however take place until the middle of 2014. A few months after arriving at the comet, Rosetta will release a small lander onto its surface. Then, for almost two years it will investigate Churyumov-Gerasimenko from close up.

Dr Gerhard Schwehm, lead scientist for the Rosetta project, explains that, “With this mission we will be breaking new ground - this will be the first protracted cometary encounter.” The trip to the meeting place in space will certainly be a long one, located as it is some 4.5 astronomical units from the Sun, which translates into something like 675 million kilometres. Rosetta will be on the road for ten years, during which time it will clock up in excess of five billion kilometres.

Rosetta will be waved off on 26 February when it lifts off from the space centre in Kourou, French Guiana, aboard an Ariane 5 launcher. Shortly after the spacecraft’s release, its solar panels will be deployed and turned towards the Sun to build up the necessary power reserves. Its various systems and experiments will be gradually brought into operation and tested. Just three months into the mission the first active phase will be over, followed by final testing of the experiments in October 2004. Rosetta will then spend the following years flying a lonely path to the comet, passing by the Earth, Mars, the Earth and the Earth again.

There is no alternative to this detour, for even Ariane 5, the most powerful launcher on the market today, lacks the power to hurl the probe on a direct route to the comet. To get the required momentum, it will rely on swing-by manœuvres, using the gravitation pull of Mars (in 2007) and the Earth (three times, in 2005, 2007 and 2008) to pick up speed.

A change is as good as a rest, and a meeting with at least one asteroid should help break the monotony for Rosetta. The spacecraft will come close to an asteroid at the end of 2008. Asteroids are, it will be remembered, rocky bodies, some as large as mountains, some even larger, that orbit the Sun in much the same way as planets.

“These ‘brief encounters’ are a scientific opportunity and also a chance to test Rosetta’s instrument payload,” says Gerhard Schwehm. But asteroid exploration also serves an entirely practical purpose: “The more we find out about them, the better the prospect of being able one day to avert a possible collision.” Following a period of low-activity cruising, the probe’s course will be adjusted one last time in May 2011. From July 2011, a further two-and-a-half years' radio silence will be observed, and Rosetta, left entirely to its own resources, will fly close to the Jupiter orbit.

Finally, in January 2014, the probe will be reactivated and will, by October 2014, be only a few kilometres distant from Churyumov-Gerasimenko. This is where the dream of so many scientists becomes reality. Having deposited its precious lander cargo on the comet’s surface, Rosetta will continue to orbit Churyumov-Gerasimenko and together they will spend the next seventeen months flying towards the Sun.

Rosetta was built by an international consortium led by Astrium. The lander probe was developed in Cologne under the aegis of the DLR, Germany’s space agency, with contributions from ESA and research centres in Austria, Finland, France, Hungary, Ireland, Italy and Great Britain.

The comet explorer carries ten scientific instruments. Their job is to draw out the secrets of the comet’s chemical and physical composition and reveal its magnetic and electrical properties. Using a specially designed camera, the lander will take pictures in the macro and micro ranges and send all the data thus acquired back to Earth, via Rosetta.

“This will be our first ever chance to be there, at first hand, so to speak, as a comet comes to life,” Schwehm goes on to explain. When Churyumov-Gerasimenko gets to within about 500 million kilometres of the Sun, the frozen gases that envelop it will evaporate and a trail of dust will be blown back over hundreds of thousands of kilometres. When illuminated by the Sun, this characteristic comet tail then becomes visible from Earth. In the course of the mission, the processes at work within the cometary nucleus will be studied and measured more precisely than has ever before been possible, for earlier probes simply flew past their targets.

“As we will be accompanying Churyumov-Gerasimenko for two years, until the comet reaches its closest point to the Sun and travels away from it, we can at long last hope to acquire new knowledge about comets. We are confident we will come a step nearer to understanding the origins and formation of our solar system and the emergence of life on Earth.”

More information on the Rosetta launch can be found on: http://www.esa.int/rosetta