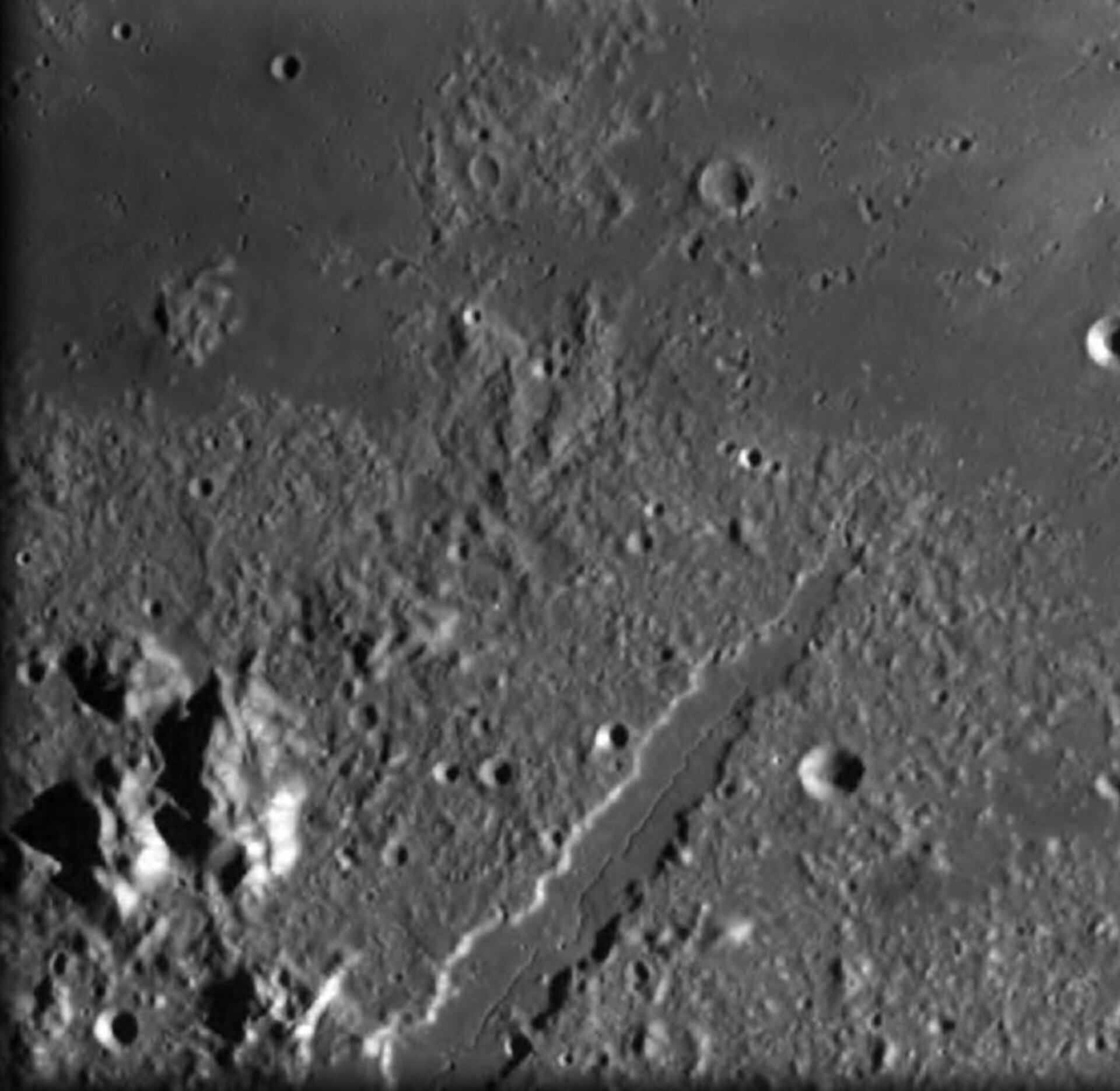 This image, taken by the Advanced Moon Micro-Imager Experiment (AMIE) on board ESA’s SMART-1 spacecraft, shows the lunar Alps (Montes Alpes) on the Moon.

AMIE obtained this image from a distance of about 3000 kilometres, with a resolution of 300 metres per pixel. The field of view of this image is about 150 kilometres and is centred on an area around 48.5° North, 3.2° East.

The European Alps were formed over millions of years by slow-moving sections of Earth’s crust pushed together, squeezing the land to form a giant arc of upthrust mountains, but the lunar Alps were formed in an instant. It is thought that the Moon collided with a huge object, such as an asteroid, 3850 million years ago. The collision formed a huge crater, about 1000 kilometres in diameter.

This crater was later filled with basaltic lava, forming the dark circular basin known as Mare Imbrium (Sea of Rains). After the explosive collision, fragments, rocks and dust fell back to the surface. While there is considerable debate as to the actual mechanism which formed the concentric rings, it is agreed they are not 'fallback' material.

Some scientists argue that the the impact caused the lower layers to act as a liquid and that the rings then 'froze' in place. A flood of lava covered the lower inner one, but the outer one remains as a series of arc-shaped mountain ranges.

In places these mountains rise over 3000 metres. Their inner walls are steep and well defined, but their outer slopes become more broken as elevation decreases away from the impact site. Early European astronomers named them after familiar mountain ranges, such as the Juras, the Apennines and the Alps.

Seen in this image, Vallis Alpes (Alpine Valley) is a spectacular feature that bisects the Montes Alpes range. This valley was discovered in 1727 by Francesco Bianchini. It extends 166 kilometres from Mare Imbrium, trending north-east to the edge of the Mare Frigoris (Sea of Cold). The valley is narrow at both ends and widens to about 10 kilometres across.

The valley floor is a flat, lava-flooded surface that has narrow sinous ‘rille’ running down the middle. It is generally considered to be a 'graben', an area between two parallel faults which has dropped below the surrounding area. This is believed to have formed after the formation of the basin, but before the full maria lava flows. The rille corresponds to a ‘lava tube’ formed in a later geological episode by high-speed and low viscosity magma.

"SMART-1 is studying the signature of violent processes that took place during the formation of these giant impact basins, as well as the sequence of late volcanic history over the lunar surface until 3000 million years ago,” said ESA’s SMART-1 Project Scientist Bernard Foing.