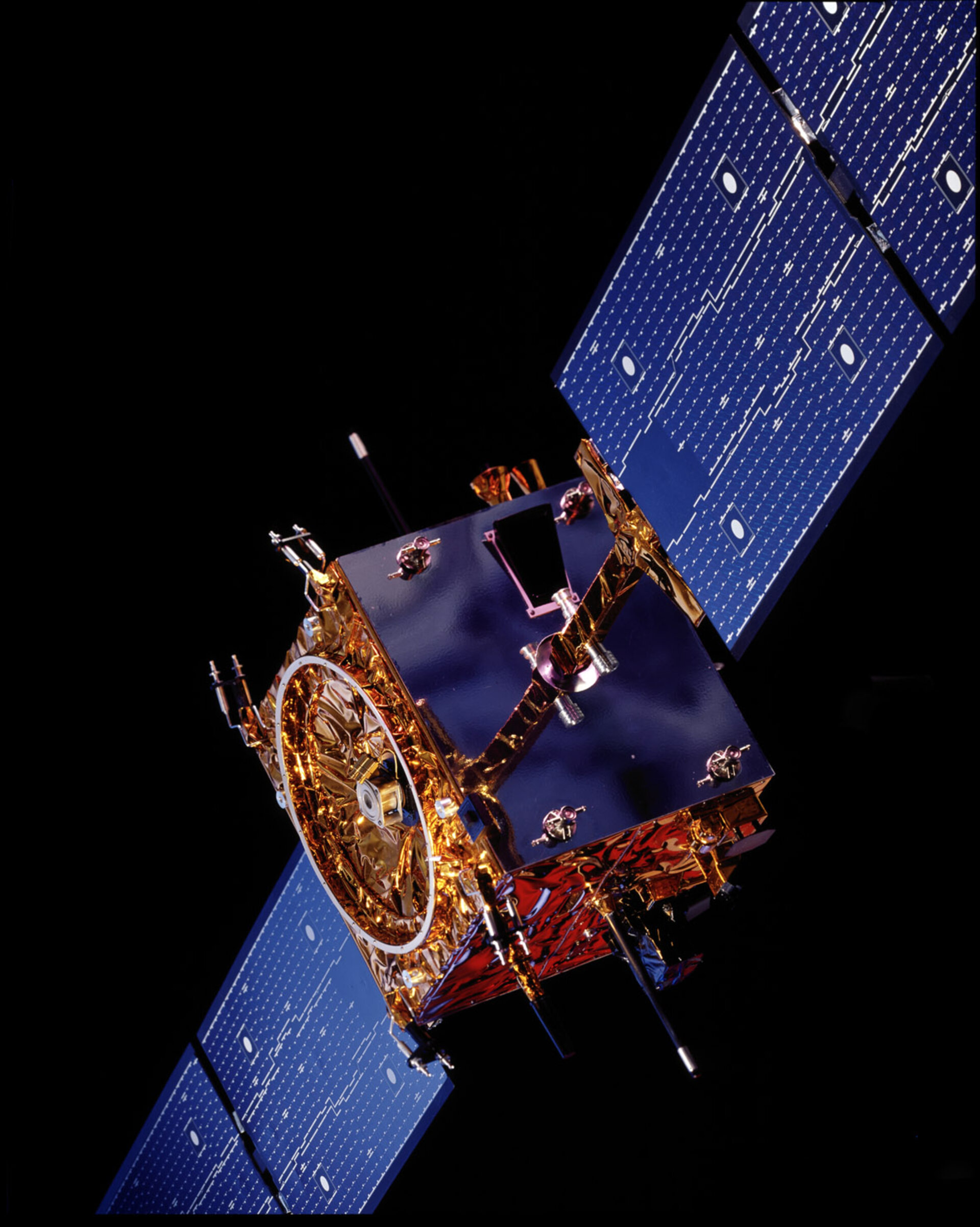 ESA PR 50-2003. Europe’s first probe to the Moon, SMART-1, is about to begin a unique journey that will take it into orbit around our closest neighbour, powered only by an ion engine which Europe will be testing for the first time as main spacecraft propulsion.

The European Space Agency’s SMART-1 spacecraft was delivered to Kourou, French Guiana, on July 15 and is currently being prepared for launch atop an Ariane 5 during the night from August 28 to 29. The launch window will open at 20:04 local time (01:04 on August 29 morning CEST) and will remain open for 26 minutes.

The 367 kg spacecraft will share Ariane’s V162 launch with two commercial payloads: the Indian Space Research Organisation’s Insat 3E and Eutelsat’s e-Bird communication satellites. The smallest spacecraft in the trio, SMART-1, will travel in the lower position, inside a cylindrical adapter, and will be the last to be released.

A generic Ariane 5 will be in charge of placing these three payloads in a standard geostationary transfer orbit from which each will begin its own journey towards its final operational orbit. SMART-1, powered by its ion engine, will reach its destination in about 16 months, having followed a long spiralling trajectory.

SMART-1’s ion engine will be used to accelerate the probe and raise its orbit until it reaches the vicinity of the Moon, some 350,000 to 400,000 km from Earth. Then, following gravity assists from a series of lunar swingbys in late September, late October and late November 2004, SMART-1 will be 'captured' by the Moon’s gravity in December 2004 and will begin using its engine to slow down and reduce the altitude of its lunar orbit.

SMART-1 is not a standard outer space probe. As ESA’s first Small Mission for Advanced Research in Technology, it is primarily designed to demonstrate innovative and key technologies for future deep space science missions. However, once it has arrived at its destination, it will also perform an unprecedented scientific study of the Moon. SMART-1 is a very small spacecraft (measuring just one cubic metre). Its solar arrays, spanning 14 metres, will deliver 1.9 kW of power, about 75% of which will be used for the probe's 'solar electric' propulsion system.

In its role as technological demonstrator, SMART-1’s primary goal is to test this new solar electric propulsion system. This is a form of continuous low-thrust engine that uses electricity derived from solar panels to produce a beam of charged particles that pushes the spacecraft forward. Such engines are commonly called ion engines, and engineers consider them essential for future, long-range space missions. SMART-1 will also test miniaturised spacecraft equipment and instruments, a navigation system that, in the future, will allow spacecraft to autonomously navigate through the solar system, and in addition to a new short-wavelength communication system, a space communication technique by means of which SMART-1 will try to establish a link with the Earth using a laser beam.

Once it enters into a near-polar orbit around the Moon in January 2005, SMART-1 will also become a science platform for lunar observation. SMART-1 will search for signs of water-ice in craters near the Moon’s poles, provide data to shed light on the still uncertain origin of the Moon, and reconstruct its evolution by mapping its topography and the surface distribution of minerals and key chemical elements.

SMART-1 will be the second ESA-led planetary mission to be launched in 2003 after Mars Express in June.