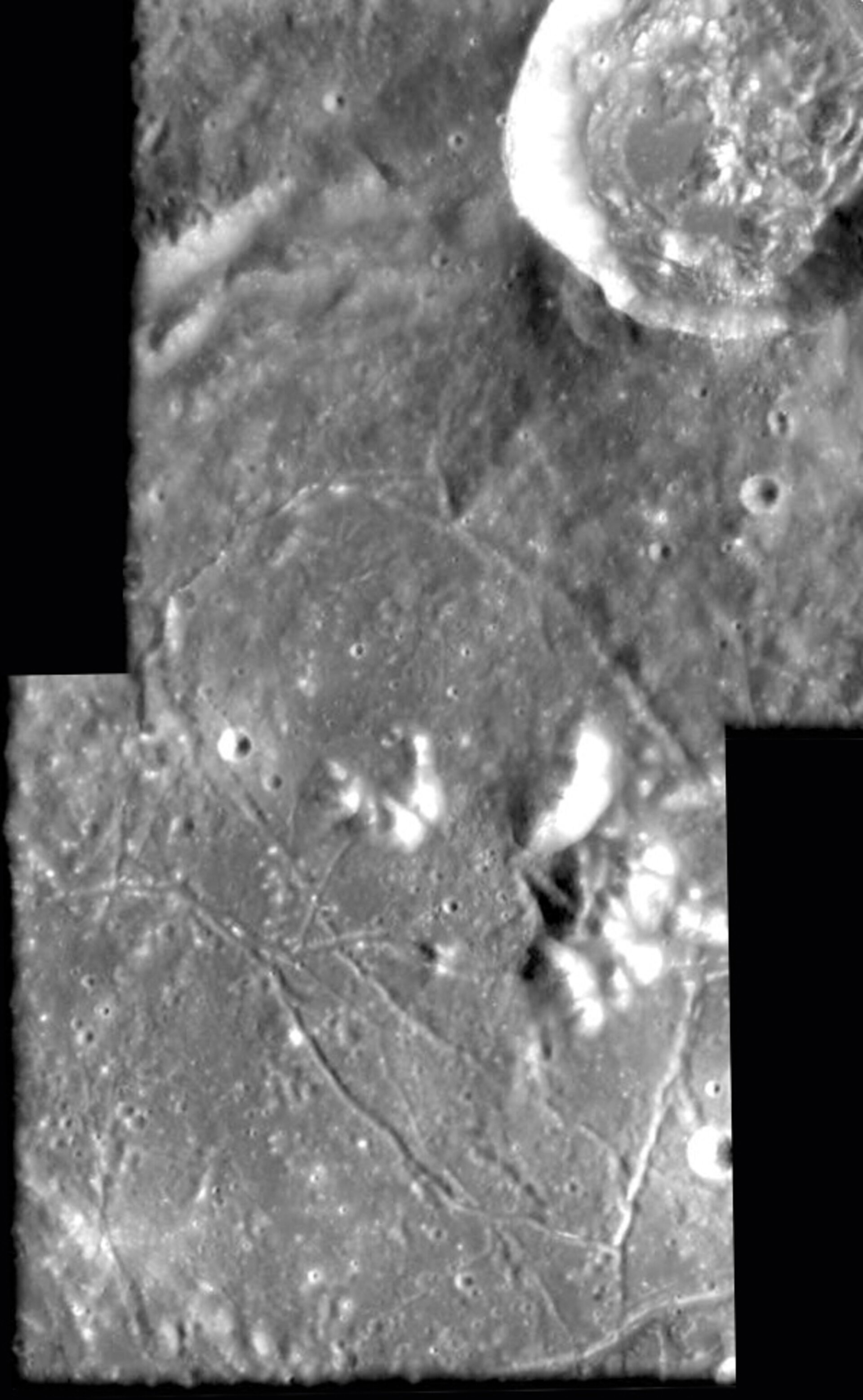 This mosaic of two images, taken by the advanced Moon Imaging Experiment (AMIE) on board ESA's SMART-1 spacecraft, shows the inside of crater Gassendi on the Moon.

AMIE obtained these images on 13 January 2006, one minute apart from each other, from a distance of about 1220 kilometres (top frame) and 1196 kilometres (bottom frame) from the surface, with a ground resolution of 110 and 108 metres per pixel, respectively.

Gassendi is an impact feature located on the near side of the Moon, at the northern edge of Mare Humorum. The crater is actually much larger than the field of view visible in this image. The hills on the lower right of the mosaic are the central peak of the crater, with a height of roughly 1.2 kilometres. The crater almost fully visible on the top is called 'Gassendi A'.

Gassendi is a scientifically interesting site because it offers lunar landers the possibility of sampling ancient highland rocks (in the crater's central peak) as well as providing ages for both the Humorum impact basin and the Gassendi crater itself. However, because the terrain just outside the crater is quite rough, if a crew landed in this region, it would be pretty difficult to reach Gassendi's central peaks for sampling. Gassendi was considered as one of the three potential sites for the Apollo 17 mission, that eventually touched ground in the Taurus-Littrow valley.

The age of Gassendi crater is estimated to be about 3.6 thousand million years (with an error of plus or minus 700 million years).

When observed through spectroscopic analysis, crater Gassendi presents a 'behaviour' very different from any other lunar crater (Mikhail 1979). High resolution studies performed in the near-infrared light (Chevrel and Pinet 1990, 1992) indicated the presence of extrusive volcanic material (that is volcanic material flowing out from the surface and then crystallising) limited to the southern portion of Gassendi's floor, which is adjacent to Mare Humorum.

The interpretation of these data suggested that the central part of the crater, including the peak complex, may have a more 'mafic' nature (that is a composition of rocks coming from the solidification of magma which are rich rich in iron and magnesium silicates, such as olivine and pyroxene), with a higher pyroxene component than surrounding highlands.

The data interpretation also suggested that extensive extrusive volcanism may have occurred within the eastern portion of the floor, as also indicated by the significant presence of pyroxene that also corresponds to visible volcanic features. The western part of the crater floor, away from the geometric continuation of the western edge of Mare Humorum, is composed of highlands-rich material.

The difference between the western and eastern side of the Gassendi floor-fractured crater may be strongly linked to the early thermal history of Mare Humorum.

The crater is named after Pierre Gassendi (1592-1655), French philosopher, scientist and mathematician. In 1631, Gassendi became the first person to observe the transit of a planet across the Sun, viewing the transit of Mercury which Kepler had predicted.