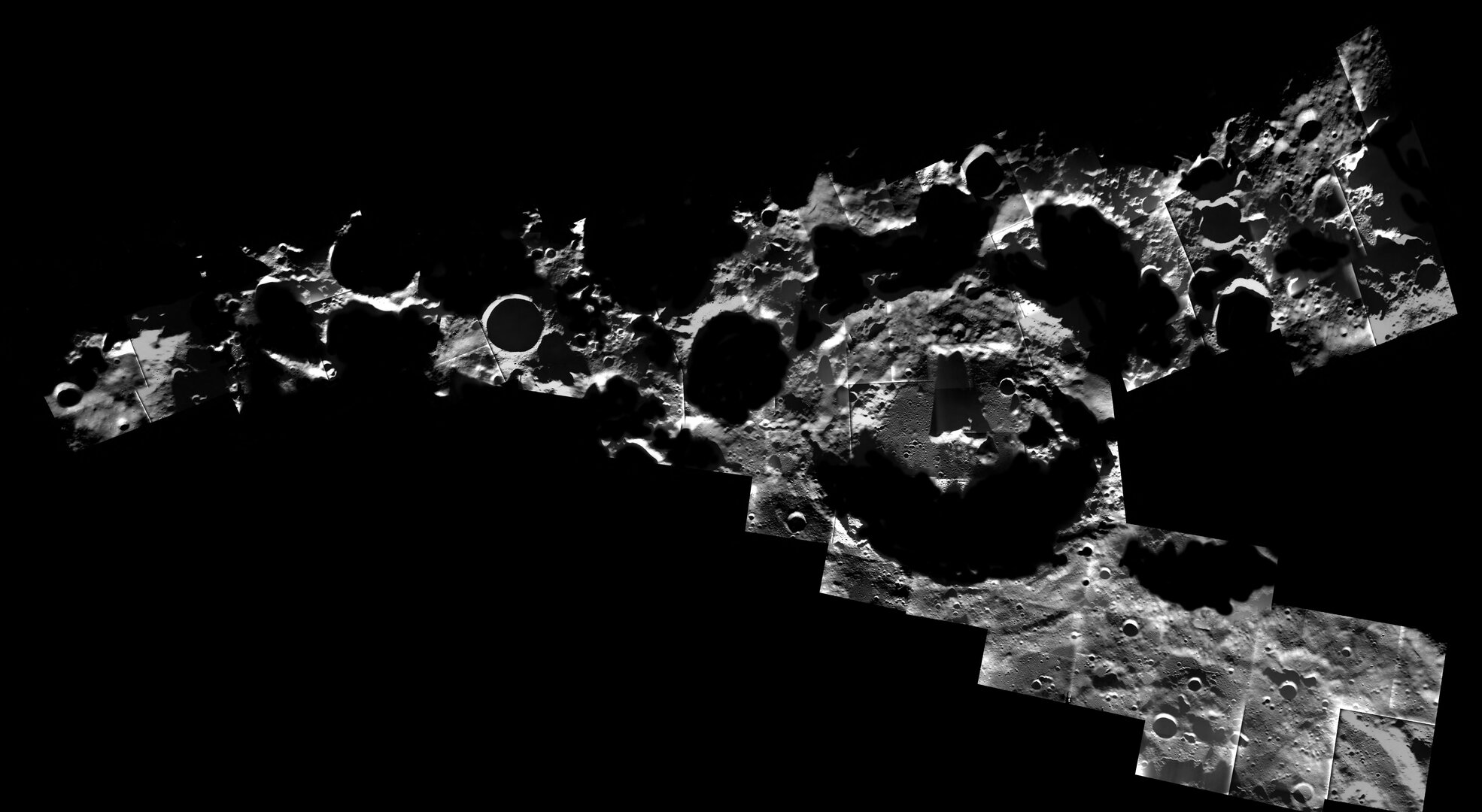 Newly-released images of the lunar south-polar region obtained by ESA’s are proving to be wonderful tools to zero-in on suitable study sites for potential future lunar exploration missions.

SMART-1’s Advanced Moon Imaging Experiment (AMIE) has collected many images of the lunar south-polar region, with unprecedented spatial resolution. The images, obtained over a full year of changing seasons were used to study the different levels of solar illumination on the Moon’s surface.

The orientation of the lunar rotation axis is such that the Sun just about grazes the lunar poles, leaving some regions permanently shadowed.

Shackleton crater is located in the inner ring of the south pole Aitken basin, the largest known impact basin in the solar system. It has a diameter of 2600 km.

The south pole is located on the rim of Shackleton crater. SMART-1 took images around the crater, which is a strong contender for a future robotic and human exploration site and for a permanent human base.

The polar mosaics show geological features of interest within reach from the south pole. Monitoring of the illumination of selected polar sites has allowed scientists to confirm that a ridge located 10 km from the Shackleton rim is prominently illuminated, and could be a strong contender for a potential future lunar outpost.

The large number of impact craters in the area indicates that the terrain is ancient. An example is crater Amundsen, 105 km in diameter, lying 100 km from the pole. It shows central peaks and asymmetric terraces that deserve geological and geochemistry studies.

The Lunar Prospector mission had previously indicated evidence of enhanced hydrogen in the permanent shadowed floors of polar craters, possible sign of water ice – a relevant element when choosing a human outpost.

As to whether or not ice could still be trapped under the floor of polar craters, the former SMART-1 Project Scientist Bernard Foing said, “To understand whether or not water is possibly present at the south pole, we have to take into account the following factors: how volatile elements were delivered to the lunar surface by comets or water-rich asteroids, whether they were destroyed or persisted under a dust cover and for how long they were able to accumulate.”

“The polar regions are still lunar incognita, and it is critical to explore them and study their geological history,” he added.

Using SMART-1 images, SMART-1 AMIE investigators and US collaborators have also counted small impact craters on Shackleton ejecta blanket to estimate the age of the crater. They have found that the number of craters is twice that of Apollo 15 landing site, which would make the Shackleton crater between 3.6 to 4.3 thousand million years old.

“Previous investigators believed Shackleton to be much younger, but that could be due to grazing illumination at the poles, which enhances the topography, mimicking a younger crater.”

So, in view of SMART-1 observations, the south polar site looks even more interesting with the confirmation of prominently-lit sites, and the indication of old craters where ice could have had more time to accumulate in permanently-shadowed areas.

“The SMART-1 south polar maps indicate very exciting targets for science and future exploration, within travel reach from a rover or humans at the south pole”, says Jean-Luc Josset, Principal Investigator for the AMIE.

These high-resolution SMART-1 south polar mosaics were produced and analysed in the framework of a study project for the design and operations of lunar polar robotic landers and rovers, by Marina Ellouzi, a Master’s student in space engineering at the Paris-Meudon Observatory. The south polar mosaics, SMART-1 highlights, and results on the geology and illumination of Shackleton crater are being presented and discussed by the SMART-1 AMIE team and collaborators at the 39th Lunar and Planetary Science Conference at League City, Texas between 11-12 March 2008.