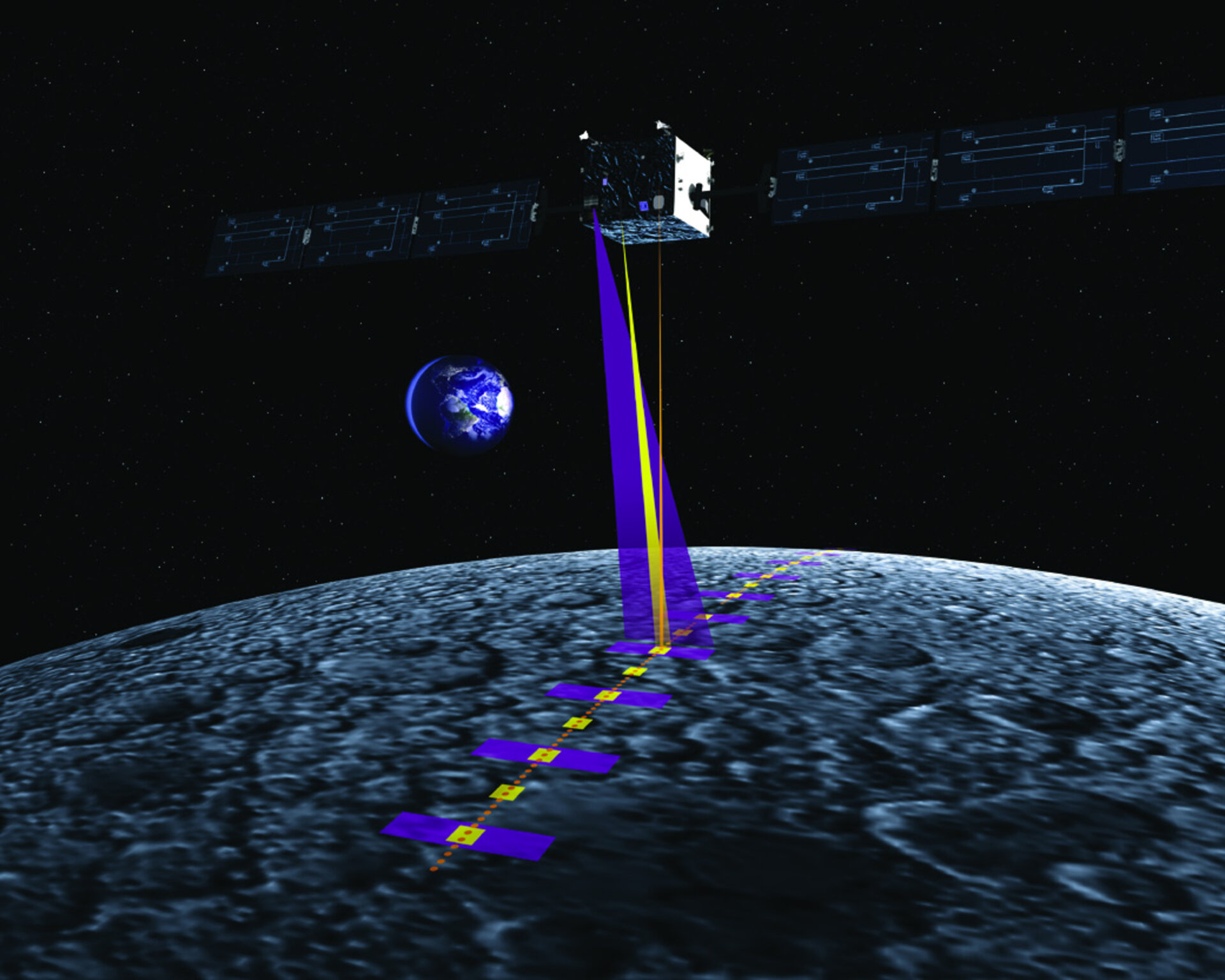 ESA INFO 16-2003. A very efficient engine, plenty of room for instruments, accurate performance, good price. All these features characterise ESA's SMART-1, due for launch during the night of 27-28 September.

SMART-1 is much smaller, cheaper and, in many ways, 'more powerful' than conventional spacecraft. Its secret lies in several new technologies being tested on board, which will be essential for spacecraft of the future. But this space adventure is not only for engineers; scientists too are eagerly awaiting SMART-1 — the first European mission to the Moon.

This is the first of a series of missions designed to test key technologies for future spacecraft —SMART stands for 'Small Missions for Advanced Research and Technology'. In the case of SMART-1, the two main new technologies to be tested are a new 'solar-electric propulsion' system and miniaturised spacecraft and instrumentation. Together, these technologies make up a spacecraft with revolutionary qualities: smaller, lighter, capable of carrying more scientific instruments, greater fuel efficiency. All of which also considerably reduces the cost of the mission.

So, the idea behind SMART-1 is to pioneer a futuristic philosophy, the motto of which could be: 'more science for less money'. Even though it is the first of a kind, SMART-1 has been developed in less than four years, and at about a fifth of the cost of a major science mission for ESA: only 110 million euros. That includes the launch, the operations and a dozen scientific experiments. This was achieved partly by using new management methods — such as working with smaller teams both within ESA and in the industry — and partly because of some of the new features inherent in SMART-1, such as the miniaturisation and novel design.

Giuseppe Racca, SMART-1 Project Manager, explains: "What has been our trick? First, a short development period in itself means less money. But also, with its small size — which was a requirement of the mission because we are testing miniaturised hardware — the spacecraft is able to 'share' a commercial Ariane flight with two other passengers. Besides, since we were not constrained by any existing design or heritage, we could be more innovative and elegant in our architecture. For example, the new SMART-1 electrical architecture has enabled us to simplify the system tests considerably."

SMART-1 could almost be a toy spacecraft — it weighs only 367 kilograms and fits into a cube just one metre across (the solar panel wings extend about 14 metres) — although one able to gather high-value scientific and technological data.

Another innovation lies in the industrial policy applied to this mission. SMART-1 is a good example of an ESA mission in which a comparatively small company such as the Swedish Space Corporation (SSC) has been selected as prime contractor. “The experience of SSC in highly successful projects at national level was a key factor in the decision, as was ESA's goal of fostering a balanced industrial landscape in Europe,” says Niels Jensen of ESA’s Directorate of Industrial Matters and Technology Programmes.

The magic of ion engines

Solar-electric propulsion, one of the main technologies to be tested by SMART-1, is a new technique that uses 'ion engines'. These work by expelling a continuous beam of charged particles --ions-- at the back of the engine, which produces a thrust in the opposite direction and therefore pushes the spacecraft forward. The energy to feed the engine comes from the solar panels, hence the name 'solar-electric propulsion'.

Engineers have been working on ion engines for decades, but only recently have obstacles such as the lack of power availability from a spacecraft’s solar panels been overcome. Recent missions have been using ion thrusters mainly for attitude control and orbit station keeping. In the recent case of ESA’s telecommunication satellite Artemis, the onboard availability of ion thrusters was actually what allowed the mission to be rescued. Having been left by the launcher on an unplanned orbit, Artemis was slowly - but safely - brought up to its final working orbit by the power of its ion engines, initially designed for orbit maintenance only.

Starting with SMART-1, the first European spacecraft to use an ion engine as its main propulsion system, the amazing advantages of this method can now be fully exploited. Ion engines are very efficient: they deliver about ten times as much impulse per kilogram of propellant used. This gives a substantial reduction in the mass of the fuel carried on the spacecraft, which in turn leaves more room — more weight — for scientific instrumentation. Also, ion engines allow scope for designing trajectories to travel very long distances in less time, thereby opening the door to deeper space exploration. Another advantage is that these engines make for very accurate spacecraft control, which is essential for missions that require highly precise target pointing.

Such qualities stem from the fact that ion engines generate a very gentle thrust. SMART-1 will be accelerated just 0.2 millimetres per second per second, with a push equivalent to the weight of a postcard. This is why solar-electric propulsion cannot be used for taking off from Earth, for example; it only works in the vacuum of space. For very distant destinations, this is not a problem. Compared to conventional chemical rockets, which burn for a few minutes, ion engines work for years, or for as long as the solar panels keep providing electricity. So the ion ‘tortoise’ will eventually overtake the chemical ‘hare’.

Long, energy-demanding interplanetary missions will benefit most from solar-electric primary propulsion. In such cases, spacecraft need an enormous amount of chemical fuel on board, leaving very little capacity for scientific instruments. Moreover, to make the most economical use of this fuel, they need to take maximum advantage of gravity-assist manoeuvres, making space journeys longer and more complex. With solar-electric propulsion, in contrast, much less fuel is needed on board, with the advantages of more room for instruments and the ability to avoid complex gravity-assist manoeuvres. But these advantages do not come into play on short distances, such as from the Earth to the Moon.

So why is SMART-1 testing its ion engine on a trip to the Moon? The answer is threefold. First, the Moon is a very interesting scientific target. Secondly, SMART-1 has the opportunity to share the cost of an Ariane-5 launch with other passengers heading for the geostationary transfer orbit (GTO), from which the Moon can be reached. Last but not least, the spiral orbit which SMART-1 has to take to reach the Moon from GTO is a long and complex trajectory, so that the ion engine will be fully tested in conditions representative of a deep-space mission.

The technology to be tested on SMART-1 is a strategic investment for ESA. In particular, development of the solar-electric propulsion technology was followed by ESA directly. The experience gained with SMART-1 will be useful to many aspects of space technology, providing thorough groundwork for future ESA programmes.

As ESA engineer Denis Estublier explains, "SMART-1 will provide answers to technological questions that affect the whole sector. It will demonstrate the use and the lifetime in space of electric thrusters; the ground control of a quasi-continuously thrusting satellite, the performance of the solar panels in the radiation belts; the interactions of the ion beam with the spacecraft surface and instruments."

Many kinds of spacecraft, including commercial telecommunication satellites, will benefit from such technology. Ion engines will find an immediate application in future ESA scientific missions to distant destinations that could not be reached otherwise, as conventional chemical-propulsion spacecraft could not carry the required payload mass. Other scientific missions will have to rely completely on the accurate spacecraft control provided by the very gentle thrust of the ion engines.

SMART-1’s journey starts on Saturday 27 September at 08.02 p.m. local time in Kourou (Sunday 28 September at 01:02 a.m. CEST) with a launch an Ariane 5 rocket from the European launch base in Kourou, French Guiana. The trip itself will be part of the adventure, with the engineers checking on the performance of the new technology. But for the scientifically curious the real thrill will begin in December 2004, when SMART-1 reaches the Moon. Then it will be the turn of the scientific instruments, which will help to solve such questions as the origin of the Moon, the existence of water on the Moon, and the possibility of building a permanent human base on the lunar surface.

SMART-1 was developed for ESA by the Swedish Space Corporation, as prime contractor, with contributions from almost 30 contractors from 11 European countries and the United States. The spacecraft carries 19 kilograms of science payload consisting of experiments led by Principal Investigators from Finland, Germany, Italy, Switzerland and the United Kingdom.