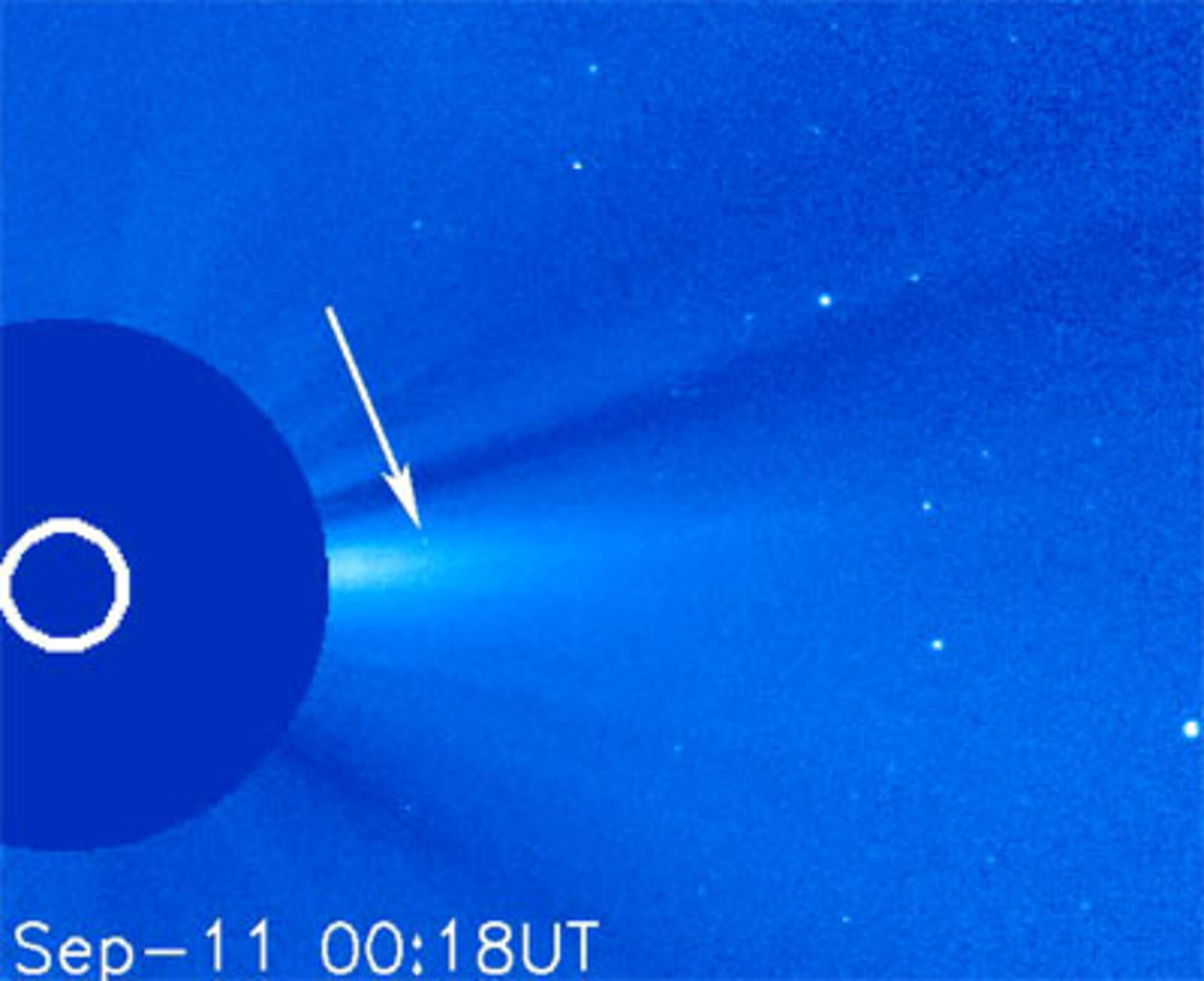 It is nothing new for the ESA/NASA Solar and Heliospheric Observatory (SOHO) to discover another comet – it has already found more than 1350. But the latest is a bit different - SOHO had spotted it twice before.

For the first time, SOHO’s Large Angle and Spectrometric Coronagraph Experiment (LASCO) has found a rare type of comet called a periodic comet (which flies by the Sun at regular intervals). While many SOHO comets are believed to be periodic, this is the first one that has been conclusively proven and officially declared as such.

Astronomers have seen thousands of comets but classified only around 190 as periodic. Many more are proposed to be periodic, but they only gain this classification officially if they are seen to follow their orbits around the Sun more than twice, and have orbital periods of less than two hundred years. The most famous periodic comet is Halley’s comet, returning every 76 years, with its last close pass to the Sun taking place in 1986.

SOHO’s new catch has a much smaller orbit, taking approximately four years to travel once around the Sun. It was first seen in September 1999, and then again in September 2003. In 2005, German PhD student Sebastian Hoenig realised that the two comets were so similar in orbit that they might actually be the same object.

To test his theory, he calculated a combined orbit for the comet, and consequently predicted that it would return on 11 September 2007. Sebastian's prediction proved to be extremely accurate – the comet reappeared in SOHO's LASCO camera right on schedule, and has now been given the official designation of P/2007 R5 (SOHO).

There is a puzzling aspect, however, as the comet does not look exactly like a comet. It has no visible tail or coma of dust and gas. Initially, some scientists wondered if it were actually an asteroid, a chunk of space-rock rather than a chunk of space-ice. However, P/2007 R5 (SOHO) did exhibit some cometary characteristics. As it passed to within 7.9 million kilometres of the Sun, around 5% of the distance from the Earth to the Sun, they observed it brighten by a factor of around a million. This is common behaviour for a comet.

So P/2007 R5 (SOHO) seems to behave like a comet, even though it doesn’t really look like one. “It is quite possibly an extinct comet nucleus of some kind,” says Karl Battams, who runs SOHO's comet discovery programme. Extinct comets are those that have expelled most of their volatile ice and have little left to form a tail or coma. They are theorised to be common objects amongst the celestial bodies orbiting close to the Sun.

The comet faded as quickly as it brightened, and soon became too faint for SOHO's instruments to see it. Estimates show that P/2007 R5 (SOHO) is probably only 100-200 metres in diameter. Given how small and faint this object is, and how close it still is to the Sun, it is an extremely difficult target for observers on Earth to pick out in the sky.

Now we know for certain that P/2007 R5 (SOHO) is there, astronomers will be watching closely for it during its next return in September 2011.

The credit for discovery and recovery of the object goes to Terry Lovejoy (Australia, 1999), Kazimieras Cernis (Lithuania, 2003) and Bo Zhou (China, 2007).

Hoenig’s work is detailed in ‘Identification of a new short-period comet near the Sun’ by S.F. Hoenig, published in Astronomy and Astrophysics in January 2006.

The comet’s properties were confirmed last week by Karl Battams.