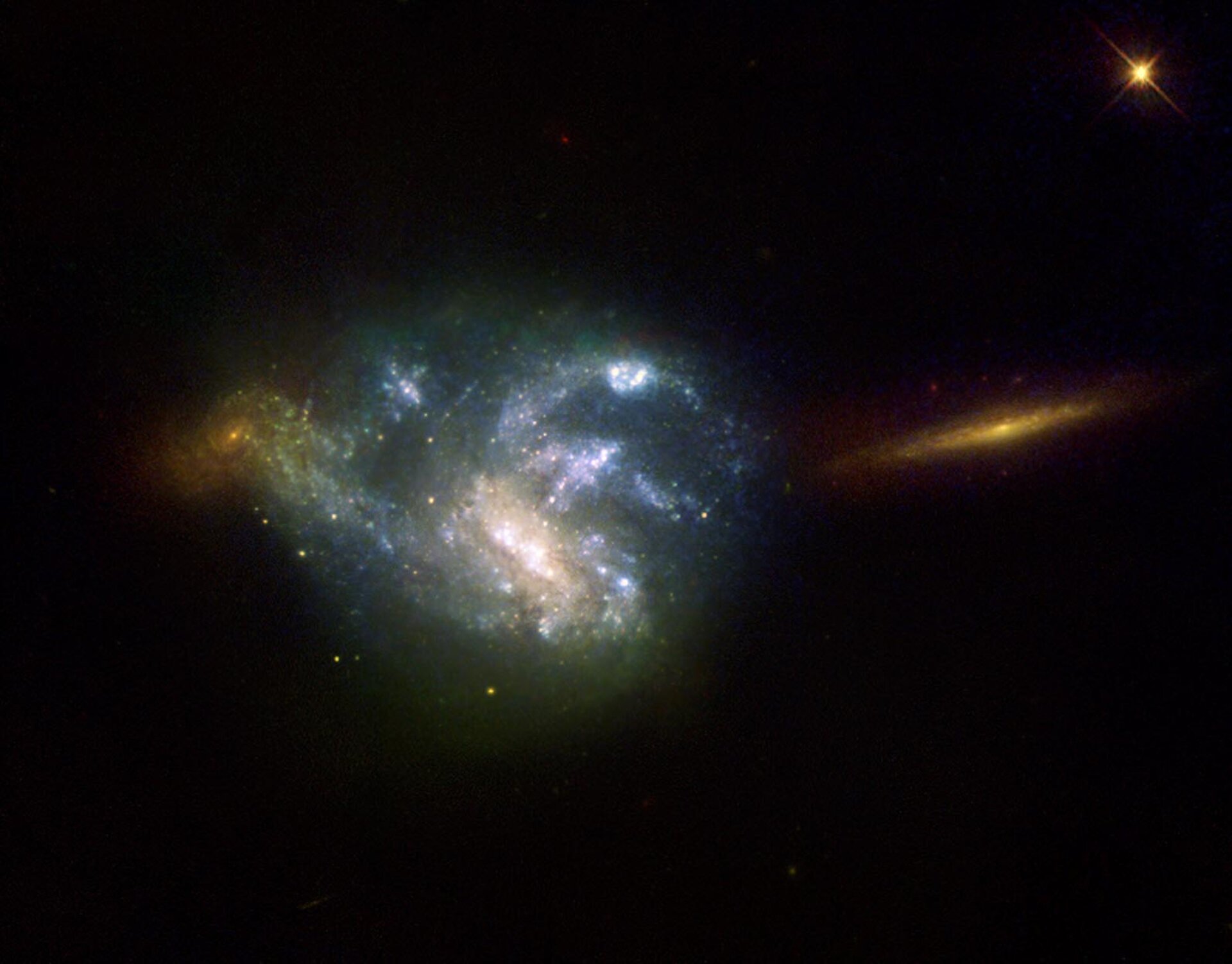 The disturbed spiral galaxy NGC 7673 is ablaze with the light from millions of new stars. Each of its infant giant blue star clusters shines 100 times as brightly in the ultraviolet as similar immense star clusters in our own Galaxy. Scientists studying this object have two pressing questions: "What has triggered this enormous burst of star formation and how will this galaxy evolve in the future?"

Telltale patches of blue light are signs of the formation of millions of new stars in the tangled spiral galaxy NGC 7673. Each of the bluish areas in this image consists of immense star clusters containing thousands of young stars. These clusters lie on the spiral arms of NGC 7673 and so emphasise its somewhat ragged look. This image, taken from Earth orbit by the ESA/NASA Hubble Space Telescope in 1996 and 1997, also shows two other galaxies seen in the background of the image, to the left and right of NGC 7673. These galaxies are further away and so appear redder, due to their higher redshift, an effect caused by the expansion of the Universe.

Although this image is another attractive example of 'space art' from Hubble, there is also a purpose behind the beauty.

Extracting the secrets of NGC 7673

According to Nicole Homeier from the European Southern Observatory in Munich, Germany and the University of Wisconsin-Madison, USA, "NGC 7673 is a nearby example of the type of vigorous star formation that we think may have taken place in the early Universe. Our most pressing questions are: What has triggered this enormous burst of star formation and how will the galaxy evolve in the future?"

There are two possible causes for this remarkable flurry of star formation: either a near miss or a collision between NGC 7673 and a nearby galaxy, or some unusual circumstances within the spiral galaxy itself - for example, there may have been an overabundance of gas in the galaxy's disc that became gravitationally unstable, forming huge gas clumps that then burst into stellar 'flame'.

For Homeier and her collaborators in America and Europe, the Hubble image offers new opportunities. "For many years we have only been able to see the star-forming regions as fuzzy clumps from ground-based telescopes. Now, with Hubble we can study how these clumps may have originated and how this 'starburst galaxy' relates to the younger star-forming galaxies we see in the early Universe", she says. "We hope to find the answer to our questions in the next few years."

NGC 7673 is located in the constellation of Pegasus at an approximate distance of 150 million light-years. This picture is composed of three images obtained with Hubble's Wide Field Planetary Camera 2 on 15 October 1996 and 11 October 1997. The three images were taken through a red filter (800 seconds), a green filter (1200 seconds) and an ultraviolet filter (2300 seconds) - shown in blue.