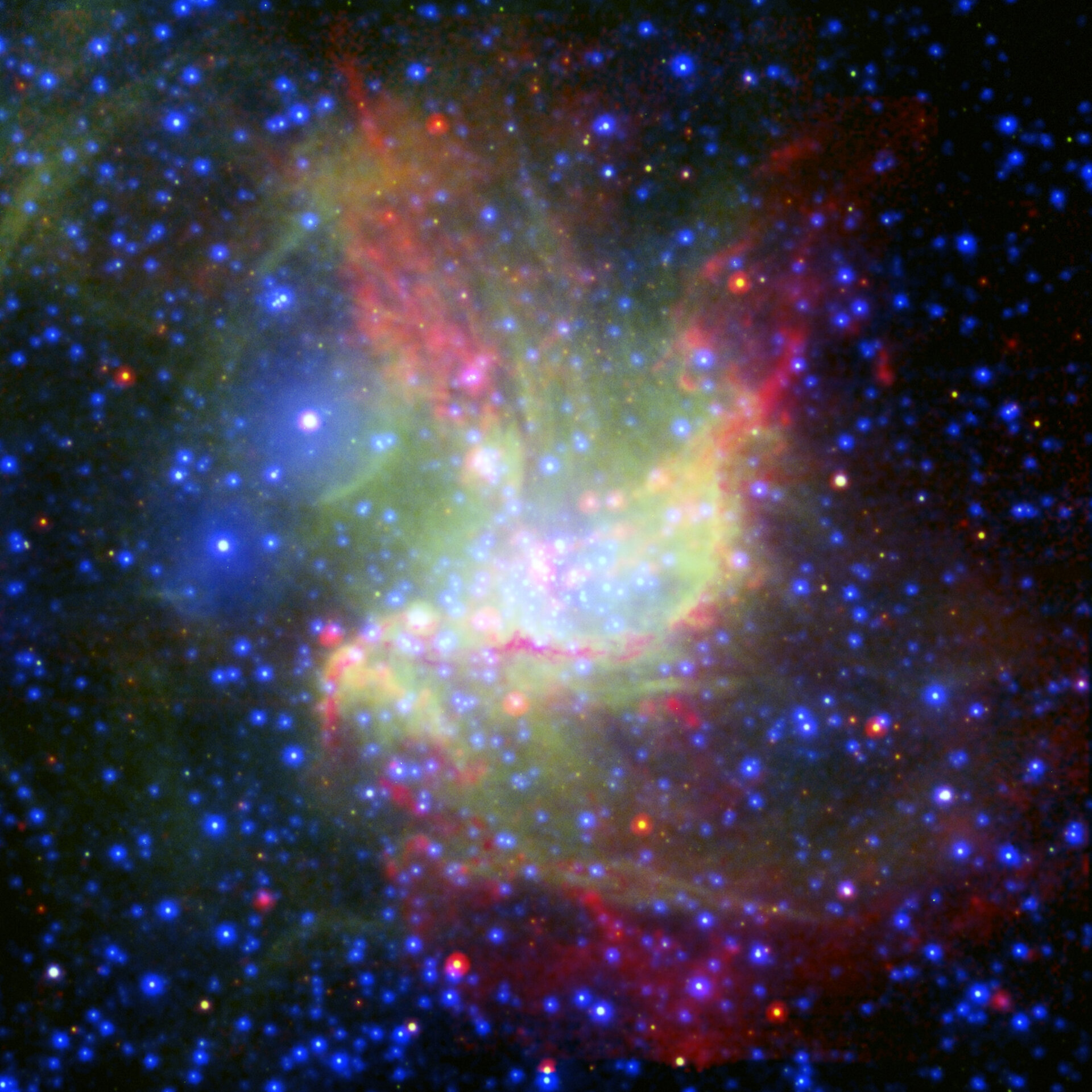 Different wavelengths of light swirl together like watercolours in a new, ethereal portrait of a bright, active star-forming region.

The colourful image offers a fresh look into the history of the star-studded region, called NGC 346, revealing new information on how stars in the Universe form.

NGC 346 is the brightest star-forming region in the Small Magellanic Cloud, a dwarf galaxy that orbits the Milky Way, at a distance of light-years.

"NGC 346 is an astronomical zoo," said Dimitrios Gouliermis from the Max Planck Institute for Astronomy in Germany, lead author of a paper describing the observations in an upcoming issue of the Astrophysical Journal. "When we combined data from various wavelengths, we were able to tease apart what's going on in different parts of the cloud."

Previously, astronomers knew that most of NGC 346's smaller stars were created at the same time as the massive stars located at the centre of the region, all out of one dense parent cloud. The intense radiation from the more massive stars ate away at the surrounding dusty cloud, causing gas to expand and compressing cold dust into new stars. This process is known as 'triggered star formation'. The red-orange filaments surrounding the centre of the image show where this process has occurred.

But the formation of a set of younger, small stars in the region, seen at the top of the image, could not be explained by this mechanism. Scientists were puzzled by what triggered the formation of this seemingly isolated group of stars.

By combining multi-wavelength data of NGC 346, Gouliermis and his team were able to trace back the trigger of the formation of these young stars to a very massive star that blasted apart in a supernova explosion about years ago. According to the team, this massive star spurred the stars into existence before it died, but it triggered a different type of star formation compared to that which occurred around the centre of the region. Fierce winds from the massive star, and not radiation, compressed the remaining dust in the parent cloud, forming new stars.

The finding demonstrates that both wind- and radiation-induced star formation are at play in the same cloud. According to Gouliermis, "The result shows us that star formation is a far more complicated process than we believed, comprising different competitive and collaborative mechanisms."

The new image also reveals a bubble, seen as a blue halo to the left, caused by the supernova explosion of the massive star. Analysis shows that this bubble is located within a large, expanding gaseous shell, possibly powered by the explosion and the winds of other bright stars in its vicinity.

The findings appear in the paper ‘NGC 346 in The Small Magellanic Cloud. IV. Triggered Star Formation in the HII Region N66’, which appears in an upcoming issue of the Astrophysical Journal, by D. Gouliermis et al.

The authors of this paper include Thomas Henning and Wolfgang Brandner of the Max Planck Institute for Astronomy, and You-Hua Chu and Robert Gruendl of the University of Illinois at Urbana-Champaign.