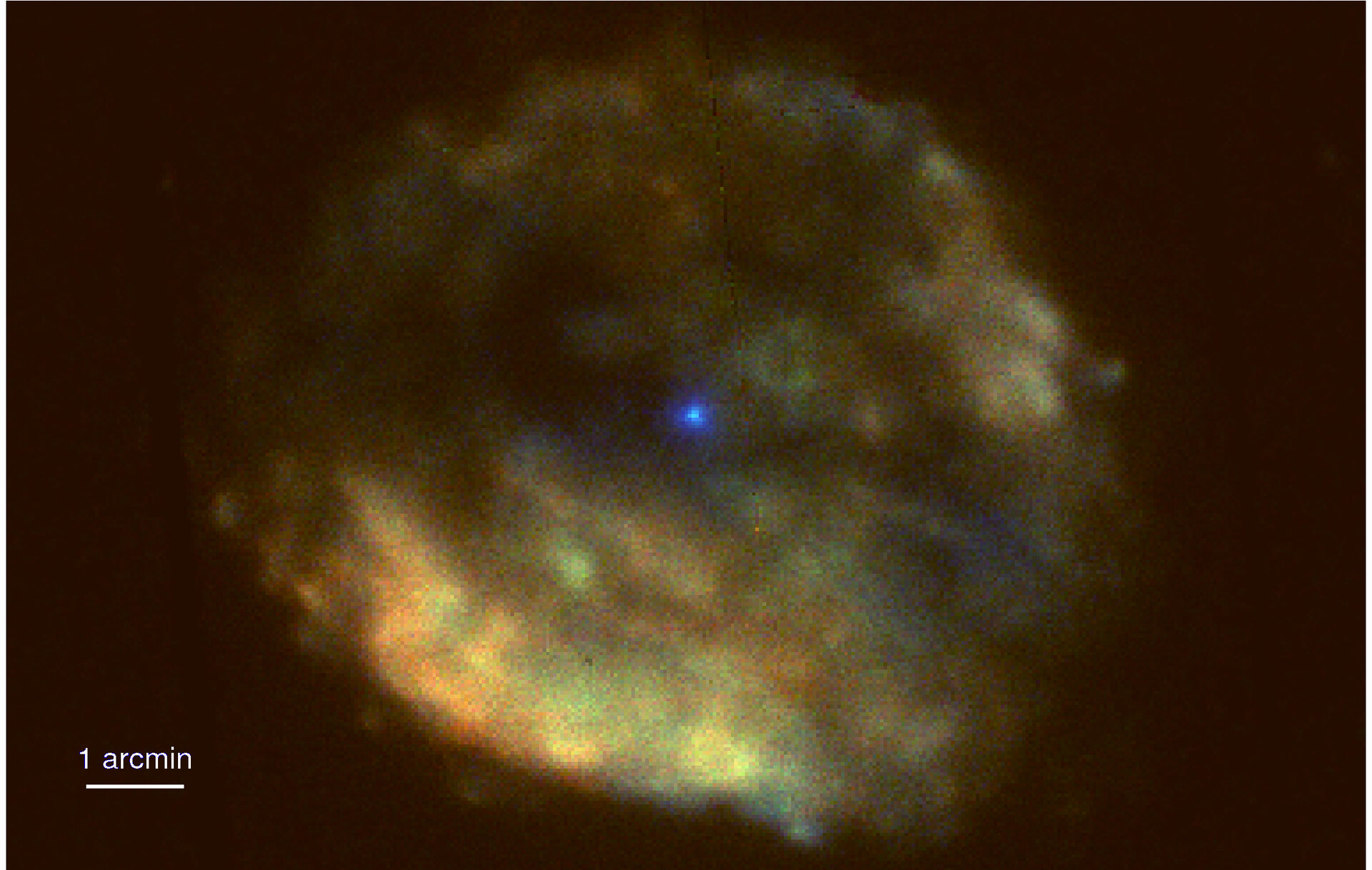 Thanks to data from ESA’s XMM-Newton satellite, a team of scientists taking a closer look at an object discovered over 25 years ago have found that it is like none other known in our galaxy.

The object is in the heart of supernova remnant RCW103, the gaseous remains of a star that exploded about 2 000 years ago. Taken at face value, RCW103 and its central source would appear to be a textbook example of what is left behind after a supernova explosion: a bubble of ejected material and a neutron star.

A deep, continuous 24.5-hour observation has revealed something far more complex and intriguing, however. The team, from the Istituto di Astrofisica Spaziale e Fisica Cosmica (IASF) of the Istituto Nazionale di Astrofisica (INAF) in Milan, Italy, has found that the emission from the central source varies with a cycle that repeats itself every 6.7 hours. This is an astonishingly long period, tens of thousands of times longer than expected for a young neutron star. Also, the object's spectral and temporal properties differ from an earlier XMM-Newton observation of this very source in 2001.

"The behaviour we see is especially puzzling in view of its young age, less than 2 000 years," said Andrea De Luca of IASF-INAF, the lead author. "It is reminiscent of a multimillion-year-old source. For years we have had a sense that the object is different, but we never knew how different until now."

The object is called 1E161348-5055, which the scientists have conveniently nicknamed 1E (where E stands for Einstein Observatory which discovered the source). It is embedded nearly perfectly in the centre of RCW 103, about 10 000 light years away in the constellation Norma. The near-perfect alignment of 1E in the centre of RCW 103 leaves astronomers rather confident that the two were born in the same catastrophic event.

When a star at least eight times more massive than our sun runs out of fuel to burn, it explodes in an event called a supernova. The stellar core implodes, forming a dense nugget called a neutron star or, if there's enough mass, a black hole. A neutron star contains about a sun's worth of mass crammed into a sphere only about 20 kilometres across.

Scientists have searched for years for 1E's periodicity in order to learn more about its properties, such as how fast it is spinning or whether it has a companion.

"Our clear detection of such a long period together with secular variability in X-ray emission makes for a very weird source," said Patrizia Caraveo of INAF, a co-author and leader of the Milano Group. "Such properties in a 2000-year-old compact object leave us with two probable scenarios, essentially a source that is accretion-powered or magnetic-field-powered."

1E could be an isolated magnetar, an exotic subclass of highly magnetized neutron stars. Here, the magnetic field lines act as brakes for the spinning star, liberating energy. About a dozen magnetars are known. But magnetars usually spin several times per minute. If 1E is spinning only once every 6.67 hours, as the period detection indicates, the magnetic field needed to slow the neutron star in just 2000 years would be too big to be plausible.

A standard magnetar magnetic field could do the trick, however, if a debris disk, formed by leftover material of the exploded star, is also helping to slow down the neutron star spin. This scenario has never been observed before and would point to a new type of neutron star evolution.

Alternatively, the long 6.67-hour period could be the orbital period of a binary system. Such a picture requires that a low-mass normal star managed to remain bound to the compact object generated by the supernova explosion 2000 year ago. Observations do allow for a companion of half the mass of our Sun, or even smaller.

A double accretion process could explain its behaviour: The compact object captures a fraction of the dwarf star's wind (wind accretion), but it is also able to pull out gas from the outer layers of its companion, which settles in an accretion disc (disc accretion). Such an unusual mechanism could be at work in an early phase of the life of a low-mass X-ray binary, dominated by the effects of the initial, expected, orbital eccentricity.

"RCW 103 is an enigma," said Giovanni Bignami, director of CESR,Toulouse, and co-author. "We simply don't have a conclusive answer to what is causing the long X-ray cycles. When we do figure this out, we're going to learn a lot more about supernovae, neutron stars and their evolution."

Had the star exploded in the northern sky, Cleopatra could have seen it and considered it to be an omen of her unhappy end, Caraveo said. Instead the explosion took place deep in the southern sky, and no one recorded it. Nevertheless, the source is a good omen for X-ray astronomers hoping to learn about stellar evolution.

The authors work builds upon observations by Gordon Garmire of Pennsylvania State University and Eric Gotthelf of Columbia University who have studied the source with Einstein, ROSAT, ASCA and Chandra and already found hints of a long period.