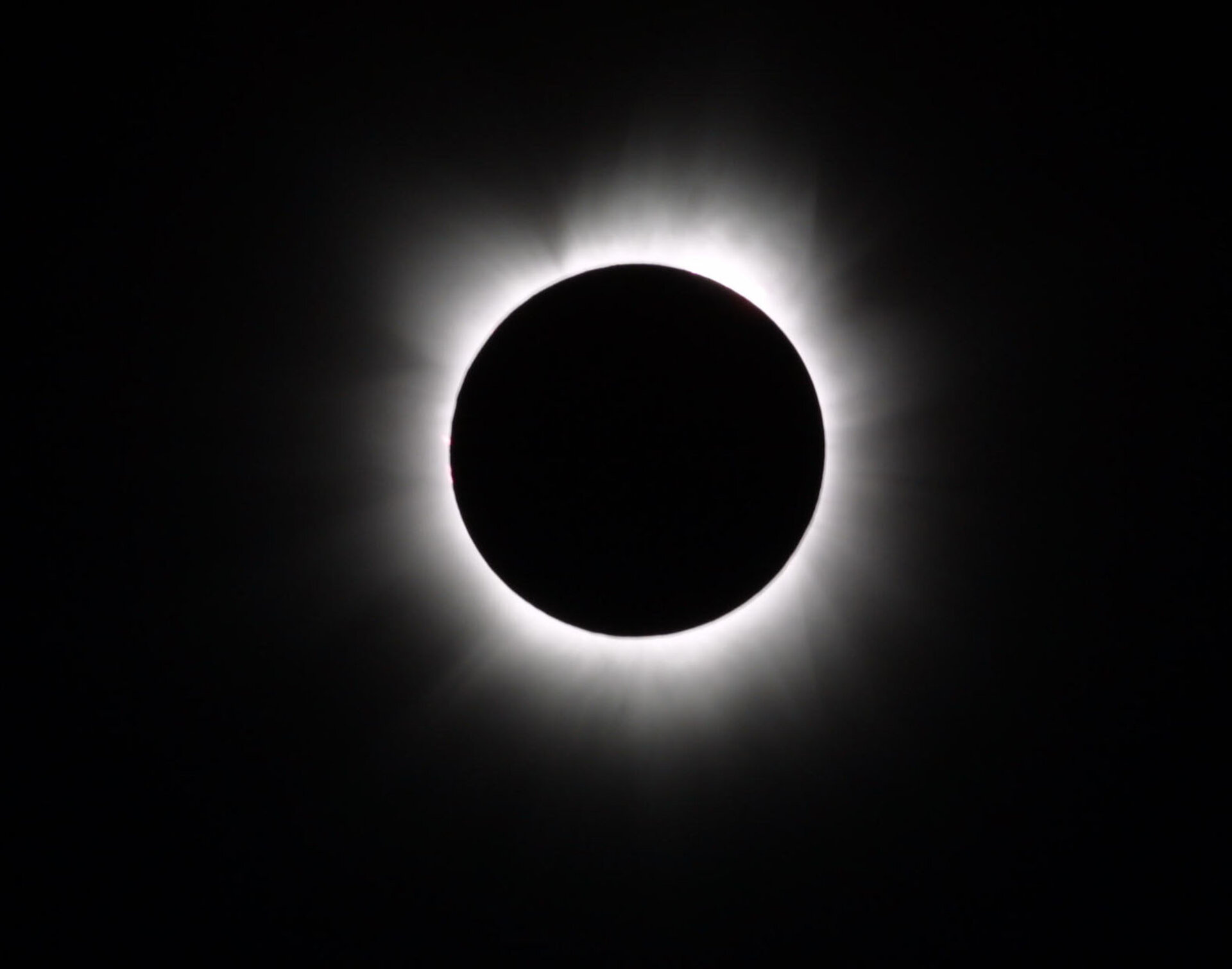 Did you know that the ancient Greeks were able to work out the diameter of the Earth using data from lunar eclipses?

The study of Earth's shadow projected on the Moon allows us to deduce that Earth is spherical. The ancient Greeks worked this out. Using lunar eclipse timing, as far back as the third century BC, Aristarchus from Samos estimated the lunar diameter.

In the 17th century, in order to improve longitude determination, absolute cartography made use of lunar eclipse phenomena, which were observable simultaneously from different points.

Today, during lunar eclipses, laser-ranging measurements can be made with great accuracy using reflectors placed on the Moon during the Apollo and Lunokhod missions. This has allowed more precise measurement of lunar acceleration and the slowing down in Earth's rotation.

Analysis of the refracted light of Earth's atmosphere during lunar eclipses has also made it possible to show that atmospheric ozone is confined to a layer between 50 and 80 kilometres above Earth's surface.

The ancient Greeks and Romans used dated references to eclipses to improve the calendar. They also noted phenomena related to eclipses. The corona seen during eclipses was only identified as a solar phenomenon in the middle of the 19th century.

Until then it was thought that the corona might come from terrestrial smoke, or that it indicated a lunar atmosphere. Kepler attributed it to solar light refracted by the atmosphere of the Moon. Even Halley (who predicted with success the path of the 1715 eclipse) and Arago interpreted the corona to be lunar in origin.

It was Cassini who established a link with the solar zodiacal light in 1683. The British amateur astronomer Francis Baily observed from the 1836 annular eclipse the irregularities of the lunar limb.

The first successful total eclipse photograph was taken on July 1851 by Berkowski from Königsberg. At the 1860 eclipse, photographs obtained by W. De La Rue and A. Secchi from two sites 500 km apart showed that prominences could not belong to the Moon, but were in fact of solar origin.

From 1842, the use of spectroscopes allowed the recognition of helium emission as well as a new, unknown emission line measured by Janssen at the 1868 eclipse from India. This was shown later by Ramsey (in 1900) to come from an element then unknown on Earth and therefore given the name 'helium' - now measured as the second most abundant element in the Universe.

Coronal eclipse spectra taken in 1869 also showed mysterious green and yellow spectral lines first attributed to another unknown element given the name 'coronium'. It was only much later, after the development of quantum mechanics and the measurement of spark discharge spectra by Bowen Edlen (1939), that the physicist Grotrian was able to solve the mystery of the coronium.

This can only occur at temperatures exceeding a million degrees. This discovery has led to another puzzle still unsolved today, but to which SOHO has unveiled fundamental clues: what heats the corona?

Another famous eclipse in 1919 allowed Arthur Eddington to confirm Einstein's prediction of general relativity space-time distortion in a gravity field.

An earlier German expedition to conduct this test in August 1914 failed when the team was taken as prisoners in Russia before being able to perform the key experiment. In 1919, Eddington selected two sites of observation from Brazil and Principe Island. The eclipse pictures showed an offset in the positions of stars due to solar gravitational bending of light that confirmed Einstein's theory exactly.

What can be measured during solar eclipses?

Eclipses made it possible to determine with precision the shape of the Moon. Their study improved the prediction of ephemerides. Even today, a total solar eclipse still allows astrophysicists to make valuable scientific measurements, particularly when co-ordinated with measurements from observatories in space.

Solar eclipses enable scientists to measure accurately the diameter of the Sun and to search for variations in that diameter over long time scales. Geophysicists measure eclipse phenomena induced in the high terrestrial atmosphere.

Total solar eclipses allow the observation of structures of the solar corona that cannot usually be studied due to the higher normal luminosity of skylight during the day.

The structures in the corona are similar to patterns seen around a magnet. In fact sunspots were shown to be solar surface magnetic structures, which have their counterpart in the corona. The study of the solar corona gives us much information about the Sun's surface and its global variations. The morphology of the corona is changing due to the reorganisation of the surface magnetic field during the solar cycle, which can be seen in eclipse pictures taken at different epochs. The re-analysis of historical eclipse reports and documents could help to understand long term solar magnetic variations.

One can follow these magnetically confined structures deep into the interplanetary medium. Eclipses make it possible to diagnose the physical conditions of temperature (at more than 1 million degrees), densities and dynamics, both in the corona and at the base of the sources of the solar wind. The dynamic instabilities, the solar wind and environment pervade the whole solar system and interact with Earth's magnetosphere.

Until the invention of the coronagraph in 1930, the rare glimpses from solar eclipses were the only opportunities to observe and study the solar corona.

French astrophysicist Bernard Lyot developed the coronagraph instrument which made it possible for the first time to occult the solar disk in order to study the inner corona (creating an artificial eclipse). This is still limited by the stray-light emitted by the daylight atmosphere and only works from clean and high altitude sites such as the Pic du Midi, Sacramento Peak and Hawaii observatories.

Used with additional filtering techniques to isolate specific emission this has given interesting results. Lyot made a spectacular movie using the Pic du Midi instrument showing giant prominences, arches and ejections of coronal mass. Unfortunately he died soon after a total solar eclipse expedition in Khartoum in 1952.

The solar corona from space

A revolution in the study of the corona came with the space age. In early sounding rocket experiments extreme-ultraviolet (EUV) and X-ray telescopes gave a view of the Sun very different from that previously seen in visible light.

X-ray radiation arises from high-temperature coronal plasmas, and with these telescopes the corona can be mapped over the whole solar disk, and not only above the limb as in the eclipses. The X-ray and EUV instruments on the Skylab platform provided motion pictures of the solar corona, with the discovery of coronal holes of low X-ray emission, and changes in strongly emitting active magnetic regions.

The Yohkoh Japanese X-ray satellite, launched in 1991, has obtained millions of X-ray images of the dynamic solar corona. The ultimate observations of the solar corona are now being obtained with SOHO, the Solar Heliospheric Observatory.

This includes data obtained with the Extreme UV Imaging Telescope (EIT), spectro-imagers (CDS, SUMER), a UV coronagraph (UVCS) measuring intensities and flows in the corona, and a three-channel visible coronagraph in the visible (LASCO) covering an impressive range of distances from 0.2 to 30 solar radii above the limb.

In addition, experiments map the surface magnetic field (MDI) and in-situ particle detectors measure the solar wind and instabilities a million kilometres before they reach Earth. SOHO now gives us a continuous view of the solar corona.

In this era of orbiting solar observatories, is there still a scientific benefit in making eclipse observations from Earth?

The biggest benefit comes from co-ordinating modern ground-based eclipse observations with space measurements. There are still new discoveries to be made from eclipses, by using the latest methods of investigation (very accurate timing, fast rate of measurements, wavelengths not covered from space such as infrared or visible ranges, new experimental techniques).

The interpretation of eclipse data together with space data gives us new insights into earlier eclipse observations, and also allows the study of long-term historical variability of the solar corona, and of the solar magnetic cycle.

Since the launch of SOHO in 1995, co-ordinated campaigns have been conducted during the total solar eclipse of 26 February 1998, and the 11 August 1999 eclipse. SOHO measurements are analysed, together with ground based eclipse results, providing important insights into the nature of our Sun.