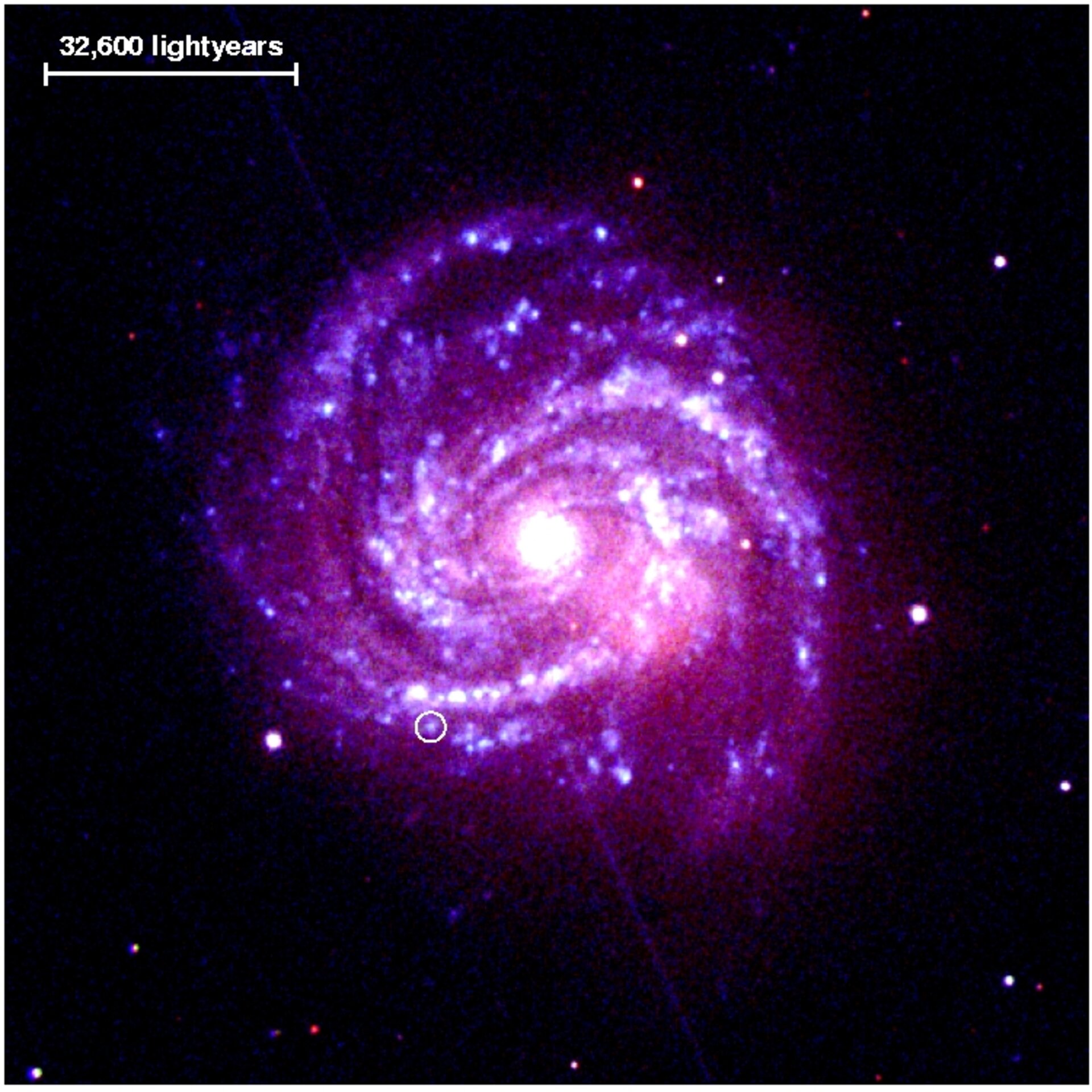 Scientists have found that a star that exploded in 1979 is as bright today in X-ray light as it was when it was discovered years ago, a surprise finding because such objects usually fade significantly after only a few months.

Using ESA’s XMM-Newton space observatory, a team of astronomers has discovered that this supernova, called SN 1979C, shows no sign of fading. The scientists can document a unique history of the star, both before and after the explosion, by studying rings of light left over from the blast, similar to counting rings in a tree trunk.

“This 25-year-old candle in the night has allowed us to study aspects of a star explosion never before seen in such detail,” said Dr Stefan Immler, leader of the team, from NASA’s Goddard Space Flight Center, USA. “All the important information that usually fades away in a couple of months is still there.”

Among the many unique finds is the history of the star’s stellar wind dating back 16 000 years before the explosion. Such a history is not even known about our Sun. Also, the scientists could measure the density of the material around the star, another first. The lingering mystery, though, is how this star could fade away in visible light yet remain so radiant in X-rays.

Stars explode when they run out of fuel to burn. Stars more than 10 times the mass of our Sun will explode in an event called a ‘core-collapse supernova’.

Without fuel and thus energy to support their gravity, such stars first implode. The core reaches a critical density, and much of the collapsing matter gets bounced back out violently into space by powerful shockwaves.

Supernovae can outshine an entire galaxy and are often easily seen in neighbouring galaxies with simple amateur telescopes. Supernovae are typically half as bright after about ten days and fade steadily after that, regardless of the wavelength.

SN 1979C has in fact faded in optical light by a factor of 250 becoming barely visible with a good amateur telescope. In X-rays, however, this supernova is still the brightest object in its host galaxy, M100, in the constellation ‘Coma Berenices’.

In identifying the history of the star that created SN 1979C, the team found that this star, about 18 times more massive than our Sun, produced fierce stellar winds. That material was flung into space for millions of years, creating concentric rings around the star.

The X-rays - produced after the explosion when the supernova shock caught up with the stellar wind and heated it to a temperature of several million degrees - illuminated 16 000 years’ worth of stellar activity.

“We can use the X-ray light from SN 1979C as a ‘time machine’ to study the life of a dead star long before it exploded,” said Immler.

The detailed analysis was only possible because SN 1979C has not yet faded away. Scientists have 25 years’ worth of data in a variety of wavelengths, from radio waves through to optical/ultraviolet and X-rays. They speculate that the abundance of stellar wind has provided ample material to keep SN 1979C glowing so brightly.

The team also captured a rare glimpse of the ultraviolet radiation from the supernova using XMM-Newton. The ultraviolet image independently confirms what the X-ray analysis found: that the circumstellar material – covering a region 25 times larger than our Solar System - has a relatively high density of 10 000 atoms per cubic centimetre, or about 1000 times denser than the wind from our Sun. The ultraviolet image also shows galaxy M100 in detail never seen before.

“XMM-Newton is known among scientists as a superior X-ray observatory, but the study of SN 1979 demonstrates the importance of the satellite's simultaneously observing ultraviolet and optical telescope,” said Dr Norbert Schartel, XMM-Newton Project Scientist at ESA's European Space Astronomy Centre (ESAC) in Spain.