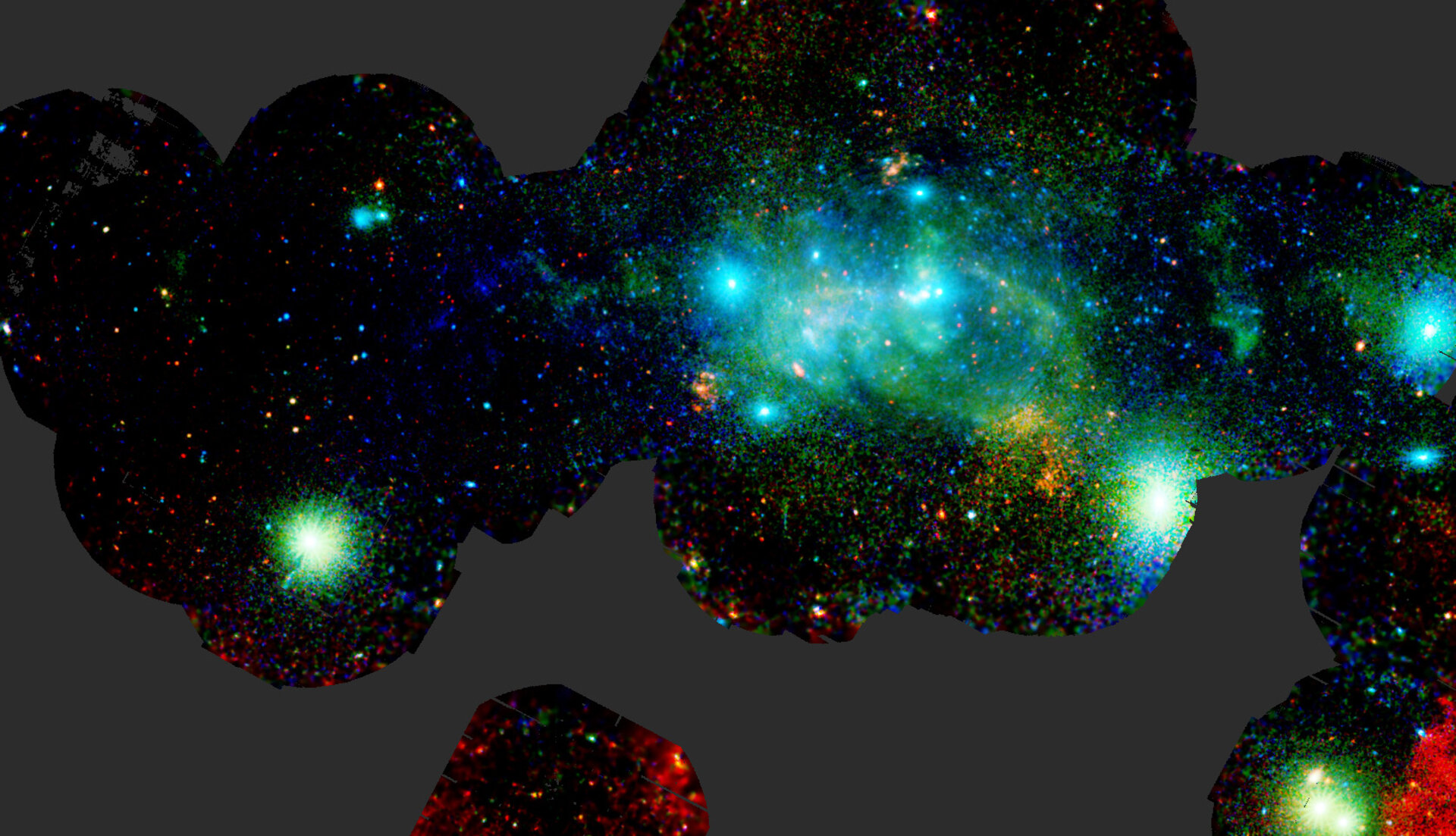 This new image of powerful remnants of dead stars and their mighty action on the surrounding gas from ESA's XMM-Newton X-ray observatory reveals some of the most intense processes taking place at the centre of our galaxy, the Milky Way.

The bright, point-like sources that stand out across the image trace binary stellar systems in which one of the stars has reached the end of its life, evolving into a compact and dense object – a neutron star or black hole. Because of their high densities, these compact remnants devour mass from their companion star, heating the material up and causing it to shine brightly in X-rays.

The central region of our galaxy also contains young stars and stellar clusters, and some of these are visible as white or red sources sprinkled throughout the image, which spans about one thousand light-years.

Most of the action is occurring at the centre, where diffuse clouds of gas are being carved by powerful winds blown by young stars, as well as by supernovas, the explosive demise of massive stars.

The supermassive black hole sitting at the centre of the Galaxy is also responsible for some of this action. Known as Sagittarius A*, this black hole has a mass a few million times that of our Sun, and it is located within the bright, fuzzy source to the right of the image centre.

While black holes themselves do not emit light, their immense gravitational pull draws in the surrounding matter that, in the process, emits light at many wavelengths, most notably X-rays. In addition, two lobes of hot gas can be seen extending above and below the black hole.

Astronomers believe that these lobes are caused either directly by the black hole, which swallows part of the material that flows onto it but spews out most of it, or by the cumulative effect of the numerous stellar winds and supernova explosions that occur in such a dense environment.

This image, showing us an unprecedented view of the Milky Way's energetic core, was put together in a new study by compiling all observations of this region that were performed with XMM-Newton, adding up to about one and a half months of monitoring in total.

The large, elliptical structure to the lower right of Sagittarius A* is a super-bubble of hot gas, likely puffed up by the remnants of several supernovas at its centre. While this structure was already known to astronomers, this study confirms for the first time that it consists of a single, gigantic bubble rather than the superposition of several, individual supernova remnants along the line of sight.

Another huge pocket of hot gas, designated the 'Arc Bubble' due to its crescent-like shape, can be seen close to the image centre, to the lower left of the supermassive black hole. It is being inflated by the forceful winds of stars in a nearby stellar cluster, as well as by supernovae; the remnant of one of these explosions, a candidate pulsar wind nebula, was detected at the core of the bubble.

The rich data set compiled in this study contains observations that span the full range of X-ray energies covered by XMM-Newton; these include some energies corresponding to the light emitted by heavy elements such as silicon, sulphur and argon, which are produced primarily in supernova explosions. By combining these additional information present in the data, the astronomers obtained another, complementary view of the Galactic Centre, which reveals beautifully the lobes and bubbles described earlier on.

In addition, this alternative view also displays the emission, albeit very faint, from warm plasma in the upper and lower parts of the image. This warm plasma might be the collective macroscopic effect of outflows generated by star formation throughout this entire central zone.

Another of the possible explanations for such emission links it to the turbulent past of the now not-so-active supermassive black hole. Astronomers believe that, earlier on in the history of our galaxy, Sagittarius A* was accreting and ejecting mass at a much higher rate, like the black holes found at the centre of many galaxies, and these diffuse clouds of warm plasma could be a legacy of its ancient activity.

Related scientific papers:
The XMM-Newton view of the central degrees of the Milky Way, by G. Ponti et al.