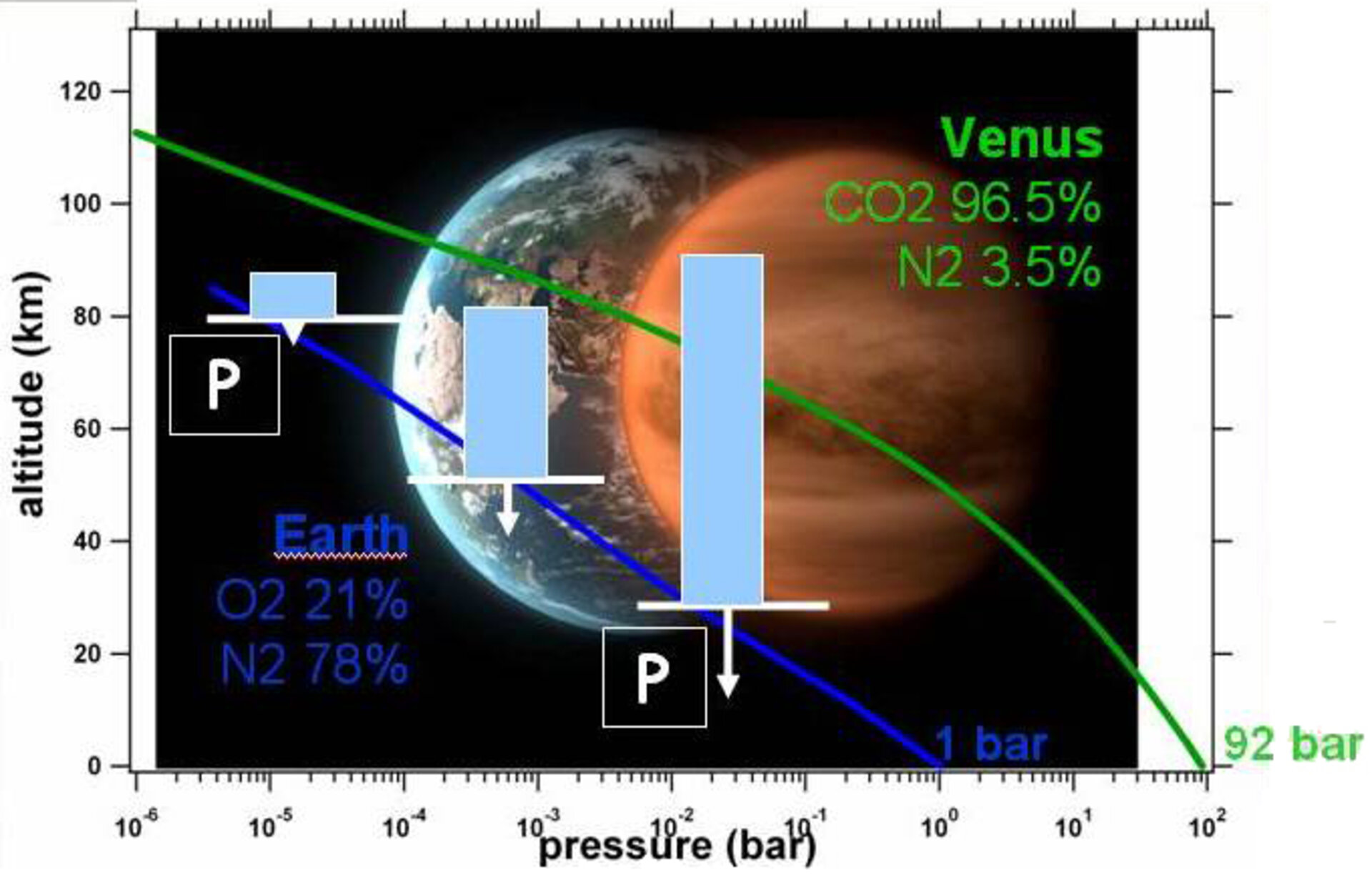 Venus has a rich and complicated atmosphere - the densest of all the rocky planets – which is the key to understanding the planet itself. Venus Express, designed to perform an extensive investigation of the atmosphere, has revealed surprising details about its temperature structure.

Venus has thick clouds of sulphuric acid that extend between altitudes of 40 to 60 km. Above this, the region between 60 to 100 km is known as the mesosphere, and is a transition region between the lower winds, which whip the cloud tops around the planet in four days, and the circulation of the upper atmosphere, which is driven by the influx of solar radiation. Having absorbed solar radiation, the hot upper atmosphere rises still further, circulating to the night side of the planet where it cools and sinks back to the level of the cloud tops.

It sits between the altitudes of 90–120 km, a region that is generally so cold at night that scientists often refer to it as Venus’s cryosphere. The new measurements show that the temperature excess ranges from 30 to 70°C and peaks at an altitude of 100 km.

This region of Venus’s atmosphere contains light hazes of various aerosol particles, composed chiefly of sulphuric acid and water. These are highly variable and can often be seen as bright regions of the planet. Nevertheless, it is a poorly studied region of the planet because earlier spaceprobes that descended through the atmosphere only began their measurements at or below 60 km.

Venus Express made the measurements using its SPICAV/SOIR instrument (SPectroscopy for the Investigation of the Characteristics of the Atmosphere of Venus/Solar Occultation in the InfraRed). This watches stars, or even the Sun, as they set behind Venus, a technique known as an occultation.

The instrument measures the amount of light absorbed by the atmosphere at different wavelengths, and by doing so it identifies both the chemicals and the temperature in the different layers of the atmosphere.

The ‘temperature inversion’, as the layer of warm air is called, was detected in several stellar occultations performed on the night-time side of the planet. The only thing that can heat the atmosphere here is when pockets of gas sink back down into the denser atmosphere. The increased air pressure squeezes the pockets, raising the temperature of the gas inside (similar to what happens when you activate a bicycle pump).

Another instrument on Venus Express has been probing the temperatures in the atmosphere, from the rarefied reaches of Venus’s ionosphere at heights of 500-100 km, down to around 50 km above the surface. This is the Venus Express Radio Science (VeRa) experiment, that works a bit like SPICAV/SOIR, except that in this case the spacecraft is the ‘star’ that astronomers on Earth watch set behind Venus.

VeRa emits ultra-stable radio waves that travel through Venus’s atmosphere on their way to Earth and that can be detected by radio telescopes on Earth. The time delay in these radio waves can be translated into information about the atmosphere of Venus.

So far, measurements have been obtained from only a limited number of latitudes and local solar times. Should the Venus Express mission be extended, the coverage will be improved and a global characterisation of the temperature in three dimensions will be possible.

The results appear in the 29 November issue of the scientific journal Nature, in the papers: 'A warm layer in Venus' cryosphere and high-altitude measurements of HF, HCL, H2O and HDO, by J-L.Bertaux, A-C. Vandaele et al., and 'The structure of Venus' middle atmosphere and middle ionosphere', by M.Patzold et al.