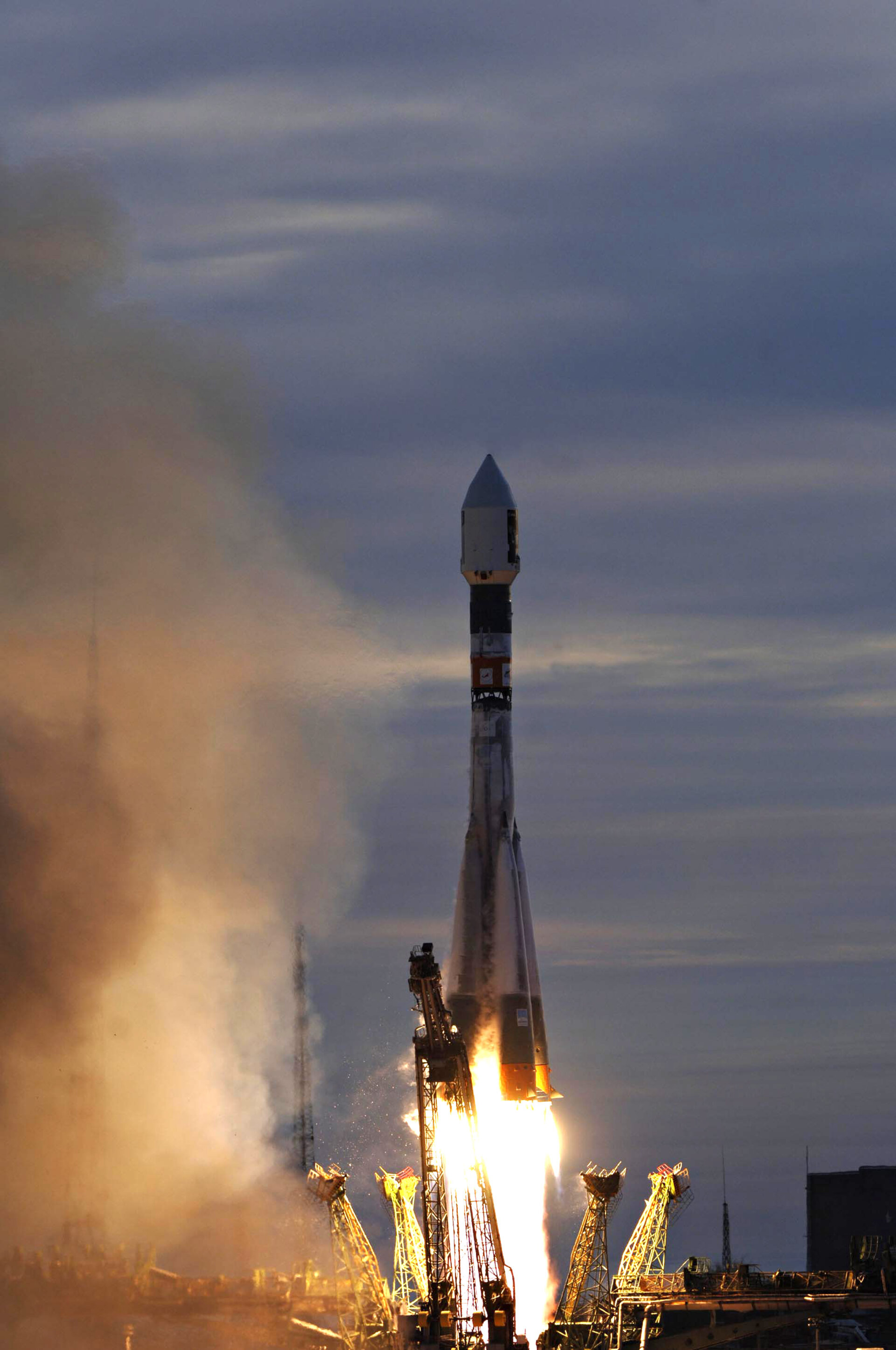 ESA PR 50-2005. The European spacecraft Venus Express has been successfully placed into a trajectory that will take it on its journey from Earth towards its destination of the planet Venus, which it will reach next April.

A virtual twin sister of the Mars Express spacecraft which has been orbiting the Red Planet since December 2003, Venus Express is the second planet-bound probe to be launched by the European Space Agency.

Venus Express will eventually manoeuvre itself into orbit around Venus in order to perform a detailed study of the structure, chemistry and dynamics of the planet's atmosphere, which is characterised by extremely high temperatures, very high atmospheric pressure, a huge 'greenhouse effect' and as-yet inexplicable 'super-rotation' which means that it speeds around the planet in just four days.

The European spacecraft will also be the first orbiter to probe the planet's surface while exploiting the 'visibility windows' recently discovered in the infrared waveband.

The 1240 kg mass spacecraft was developed for ESA by a European industrial team led by EADS Astrium with 25 main contractors spread across 14 countries. It lifted off on board a Soyuz- Fregat rocket, the launch service being provided by Starsem.

The lift-off from the Baikonur Cosmodrome in Kazahkstan this morning took place at 09:33 local time (04:33 Central European Time).

Initial Fregat upper-stage ignition took place nine minutes into the flight, manoeuvring the spacecraft into a low-earth parking orbit. A second firing, one hour and 22 minutes later, boosted the spacecraft to pursue its interplanetary trajectory.

Contact with Venus Express was established by ESA's European Space Operations Centre (ESOC) at Darmstadt, Germany approximately two hours after lift-off. The spacecraft has correctly oriented itself in relation to the sun and has deployed its solar arrays.

All on-board systems are operating perfectly and the orbiter is communicating with the Earth via its low-gain antenna. In three days' time, it will establish communications using its high-gain antenna.

Full speed ahead for Venus

Venus Express is currently distancing itself from Earth at full speed, heading on its five-month, 350 million kilometre journey inside our Solar System. After check-outs to ensure that its on-board equipment and instrument payload are in proper working order, the spacecraft will be 'mothballed', with contact with Earth being reduced to once daily. If needed, trajectory correction manoeuvres can go ahead at the half-way stage in January.

When making its closest approach, Venus Express will face far tougher conditions than those encountered by Mars Express on nearing the Red Planet. For while Venus's size is indeed similar to that of Earth, its mass is 7.6 times that of Mars, with gravitational attraction to match.

To resist this greater gravitational pull, the spacecraft will have to ignite its main engine for 53 minutes in order to achieve 1.3 km/second deceleration and place itself into a highly elliptical orbit around the planet. Most of its 570 kg of propellant will be used for this manoeuvre.

A second engine firing will be necessary in order to reach final operational orbit: a polar elliptical orbit with 12-hour crossings. This will enable the probe to make approaches to within 250 km of the planet's surface and withdraw to distances of up to 66 000 km, so as to carry out close-up observations and also get an overall perspective.

"The launch of Venus Express is a further illustration of Europe's determination to study the various bodies in our solar system," stressed Professor David Southwood, the Director of ESA's science programmes.

"We started in 2003 with the launch of Mars Express to the Red Planet and SMART-1 to the Moon and both these missions have amply exceeded our expectations. Venus Express marks a further step forward, with a view to eventually rounding off our initial overview of our immediate planetary neighbours with the BepiColombo mission to Mercury to be launched in 2013."

"With Venus Express, we fully intend to demonstrate yet again that studying the planets is of vital importance for life here on Earth," said Jean Jacques Dordain, ESA Director General.

"To understand climate change on Earth and all the contributing factors, we cannot make do with solely observing our own planet. We need to decipher the mechanics of the planetary atmosphere in general terms. With Mars Express, we are studying the Martian atmosphere. With Huygens, we have explored that of Saturn's satellite Titan.

"And now with Venus Express, we are going to add a further specimen to our collection. Originally, Venus and the Earth must have been very similar planets. So we really do need to understand why and how they eventually diverged to the point that one became a cradle for life while the other developed into a hostile environment."

The Venus Express mission is planned to last at least two Venusian days (486 Earth days) and may be extended, depending on the spacecraft's operational state of health.

Venus Express largely re-uses the architecture developed for Mars Express. This has reduced manufacturing cycles and halved the mission cost, while still targeting the same scientific goals. Finally approved in late 2002, Venus Express was thereby developed fast, indeed in record time, to be ready for its 2005 launch window.

However, Venusian environmental conditions are very different to those encountered around Mars. Solar flux is four times higher and it has been necessary to adapt the spacecraft design to this hotter environment, notably by entirely redesigning the thermal insulation.

Whereas Mars Express sought to retain heat to enable its electronics to function properly, Venus Express will in contrast be aiming for maximum heat dissipation in order to stay cool.

The solar arrays on Venus Express have been completely redesigned. They are shorter and are interspersed with aluminium strips to help reject some solar flux to protect the spacecraft from temperatures topping 250ºC.

It has even been necessary to protect the rear of the solar arrays – which normally remain in shadow – in order to counter heat from solar radiation reflected by the planet's atmosphere.

An atmosphere of mystery

Following on from the twenty or so American and Soviet missions to the planet carried out since 1962, Venus Express will endeavour to answer many of the questions raised by previous missions but so far left unanswered.

It will focus on the characteristics of the atmosphere, its circulation, structure and composition in relation to altitude, and its interactions with the planet's surface and with the solar wind at altitude.

To perform these studies, it has seven instruments on board: three are flight-spare units of instruments already flown on Mars Express, two are from comet-chaser Rosetta and two were designed specifically for this mission.

The PFS high-resolution spectrometer will measure atmospheric temperature and composition at varying altitudes. It will also measure surface temperature and search for signs of current volcanic activity.

The SPICAV/SOIR infrared and ultraviolet spectrometer and the VeRa instrument will also probe the atmosphere, observing stellar occultation and detecting radio signals; the former will in particular seek to detect molecules of water, oxygen and sulphuric compounds thought to be present in the atmosphere.

The VIRTIS spectrometer will map the various layers of the atmosphere and conduct multi-wavelength cloud observation in order to provide images of atmospheric dynamics.

Assisted by a magnetometer, the ASPERA 4 instrument will analyse interaction between the upper atmosphere and the solar wind in the absence of magnetospheric protection such as that surrounding Earth (for Venus had no magnetic field). It will analyse the plasma generated by such interaction, while the magnetometer will study the magnetic field generated by the plasma.

The VMC camera will monitor the planet in four wavelengths, notably exploiting one of the 'infrared windows' revealed in 1990 by the Galileo spacecraft (when flying by Venus en route for Jupiter), making it possible to penetrate cloud cover through to the surface. The camera will also be used to monitor atmospheric dynamics, notably to observe the double atmospheric vortex at the poles, the origin of which still remains a mystery.