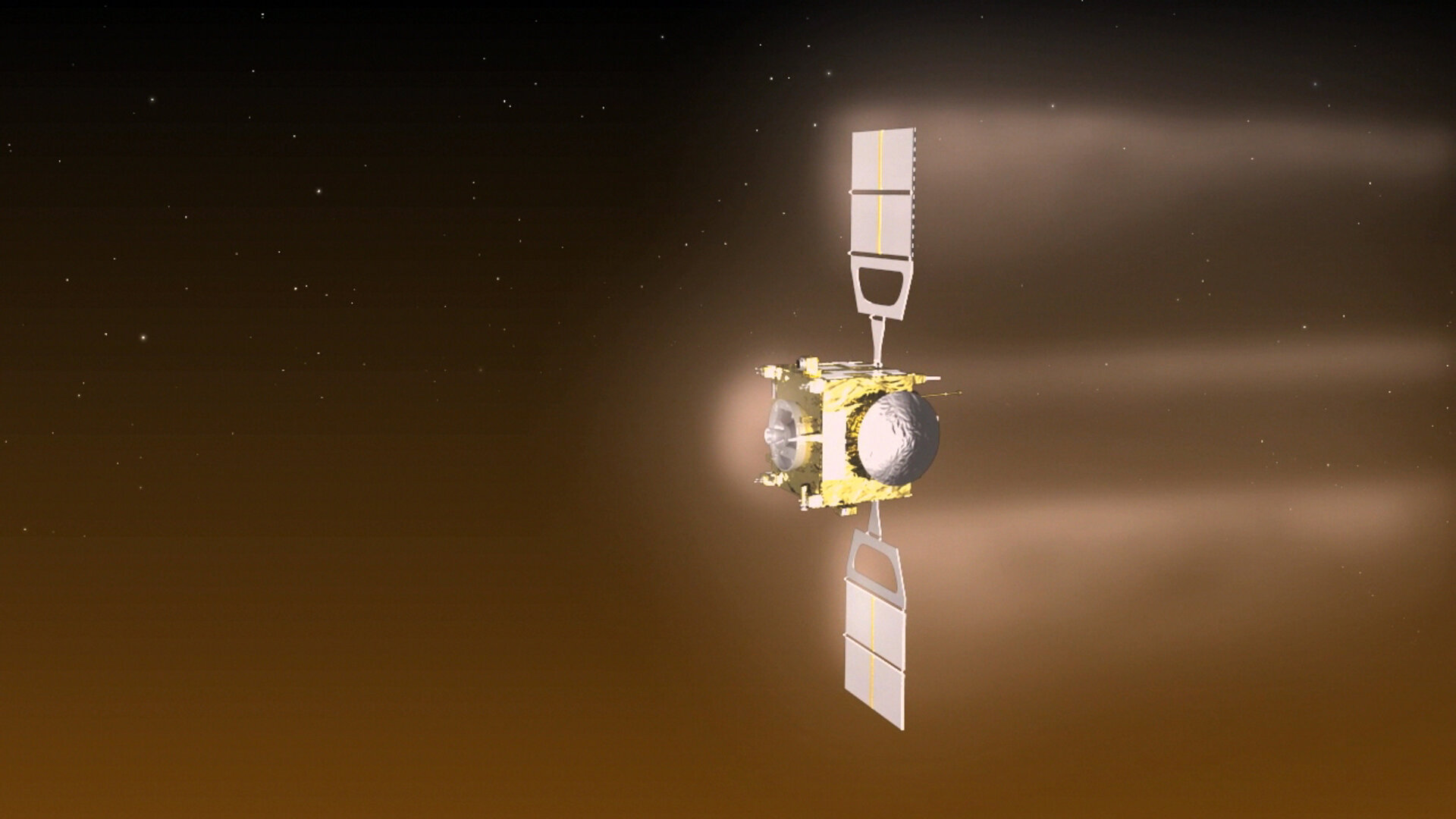 ESA’s Venus Express has ended its eight-year mission after far exceeding its planned life. The spacecraft exhausted its propellant during a series of thruster burns to raise its orbit following the low-altitude aerobraking earlier this year.

Since its arrival at Venus in 2006, Venus Express had been on an elliptical 24‑hour orbit, traveling 66 000 km above the south pole at its furthest point and to within 200 km over the north pole on its closest approach, conducting a detailed study of the planet and its atmosphere.

However, after eight years in orbit and with propellant for its propulsion system running low, Venus Express was tasked in mid-2014 with a daring aerobraking campaign, during which it dipped progressively lower into the atmosphere on its closest approaches to the planet.

Normally, the spacecraft would perform routine thruster burns to ensure that it did not come too close to Venus and risk being lost in the atmosphere. But this unique adventure was aimed at achieving the opposite, namely reducing the altitude and allowing an exploration of previously uncharted regions of the atmosphere.

The campaign also provided important experience for future missions – aerobraking can be used to enter orbit around planets with atmospheres without having to carry quite so much propellant.

Between May and June 2014, the lowest point of the orbit was gradually reduced to about 130–135 km, with the core part of the aerobraking campaign lasting from 18 June to 11 July.

After this month of ‘surfing’ in and out of the atmosphere at low altitudes, the lowest point of the orbit was raised again through a series of 15 small thruster burns, such that by 26 July it was back up to about 460 km, yielding an orbital period of just over 22 hours.

The mission then continued in a reduced science phase, as the closest approach of the spacecraft to Venus steadily decreased again naturally under gravity.

Under the assumption that there was some propellant still remaining, a decision was taken to correct this natural decay with a new series of raising manoeuvres during 23–30 November, in an attempt to prolong the mission into 2015.

However, full contact with Venus Express was lost on 28 November. Since then the telemetry and telecommand links had been partially re-established, but they were very unstable and only limited information could be retrieved.

“It seems likely, therefore, that Venus Express exhausted its remaining propellant about half way through the planned manoeuvres last month.”

Unlike cars and aircraft, spacecraft are not equipped with fuel gauges, so the time of propellant exhaustion for any satellite – especially after such a long time in space – is difficult to predict. The end could not be predicted but was not completely unexpected either.

Without propellant, however, it is no longer possible to control the attitude and orient Venus Express towards Earth to maintain communications. It is also impossible to raise the altitude further, meaning that the spacecraft will naturally sink deeper into the atmosphere over the coming weeks.

“After over eight years in orbit around Venus, we knew that our spacecraft was running on fumes,” says Adam Williams, ESA’s acting Venus Express spacecraft operations manager.

“It was to be expected that the remaining propellant would be exhausted during this period, but we are pleased to have been pushing the boundaries right down to the last drop.”

“During its mission at Venus, the spacecraft provided a comprehensive study of the planet’s ionosphere and atmosphere, and has enabled us to draw important conclusions about its surface,” says Håkan Svedhem, ESA’s Venus Express project scientist.

Venus has a surface temperature of over 450°C, far hotter than a normal kitchen oven, and its atmosphere is an extremely dense, choking mixture of noxious gases.

One highlight from the mission is the tantalising hint that the planet may well be still geologically active today. One study found numerous lava flows that must have been created no more than 2.5 million years ago – just yesterday on geological timescales – and possibly even much less than that.

Indeed, measurements of sulphur dioxide in the upper atmosphere have shown large variations over the course of the mission. Although peculiarities in the atmospheric circulation may produce a similar result, it is the most convincing argument to date of active volcanism.

Even though the conditions on the surface of Venus are extremely inhospitable today, a survey of the amount of hydrogen and deuterium in the atmosphere suggests that Venus once had a lot of water in the atmosphere, which is now mostly gone, and possibly even oceans of water like Earth’s.

Studies of the planet’s ‘super-rotating’ atmosphere – it whips around the planet in only four Earth-days, much faster than the 243 days the planet takes to complete one rotation about its axis – also turned up some intriguing surprises. When studying the winds, by tracking clouds in images, average wind speeds were found to have increased from roughly 300 km/h to 400 km/h over a period of six Earth years.

At the same time, a separate study found that the rotation of the planet had slowed by 6.5 minutes since NASA’s Magellan measured it before completing its five-year mission at Venus 20 years ago. However, it remains unknown if there is a direct relationship between the increasing wind speeds and the slowing rotation.

“While the science collection phase of the mission is now complete, the data will keep the scientific community busy for many years to come,” adds Håkan.

“Venus Express has been part of our family of spacecraft in orbit since it was launched in 2005,” says Paolo Ferri, Head of ESA Mission Operations.

“It has been an exciting experience to operate this marvellous spacecraft in the Venus environment. The scientific success of the mission is a great reward for the work done by the operations teams and makes us more proud than sad in this moment of farewell.”

“While we are sad that this mission is ended, we are nevertheless happy to reflect on the great success of Venus Express as part of ESA’s planetary science programme and are confident that its data will remain important legacy for quite some time to come,” says Martin Kessler, Head of ESA Science Operations.

“The mission has continued for much longer than its planned lifetime and it will now soon go out in a blaze of glory.”

“Venus Express was an important element of the scientific programme of ESA and, even though mission operations are ending, the planetary science community worldwide will continue to benefit from more than eight years of Venus Express data and major discoveries which foster the knowledge of terrestrial planets and their evolution,” says Alvaro Giménez, ESA’s Director of Science and Robotic Exploration.

Summary of the first science results from the aerobraking campaign: http://sci.esa.int/venus-express/54915-venturing-into-the-upper-atmosphere-of-venus/