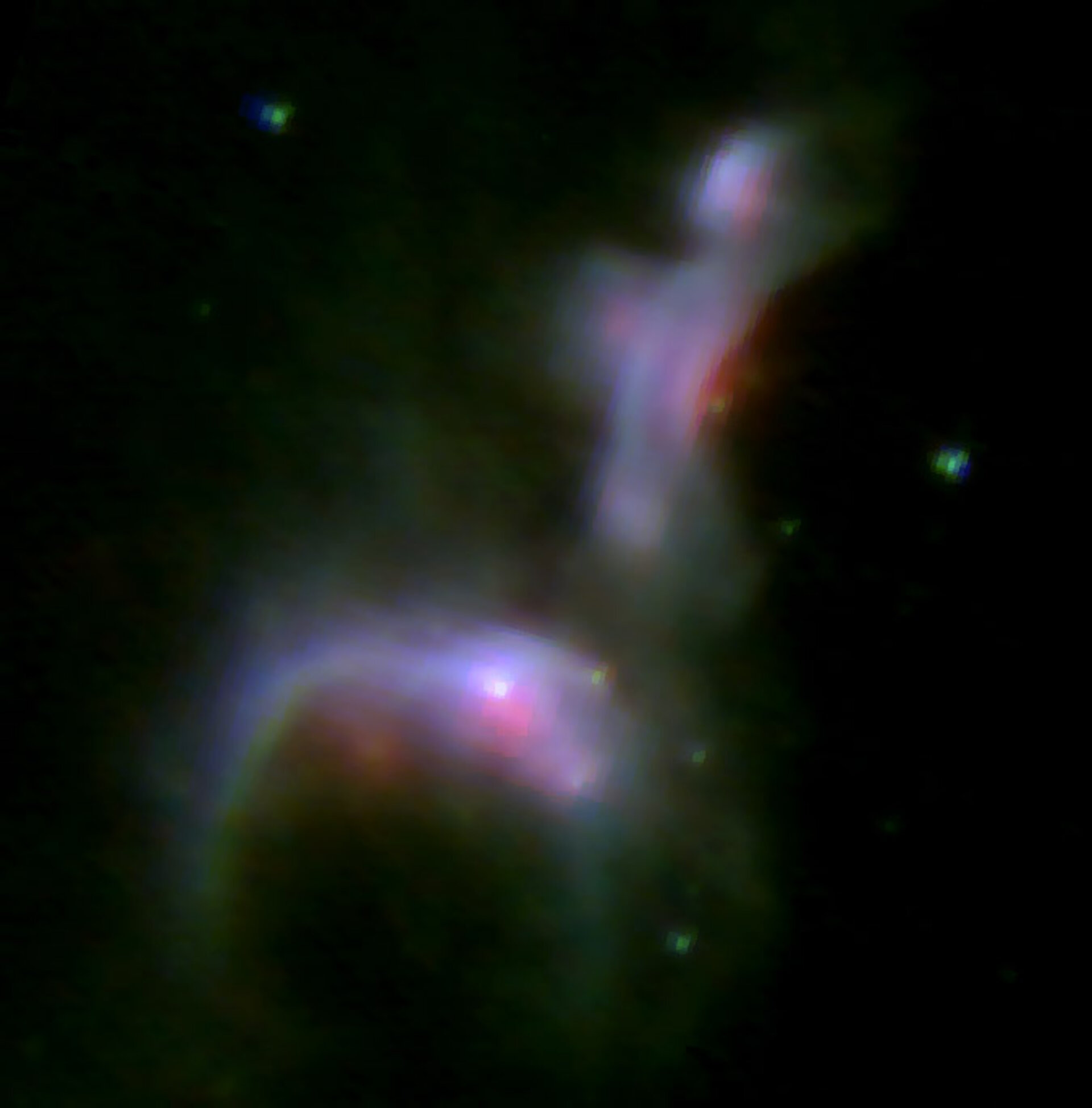 Fantastic new images and clues about stars at different stages of their evolution, and interstellar material hosting black holes, are just a few of the latest results obtained by AKARI, the newest infrared sky-surveyor mission on the scene.

Since its launch in February 2006 AKARI, a Japan Aerospace Exploration Agency (JAXA) mission with ESA participation, has been working flawlessly and has already produced outstanding views of the infrared Universe. New results, to be presented this week at the annual meeting of the National Astronomical Society of Japan, provide unprecedented glimpses of regions of intense star formation, views of stars at the very end of their life, supernova remnants never detected before in the infrared, distant galaxies and active galactic nuclei harbouring black holes surrounded by clouds of molecular gas.

When it concerns studying the formation and evolution of stars, and in more general, the evolution of galaxies in the Universe, infrared satellites like AKARI have a clear advantage. The matter ejected into interstellar space from old stars is warmed up by the stellar radiation from younger stars and by collisions with the material already present in interstellar space, and re-emits this energy at infrared wavelengths.

Since young stars are formed in high-density regions, where the interstellar gas and dust is thickest, the surrounding material veils the light from the star making observations with normal visible light extremely difficult and sometimes impossible. The absorbed light from the central shrouded star is also re-emitted at infrared wavelength. This is also the case for distant galaxies, especially newly born ones, which (like the young stars they contain) are thought to be covered by thick interstellar material. So, infrared observations play a truly crucial role for our understanding of such ‘dusty’ targets, invisible or barely visible when observed at other wavelengths.

From stellar nurseries to dying stars

The first set of AKARI results presented in this article focuses on the evolution of interstellar material in galaxies, including the cycle of star formation, supernova remnants – the residual remaining from massive stars which end their life through a catatrophic explosion - and mass-loss from red-giant stars.

New stars are born in the densest regions of interstellar clouds of gas and dust, and among the many complicated triggers for star-formation, compression of interstellar clouds by supernova explosion shocks and the strong radiation emitted from high-mass stars are especially important. Stars born in such clouds will live out their lives and also eventually evolve into supernovae or red-giants, thus providing the material for the next generation star formation and so on.

AKARI's Near- and Mid-Infrared camera (IRC) and the Far-Infrared surveyor (FIS) instruments observed this continuing cycle of star formation over three generations of stars (see image) – from the 'grandparent' stars to their 'children's children' in the nebula IC4954/4955, located in the constellation Vulpecula (about 6500 light years away from us).

For the first time ever, AKARI provided coverage of this stellar nursery at seven different infrared wavelengths, each wavelength providing information about a different facet of the star formation process. The spatial scale covered by this study was huge, up to one hundred light years in size.

AKARI's IRC instrument also made the first ever infrared detection of a supernova remnant (known as Bo404-72.3) in the Small Magellanic Cloud, a small neighbouring galaxy to our Milky Way situated around 200 000 light years from us.

This data provided key glimpses into the still poorly understood interaction between the expanding gas from supernova explosions and the surrounding interstellar material, and about its possible role in the birth of new stars.

Stars at a later stage of their life have also been observed by AKARI's IRC instrument in the globular cluster NGC 104, situated in our Galaxy about 15 000 light years away from us. The stars that populate this cluster – thought to have formed around the time of the creation of our Galaxy itself - are similar to what our Sun will become in about 6 thousand million years from now.

They have in fact extinguished their stock of fuel (hydrogen at their core) and evolved into red-giant stars. Through its observations, AKARI provided the first ever evidence for high-rate mass loss from the young red-giants in this cluster, a phenomenon thus far only observed in older red-giants.

Thanks to its fine detail probing power, AKARI also studied the material surrounding a black hole in a distant galaxy, and has observed the evolution of newly born galaxies.

The central part of the ultra-luminous infrared galaxy 'UGC 05101', located in the constellation Ursa Major at about 550 million light years away from the Earth, has been a true mystery until now. Covered by a thick cloud of interstellar material, the core region and the mechanisms at work within it were impenetrable to observation so far.

Thanks to AKARI's high sensitivity, astronomers have now gathered unprecedented data about the molecular gas cloud surrounding the region, found to be over 500°C in temperature.

Such measurements reinforce the idea that a giant black hole lurks at the core of this galaxy, emitting radiation that heats the surrounding gas to the temperature observed by AKARI, providing vital clues into the understanding of the structure of galaxies harbouring active galactic nuclei and black holes.

Last but not least, AKARI's s data has provided an unprecedented view of galaxy formation throughout the history of the Universe. By making observations at specific (15-micrometre) wavelength, astronomers can observe infrared light which was actually emitted from the galaxy about 6 thousand million years ago by young galaxies undergoing intense star formation.

Following on from the studies initiated by ESA's Infrared Space Observatory (ISO), AKARI detected 280 galaxies of this kind, performing the deepest ever wide-area survey of the Universe at this wavelength and confirming the intense star and galaxy formation in that early period of our cosmic history.

AKARI is also performing similar studies over a wide range of wavelengths – a study that will provide a definitive description of the galaxy evolution over the entire lifetime of our Universe.

AKARI was launched on 21 February 2006. It began its all-sky survey observations in May 2006 and completed its first coverage of the sky in November 2006. About 80 percent of the entire sky has so far been imaged by AKARI. The mission is currently in a phase dedicated to pointed observations, interleaved with gap-filling observations for the all-sky survey. Most of the results presented in this release are from pointed observations. It is expected that the mission liquid Helium cryogen will last until at least September 2007.

AKARI is a JAXA's mission carried out with the participation of several partners such as: the Nagoya University, The University of Tokyo and National Astronomical Observatory Japan; the European Space Agency (ESA); the Imperial College London, the University of Sussex and The Open University (UK); the University of Groningen / SRON (The Netherlands); the Seoul National University (Korea). The far-infrared detectors were developed under collaboration with The National Institute of Information and Communications Technology (Japan).

ESA/ESAC provides expertise and support for the sky-survey data processing through the pointing reconstruction – this allows the determination of accurate astronomical positions for each of the sources detected. ESAC also provides user support for the European astronomers who have been granted observing opportunities. ESA/ESOC is providing the mission with ground support through its ground station in Kiruna, for several passes per day.