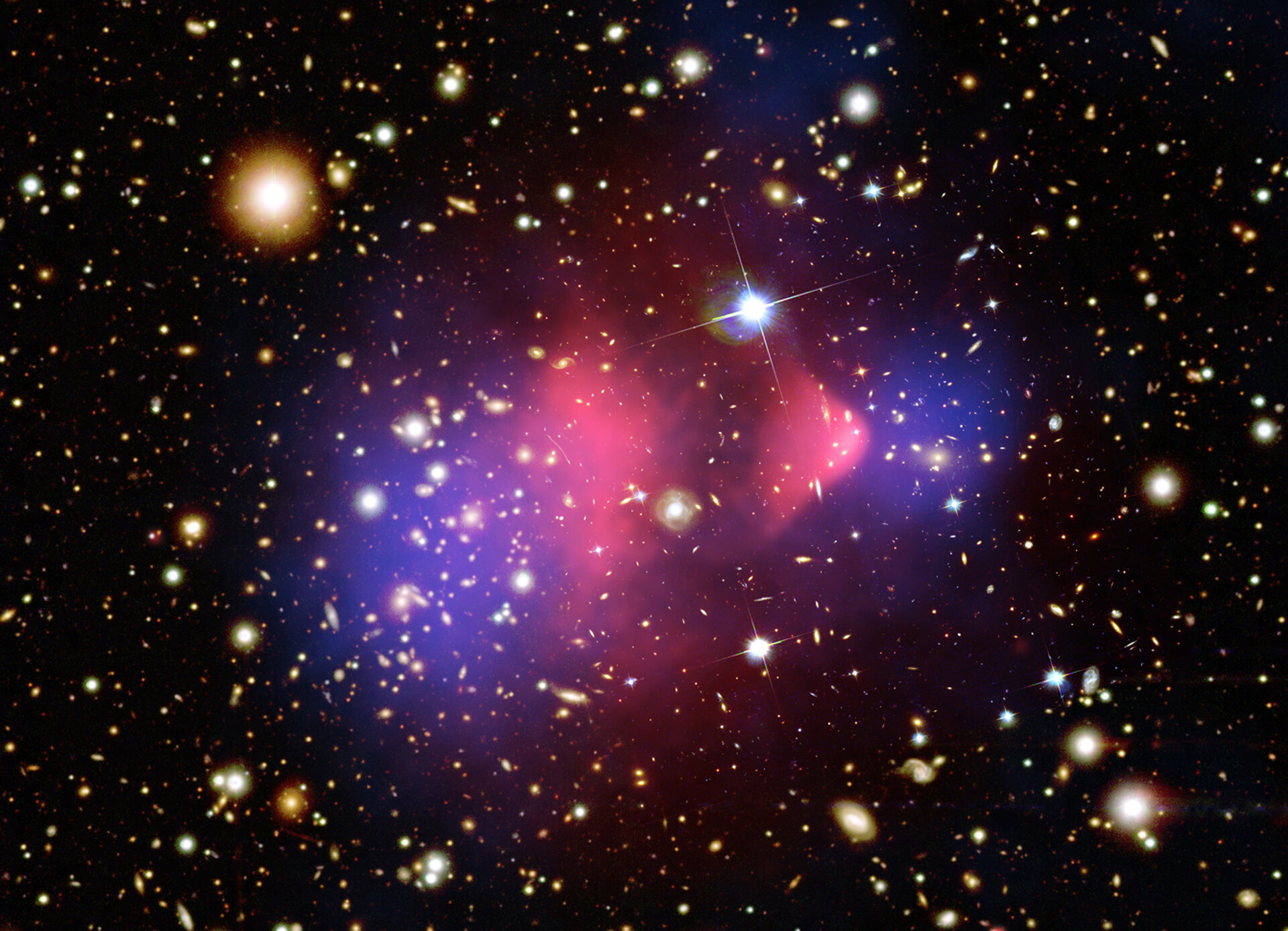 The orbiting X-ray telescopes XMM-Newton and Chandra have caught a pair of galaxy clusters merging into a giant cluster. The discovery adds to existing evidence that galaxy clusters can collide faster than previously thought.

When individual galaxies collide and spiral into one another, they discard trails of hot gas that stretch across space, providing signposts to the mayhem. Recognising the signs of collisions between whole clusters of galaxies, however, is not as easy.

Previous X-ray observations had hinted that the gas was not moving uniformly across the cluster. Using the superior sensitivity and spectral resolution of XMM-Newton and Chandra’s high spatial resolution, Dupke took readings from two locations in the cluster and saw that there was a distinct difference in the velocity of the gas. One part of the cluster seemed to be moving away from us faster than the other.

The puzzle was that the moving gas itself was cold by astronomical standards. If this gas moved at such high speeds, it should have had a temperature of more than double the measured 50 million degrees Celsius. “The only explanation was to take the Bullet Cluster and turn it in the line of sight, such that one galaxy cluster is directly behind the other” says Dupke.

The Bullet Cluster is a much-studied pair of galaxy clusters, which have collided head on. One has passed through the other, like a bullet travelling through an apple. In the Bullet Cluster, this is happening across our line of sight, so we can clearly see the two clusters.

Dupke realised that Abell 576 is also a collision, but seen head on, so one cluster is now almost directly behind the other. The ‘cold’ clouds of gas are the cores of each cluster, which have survived the initial collision but will eventually fall back together to become one.

The data reveals that the clusters have collided at a speed of over 3300 km/s. This is interesting because there are some computer models of colliding galaxy clusters that suggest that such a high speed is impossible to reach.

Nevertheless, the Bullet Cluster is estimated to have a collision speed similar to the Abell 576 system. “There is now a growing body of evidence that these high collision velocities are possible,” says Dupke. The job of explaining these high speeds now rests with the cosmologists.

Major cluster-cluster collisions are expected to be rare, with estimates of their frequency ranging from less than one in a thousand clusters to one in a hundred. On collision, their internal gas is thrown out of equilibrium and if unrecognised, causes underestimation of its mass by between 5 and 20 percent.

This is important because the masses of the various galaxy clusters are used to estimate the cosmological parameters that describe how the universe expands. So, identifying colliding systems is extremely important to our understanding of the universe.

Dupke and colleagues are already investigating a number of other clusters that also appear to be interacting.

The findings appear in the paper ‘The merger in Abell 576: a line of sight bullet cluster?’ , by R. A. Dupke, N. Mirabal, J. N. Bregman & A. E. Evrard, accepted for publication in the Astrophysical Journal.

Part of the study was carried out while the lead author, Renato Dupke, was a visiting professor at the University of Sao Paulo, Brazil.