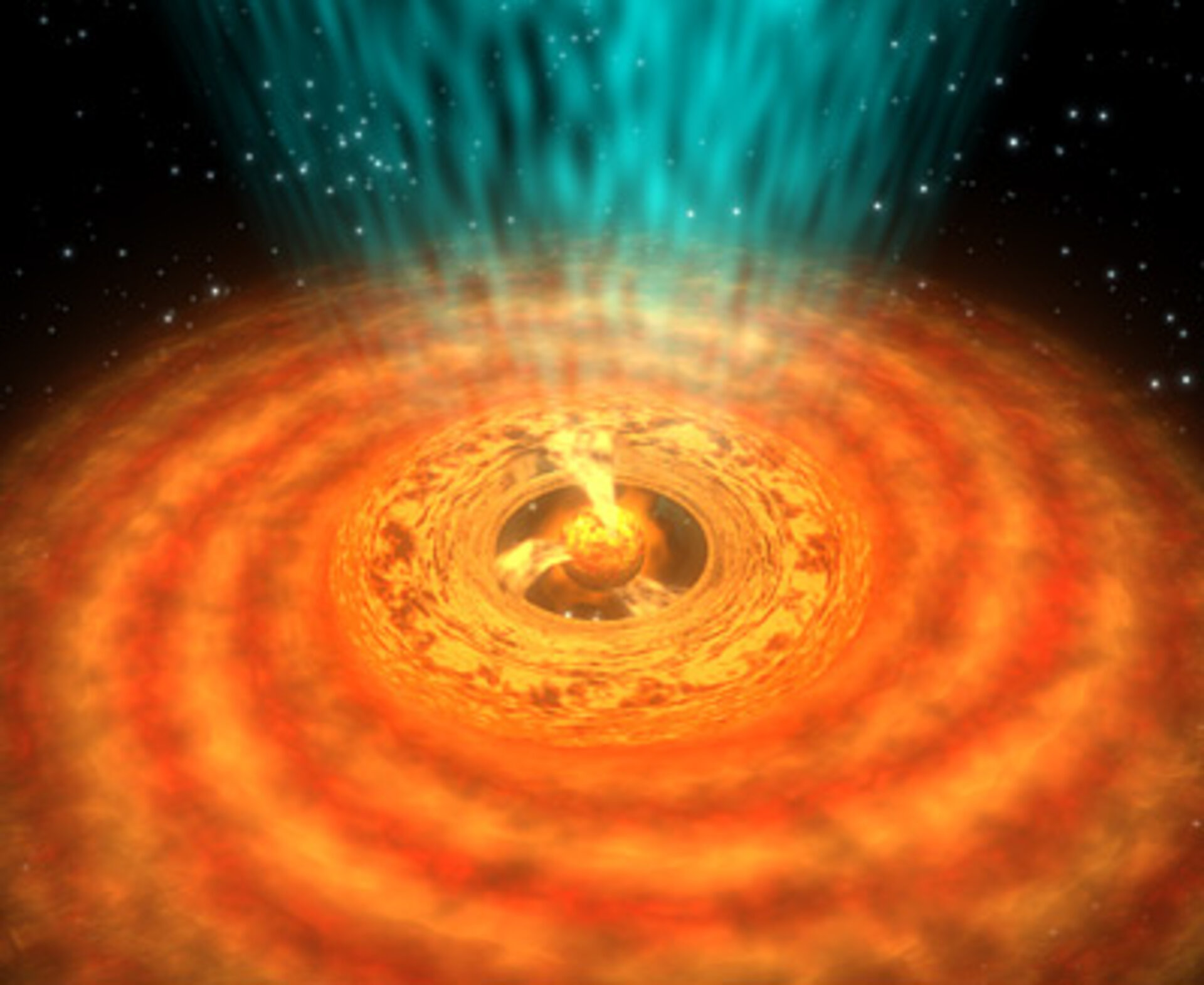 XMM-Newton has surveyed nearly two hundred stars under formation to reveal, contrary to expectations, how streams of matter fall onto the young stars’ magnetic atmospheres and radiate X-rays.

The results defy astronomers’ expectations, as the streams of falling matter interact with the hot corona, cooling it, while the ejected streams of gas heat up in shocks as they are ejected from the star.

The new XMM-Newton results paint a dramatic picture of the role magnetic fields play in star formation. “Star formation is a battle between gravity and everything else,” says Manuel Guedel, Paul Scherrer Institut, Villigen, Switzerland, who leads a large project addressing magnetic activity in young stars within the constellation of Taurus.

Star formation results in a complicated system in which the young star is surrounded by a disc of gas and dust. This matter then follows one of three different routes. It finds its way onto the star through magnetic funnels, or stays in the disc to form planets, or is thrown clear of the system in a wind or jet created by the overall magnetic field.

With the help of ESA’s X-ray observatory XMM-Newton, Guedel and his 25 international colleagues are now ready to report new details from the front line.

They used XMM-Newton to target stars in the nearby Taurus Molecular Cloud. This vast cloud in space is one of the star - forming regions nearest to Earth and contains over 400 young stars.

Most of these stars are still accumulating matter, a process known as accretion. As falling matter strikes the surface of the star, it typically doubles the temperature of the surface from 5000 Kelvin to Kelvin. This produces an excessive amount of ultraviolet radiation emitted by the star and detected by XMM-Newton’s Optical Monitor. Astronomers had thought that the same shock waves that caused the emission of the ultraviolet excess should also produce an excess of X-rays.

Confusingly enough, previous observations seemed to show that young stars that still accrete matter give off less X-ray emission. To investigate this mystery, amongst several others, ESA approved a large programme of observations with XMM-Newton. The space-borne observatory investigated the densest regions of the Taurus Molecular Cloud for a total of more than 7 days.

The new results from XMM-Newton propose a solution to the mystery. In addition, they bring forward unanticipated discoveries. “We have not seen the expected X-rays that the shocks should produce on the surface of some stars,” says Guedel.

Instead, XMM-Newton’s spectrometers revealed a new and subtle feature suggesting that the falling material cooled the hot X-ray emitting atmosphere of the young stars, suppressing the emission of X-rays.

In certain cases, namely in the more heavily accreting stars, the suppression of the X-rays was such that the team realised that an additional process was at work in these objects. In addition to cooling the outer stellar atmosphere, the gas streams falling onto the star were so dense that they absorbed most of the X-rays that the star’s atmosphere had emitted.

Although such dense streams of gas should also contain dust that would obscure the star at visible wavelengths, the star is seen shining brightly. So what happens to this dust? The team can propose an answer to this as well. “The dust is heated so much by the radiation from the star, that it is vaporised before it can fall on the star,” says Guedel.

The strong X-ray suppression allowed the team to discover yet another X-ray source associated with the same stars coming from relatively cool gas that does not suffer from absorption. "This emission must come from outside the accretion streams," says Guedel. The team interprets the X-rays as evidence that some gas streams ejected by the star form shock waves that heat up very strongly.
The work gives astronomers powerful new insight into the tremendous forces at work in star formation.

A collection of 15 papers reporting the above results and many others is published in Astronomy and Astrophysics on 31 May 2007.

The XMM-Newton Extended Survey of the Taurus Molecular Cloud (XEST project has been conducted by an international team under the leadership of the Paul Scherrer Institute in Switzerland.