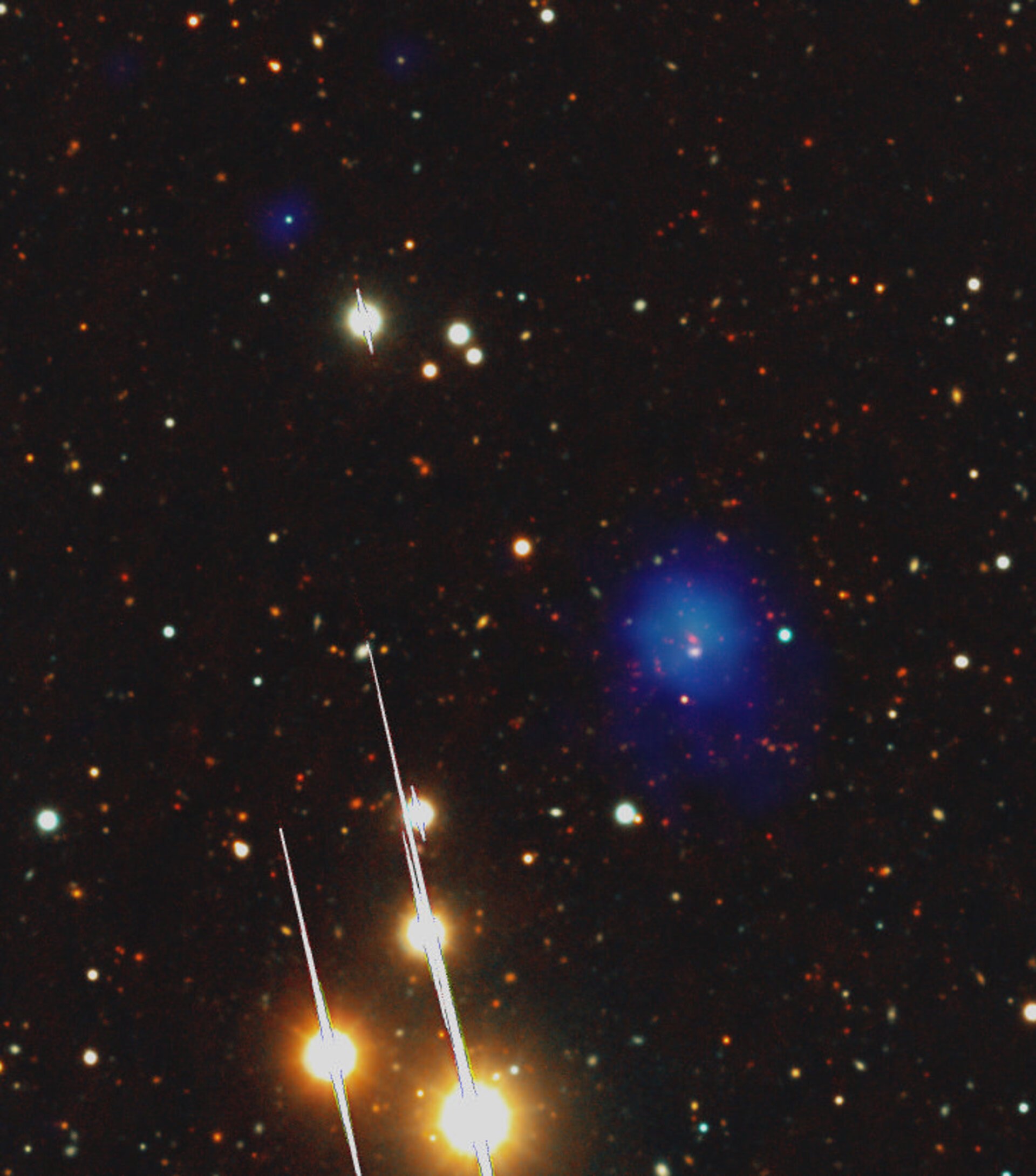 ESA’s orbiting X-ray observatory XMM-Newton has discovered the most massive cluster of galaxies seen in the distant Universe until now. The galaxy cluster is so big that there can only be a handful of them at that distance, making this a rare catch indeed. The discovery confirms the existence of dark energy.

The newly-discovered monster, known only by the catalogue number 2XMM J083026+524133, is estimated to contain as much mass as a thousand large galaxies. Much of it is in the form of 100-million-degree hot gas. It was first observed by chance as XMM-Newton was studying another celestial object and 2XMM J083026+524133 was placed in a catalogue for a future follow-up.

Georg Lamer, Astrophysikalisches Institut Potsdam, Germany, and a team of astronomers discovered the record-breaking cluster as they were performing a systematic analysis of the catalogue. Based on 3500 observations performed with XMM-Newton's European Photon Imaging Camera (EPIC) covering about 1% of the entire sky, the catalogue contains more than individual X-ray sources. The team were looking for extended patches of X-rays that could either be nearby galaxies or distant clusters of galaxies.

Indeed, the very presence of this cluster confirms the existence of a mysterious component of the Universe called dark energy.

J083026+524133 stood out because it was so bright. While checking visual images from the Sloan Digital Sky Survey, the team could not find any obvious nearby galaxy in that location. So they turned to the Large Binocular Telescope in Arizona and took a deep exposure.

Sure enough, they found a cluster of galaxies. So the team calculated a distance of 7.7 thousand million light-years and the cluster's mass using the XMM-Newton data. This was not a surprise because XMM-Newton is sensitive enough to routinely find galaxy clusters at this distance. The surprise was that the cluster contains a thousand times the mass of our own galaxy, the Milky Way.

“Such massive galaxy clusters are thought to be rare objects in the distant Universe. They can be used to test cosmological theories,” says Lamer. Indeed, the very presence of this cluster confirms the existence of a mysterious component of the Universe called dark energy.

No one knows what dark energy is, but it is causing the expansion of the Universe to accelerate. This hampers the growth of massive galaxy clusters in more recent times, indicating that they must have formed earlier in the Universe. “The existence of the cluster can only be explained with dark energy,” says Lamer.

Yet he does not expect to find more of them in the XMM-Newton catalogue. “According to the current cosmological theories, we should only expect to find this one cluster in the 1% of sky that we have searched,” says Lamer.

In other words, the team have found a cosmic ‘needle in a haystack’.