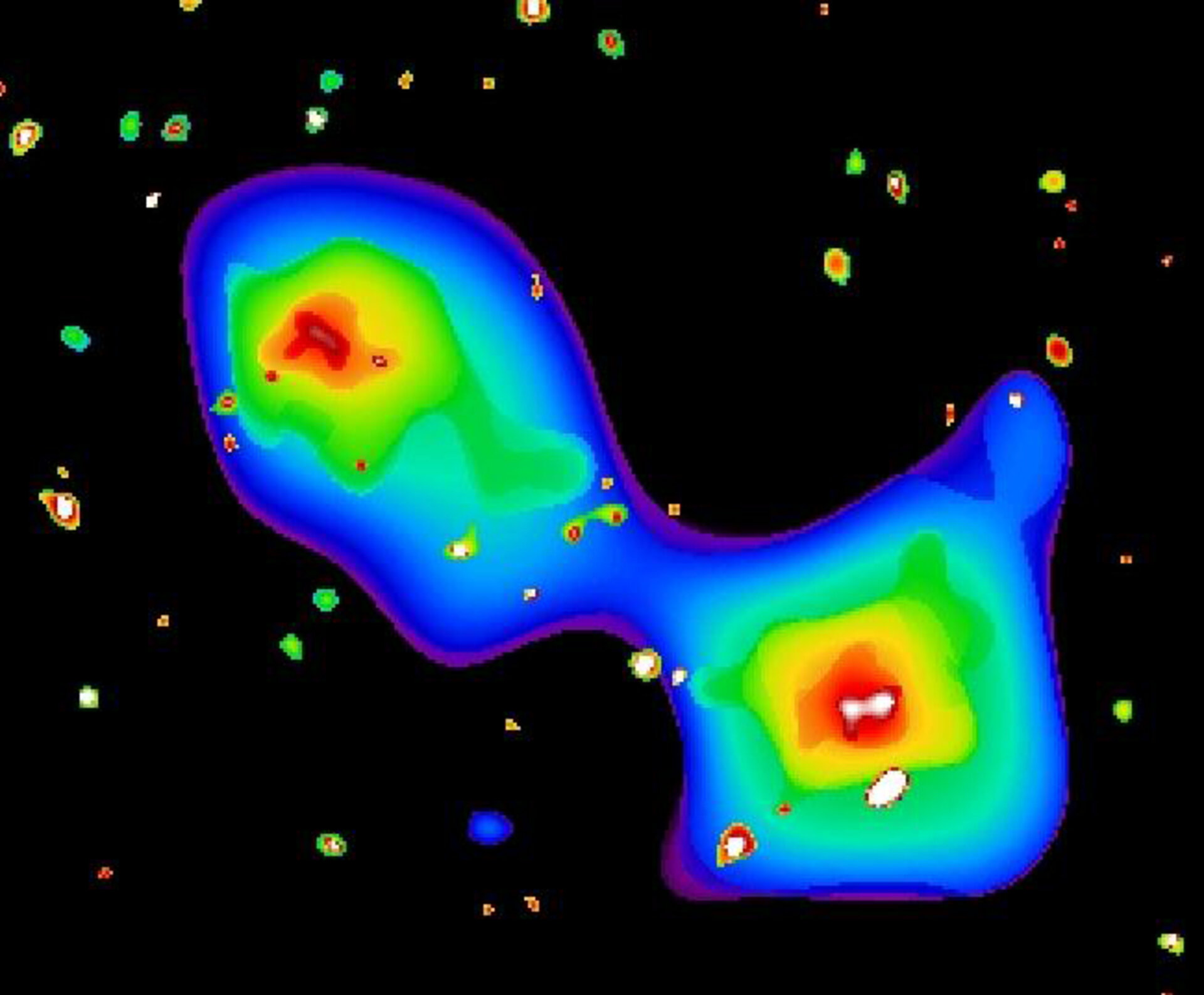 Astronomers working with XMM-Newton have discovered a new cluster of galaxies, hidden behind a previously identified cluster of galaxies. The recently exposed cosmic giant is apparently just as bright as the first group, but is six times further away.

The discovery was made by an international team using ESA’s orbiting X-ray observatory. Being fooled by a cosmic giant is no laughing matter for an astronomer. For years, astronomers racked their brains over the relation between two regions equally bright and large in X-rays, located in the galaxy cluster known as Abell 3128. “That is the charm of science”, says Norbert Werner, PhD student at SRON Netherlands institute for Space Research. “You always find things that you did not expect.”

Galaxy clusters are the largest structures in the universe. They consist of tens to hundreds of massive galaxies, of which each in turn consists of hundreds of billions of stars. Gravity is the binding factor. The hot cluster gas, at temperatures of tens of millions of degrees Celsius, emits X-rays, which renders the cluster visible for space telescopes such as XMM-Newton. Detailed analyses of these X-rays tell astronomers more about the composition of the gas and accordingly, its origin.

What was so intriguing about the two X-ray spots in cluster Abell 3128 was the fact that although they had the same size and brightness, the gas clouds seemed to have completely different compositions.

Werner says, “While one spot was clearly caused by a hot gas cloud rich in metals released by supernova explosions in the galaxies, the other spot seemed to contain a much lower amount of metals than any other cluster previously observed. What we observed completely contradicted the current theories about how large structures in the universe arise.”

The observations with XMM-Newton made the surprise complete. The gas cloud behind the puzzling X-ray spot was found to be 4.6 thousand million light years away, at least six times further than Abell 3128. “We were therefore looking at two completely different objects, which from our perspective were in exactly the same line of sight,” said Werner.

“The research into this large cluster of galaxies mainly centres on the question as to how the large structures of the universe have been formed’, explains project leader Jelle Kaastra. According to current belief, material is spread throughout the universe as a web of thread-like structures of rarefied hot gas - the cosmic web. Between these threads are cavities that are becoming increasingly large as the universe expands. “Compare it to bubbles in a bubble bath”, says the astronomer. The density of material is highest at the intersections in the web. Therefore that is where galaxy clusters develop.

Due to their enormous mass and gravitational attraction, the clusters have their own dynamics. Kaastra says, “They attract each other, collide and fly through each other; a whole host of things happen that we can study with X-ray telescopes such as the XMM-Newton.”

SRON Netherlands Institute for Space Research built the Reflection Grating Spectrometer (RGS), capable of analysing the X-rays in detail for ESA’s orbiting X-ray observatory, XMM-Newton. The satellite was launched in 1999 from French Guyana and still functions superbly. The operation of the satellite has recently been extended for five more years, until December 2012.

The results from the research of Norbert Werner and Jelle Kaastra were recently published in the scientific journal Astronomy & Astrophysics. The article ‘Complex X-ray morphology of Abell 3128: a distant cluster behind a disturbed cluster’ is by N. Werner, E. Churazov, A. Finoguenov, M. Markevitch, R. Burenin, J. Kaastra, and H. Böhringer.