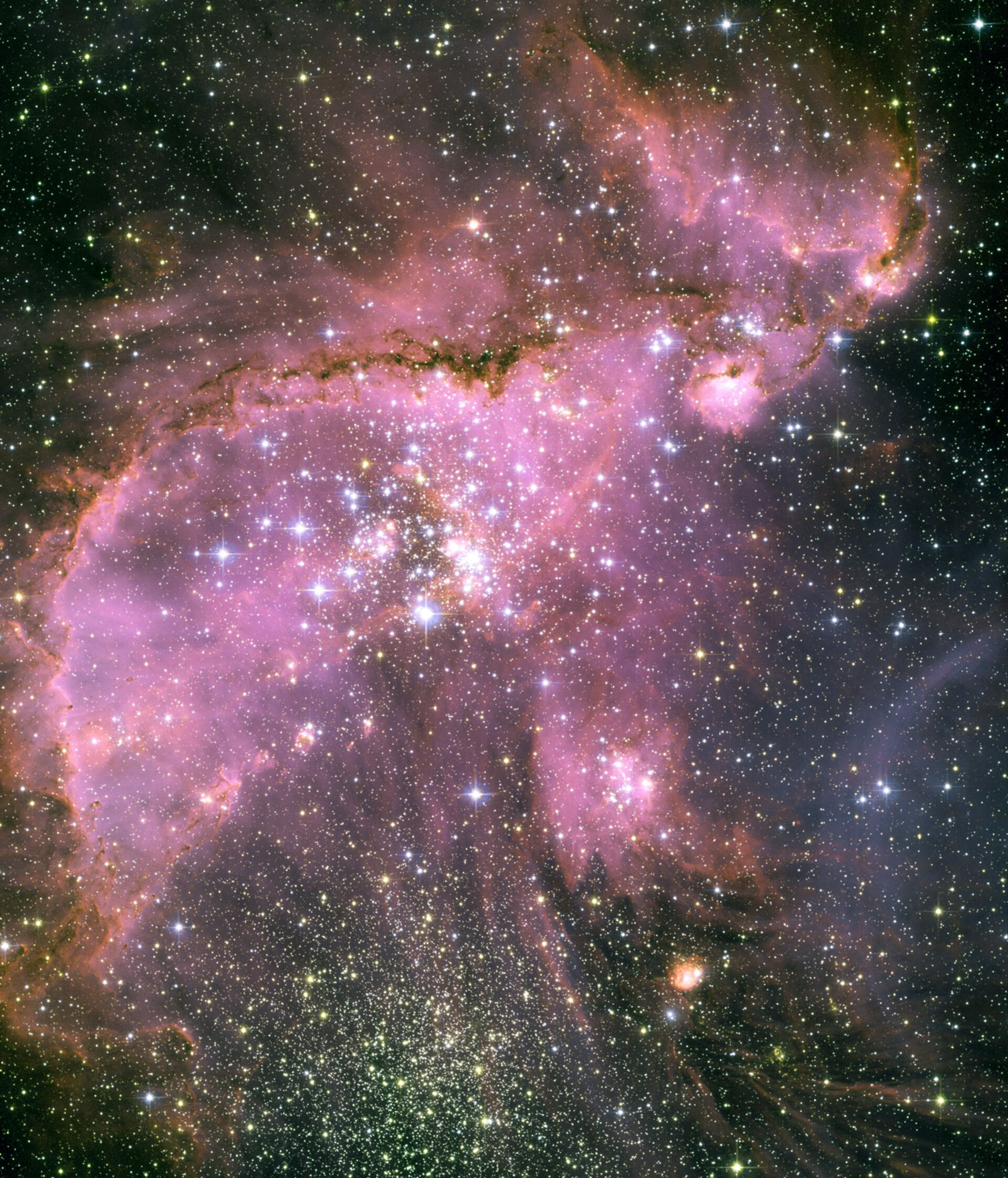 This NASA/ESA Hubble Space Telescope view shows one of the most dynamic and intricately detailed star-forming regions in space, located 210 000 light-years away in the Small Magellanic Cloud (SMC), a satellite galaxy of our Milky Way.

At the centre of the region is a brilliant star cluster called NGC 346, a dramatic structure of arched, ragged filaments with a distinct ridge surrounding the cluster.

A torrent of radiation from the hot stars in the cluster NGC 346, at the centre of this Hubble image, eats into denser areas around it, creating a sculpture of dust and gas. The dark, intricately beaded edge of the ridge, seen in silhouette, is particularly dramatic. It contains several small dust globules that point back towards the central cluster.

A torrent of radiation from the hot stars in the cluster eats into denser areas around it, creating a sculpture of dust and gas

An international team of astronomers, led by Dr Antonella Nota of ESA and the Space Telescope Science Institute in USA, has been studying the Hubble data. The team reports the discovery of a rich population of infant stars scattered around the young cluster NGC 346.

These stars are likely to have formed three to five million years ago, together with the other stars in the NGC 346 cluster. These infant stars are particularly interesting as they have not yet contracted to the point where their interiors are hot enough to convert hydrogen to helium.

These infant stars have not yet contracted to the point where their interiors are hot enough to convert hydrogen to helium.

The Small and Large Magellanic Clouds are diffuse irregular galaxies visible to the naked eye in the southern hemisphere. They are two smallish satellite galaxies that orbit our own Milky Way on a long slow journey inwards towards a future union with the Milky Way.

Hubble has resolved many star formation regions in both of these neighbouring galaxies that provide astronomers with laboratories other than our own Milky Way Galaxy to study how young stars interact with and shape their environments.

The two satellite galaxies are named after the Portuguese seafarer Ferdinand Magellan (1480-1521) who sailed from Europe to Asia and is best known as the first person to lead an expedition to circumnavigate the globe.