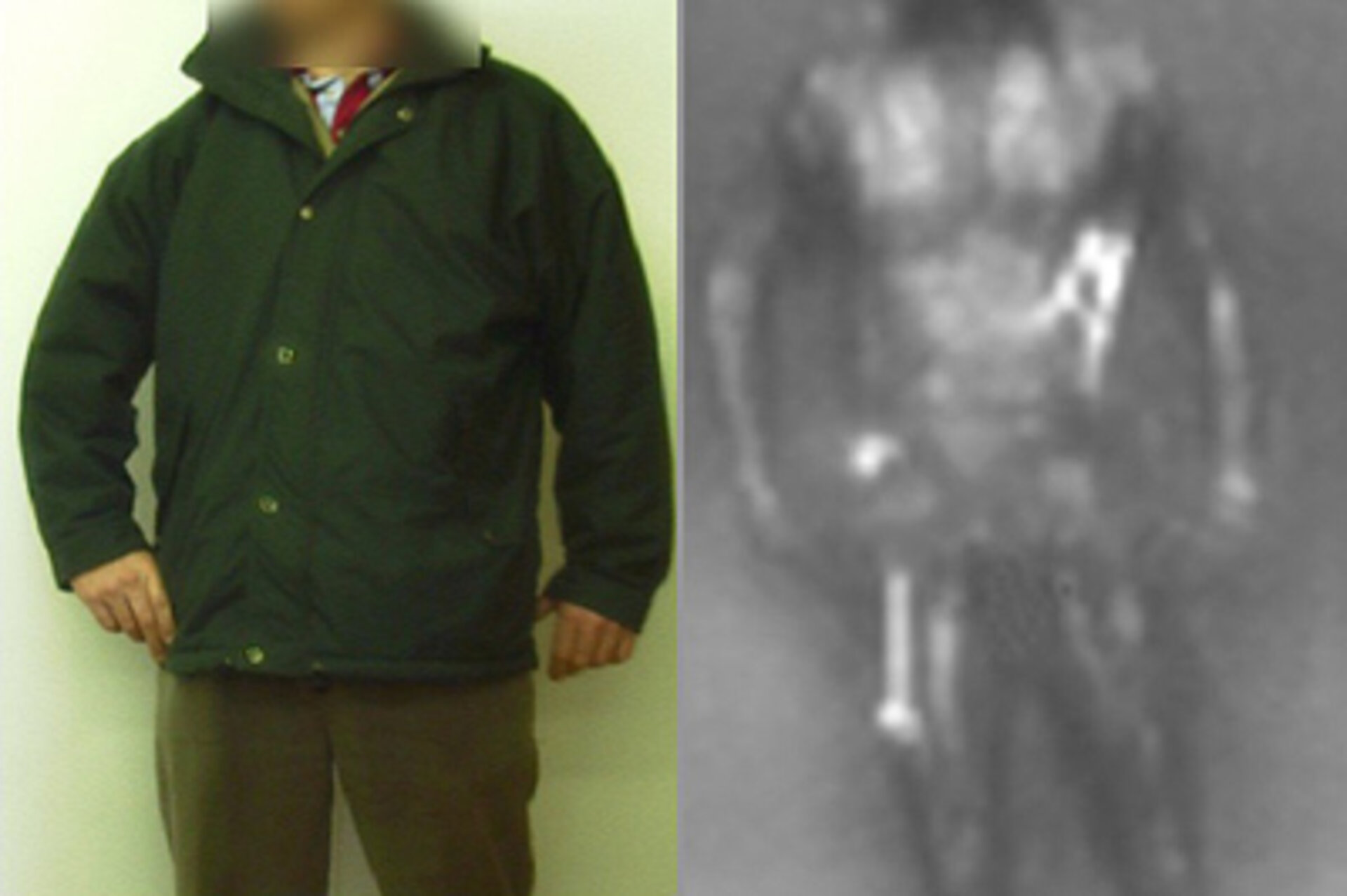 Metal detectors currently used for screening aircraft passengers could soon be supplanted by novel millimetre-wave cameras, able to detect even non-metallic concealed objects. The new system, named after a Brazilian bat, is based on technology developed for ESA spacecraft. Tadar is being demonstrated at this week's Inter Airport Europe Exhibition in Munich.

Conventional metal detectors, such as those used to check passengers at airports, are limited in that they can only detect metal objects. Other security technologies such as the X-ray imaging used to screen luggage, are unsuitable for checking people because of their use of ionizing radiation.

An Irish company has now come up with a new security imaging system that can ‘see’ all objects, not just metallic items, by the use of only safe natural energy. Named Tadar, after the Brazilian Tadarida bat, it uses millimetre-waves to detect and identify suspicious objects hidden under clothing or to see through cloud and fog, in the same way that the bat uses high-frequency signals to navigate and locate insect prey in the dark. The high-frequency energy pulses emitted by the bat bounce off objects in its path and the reflected signals are interpreted by different types of sensory cell in the bat’s brain to determine both the location and physical properties of these objects.

"This new system is based on advanced microwave technology that Farran, now part of the Smith Group, has developed for space systems,” explains Tony McEnroe, Managing Director of Farran Technology. "We developed the knowledge and skills while designing and packaging millimetre-wave devices for ESA projects. By integrating a novel scanning technology we have achieved a unique system for detecting and imaging items for security applications."

Tadar’s sensors detect energy naturally emitted or reflected from objects, by using approximately 3-mm wavelengths that are completely harmless to people. At this wavelength clothes become transparent but dense objects such as explosives and weapons hidden under clothing block the body’s natural radiation and reflect a clear profile of the blocked energy field.

Door keys, money, pocket knives and other objects that we normally carry in our pockets will stand out clearly. Even weapons produced in non-metallic materials and plastic explosives which conventional metal detectors cannot ‘see’, will clearly be identified, as well as liquid substances. Each type of material has its own frequency response and will produce its own representative ‘colour’ image, almost like a fingerprint.
High-frequency space components for new security system

Founded in 1977, Farran Technology has been supplying ESA for years with high-frequency microwave components and subsystems. Since 1998, the improved materials used for integrated circuits have permitted the production of integrated circuit devices able to operate within the millimetre-wave spectrum - the 30-300 GHz range of the frequency spectrum - used for a broad range of applications from advanced astronomy to broadband radio communications.

This advance enabled Farran to develop an in-house capability in the design and development of high-frequency circuits. Working together with the National Microelectronics Research Centre (NMRC) in Ireland and Fraunhoffer Institute in Germany, Farran led an ESA project in developing Monolithic Microwave Integrated Circuits (MMIC) technology for operating in the 100 GHz band.

This area of the spectrum is very useful for inter-satellite communications due to its high signal bandwidth and low data loss. The first prototype devices have been successfully built and tested and will be delivered to ESA later this year. It is this very special expertise that Farran has used to develop their new Tadar camera.
Tadar in action – from up to 50 metres away

When someone stands in front of the Tadar camera they are scanned fully-clothed to measure their body’s natural radiation against a temperature controlled background panel. The presence of any dense object will block the body’s natural energy and the Tadar camera will detect the background temperature that is reflected off the object. The resultant thermal contrast presents a clear image of the suspect object.

"The system can work in passive and active mode, without any change in its mechanical or optical configuration. In passive mode the person to be screened must stand in front of the system, while in active mode the system can produce three-dimensional images of a scene, even at a distance of over 50 metres," emphasises McEnroe.

"The primary applications for our Tadar system are security screening of people in airports and buildings where conventional metal detectors are used today. In future, the same technology could also be used to improve on existing infrared-based enhanced vision systems that enable pilots to see through clouds, as well as identify foreign objects on airport runways."

ESA’s industrial delegate with Enterprise Ireland, Tony McDonald, says: "We are encouraging Irish companies such as Farran Technology, which have developed skills through working on ESA Space programmes, to exploit them commercially."

The ESA Technology Transfer Programme (TTP) in Ireland was launched in February 2003 by Irish Prime Minister, Bertie Ahern. More than 100 Irish companies participated at the launch event in Galway.

Pierre Brisson, Head of ESA's Technology Transfer and Promotion Office, says, "This important advancement in security systems that has been developed in Ireland, illustrates the potential of space technologies developed by European companies."

The Tadar system was unveiled this week by Smiths Detection at the Inter Airport Europe Exhibition in Munich Airport. The exhibition is open until 14 October. Later this month it will be demonstrated at the IATA AVSEC World 2005 exhibition on aviation security taking place 25-27 October at the Crowne Plaza Hotel in Geneva, Switzerland.