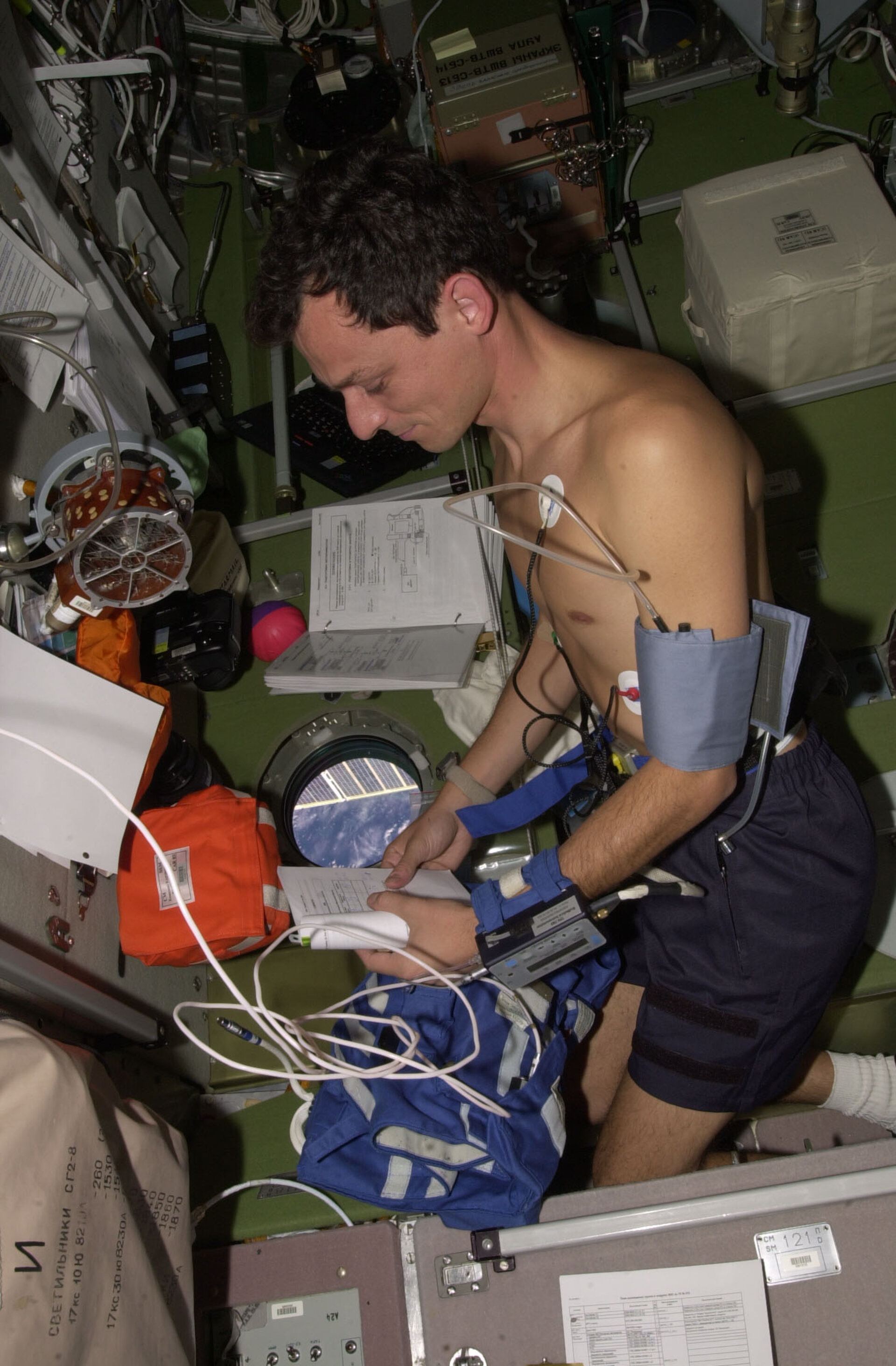 I am writing these notes in the Soyuz with a cheap ballpoint pen. Why is that important? As it happens, I've been working in space programmes for seventeen years, eleven of these as an astronaut, and I've always believed, because that is what I've always been told, that normal ballpoint pens don't work in space.

"The ink doesn't fall", they said. "Just try for a moment writing face down with a ballpoint pen and you will see I'm right", they said.

During my first flight I took with me one of those very expensive ballpoint pens with a pressure ink cartridge, the same as the other Shuttle astronauts. But the other day I was with my Soyuz instructor and I saw he was preparing the books for the flight, and he was attaching a ballpoint pen with a string for us to write once we were in orbit. Seeing my astonishment, he told me the Russians have always used ballpoint pens in space.

So I also took one of our ballpoint pens, courtesy of the European Space Agency (just in case Russian ballpoint pens are special), and here I am, it doesn't stop working and it doesn't 'spit' or anything. Sometimes being too cautious keeps you from trying, and therefore things are built more complex than necessary.

But that was not the topic of this message. From a height of 215 km (it's 11:07 Moscow time right now) the clouds look gorgeous, with a three-dimensional quality that I couldn't see the previous time from 550 km.

Where it is warm (right now we are over the Philippines) the clouds are like fields full of mushrooms. Some seconds afterwards there's an area of high clouds, flat, looking more like a bride's veil. Some more seconds of travel and we can see a storm, a high cloud penetrating the clouds and coming up until it seems it wants to touch us. In the portions of sea we can see, the sun-glare appears now in an intense orange colour, while the atmosphere surrounds the curved horizon as a thick blue veil, strangely well defined. Its rim spreads a bit more, but it would almost look more like a liquid covered with a layer of its own vapour.

It will be the sunset in two minutes (it's 12:10 now). The Earth is already black below us and people sleep. The sun, centred in the blue arc of the atmosphere, is surrounded by blackness. There's only 30 seconds left. The low side of the atmosphere gets orange, and the sun flattens. An orange brilliance remains, then a flattened ball of light, then only the orange and blue arc of the atmosphere, and then, and only then, the higher layers of the atmosphere become visible. An arc two times wider but fainter appears on top of the previous one, ephemeral, and both disappear suddenly in the most perfect blackness. The eyes get used to it and begin to distinguish the Earth from the sky. If we are lucky we will see lights from the cities or the Aurora Borealis; if not, it will be a good time to watch the stars. This is certainly a job with good views.