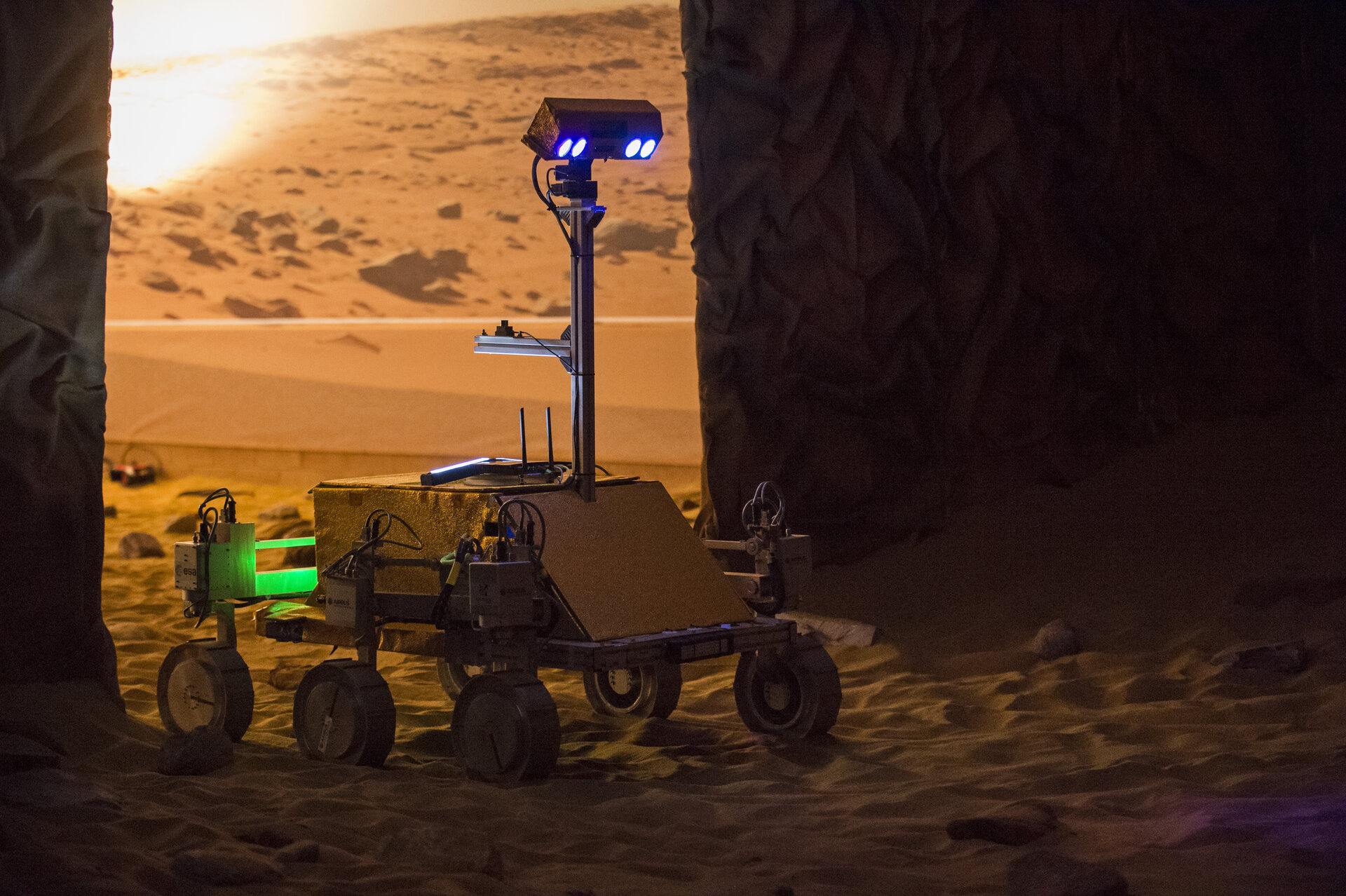 ESA astronaut Tim Peake today controlled, from the International Space Station, a rover nicknamed Bridget at Airbus Defence and Space in Stevenage as part of an international experiment to prepare for human–robotic missions to the Moon, Mars and beyond.

Building on previous test campaigns in the ESA-led Meteron project, the experiment saw ESA, the UK Space Agency and Airbus Defence and Space working together to investigate distributed control of robots in a mock-Mars environment.

David Parker, Director of Human Spaceflight and Robotic Exploration, said: “This experiment further proves we can operate rovers while orbiting a planet, another significant step in our vision to send astronauts and robots together to explore our Solar System.

“Our investments over the last years in human spaceflight and robotic exploration have showed real results today and prepared the way for our future ambitions to the Moon and beyond.”

The simulated Mars environment, dubbed the Mars Yard, was created by Airbus to develop the locomotion and navigation systems for ESA’s ExoMars rover. The experiment will provide valuable data to assess the benefits of human involvement in a rover’s path planning.

The experiment also involved teams at ESA’s ESOC operations centre in Germany, which served as the mission control centre for the experiment, and Belgium’s Station User Support and Operation Centre in Brussels, serving as the interface to the Station.

As future exploration of the Solar System is both a human and robotic endeavour, the purpose of Meteron is to prepare for missions that are likely to involve astronauts orbiting the planet and controlling or supervising rovers on its surface.

The advantage of this method is that it will cut out the time delay due to distance experienced when controlling rovers from Earth and allow more direct intervention from humans when needed, such as navigating around hazards or identifying targets.

Human exploration is a relatively new yet expanding area for the UK, where there is  a strong heritage in robotics and autonomous systems – important technologies to the country’s international competiveness, productivity and economic growth across a broad range of industrial sectors.

The international ExoMars mission is a great example of success in robotics, with the UK being the second-largest contributor to the mission through ESA. This contribution has secured the future of the high-impact space programme and given the UK the overall leadership of the rover module whose complete design, including the final integration and testing, will be done in the UK.

During the experiment, a representative mission scenario was set up in which a rover was commanded to go from a lit environment into a challenging dark location (simulating a cave or a shaded crater) and identified a number of science targets. The Mars yard (30 x 13 m) was split into two areas, one lit and one in the dark.

From one end of the yard, Airbus’s rover, named ‘Bridget’, was commanded from ESOC, ESA’s European Space Operations Centre in Germany, until it reached the edge of the shaded area.

Then at the edge of the ‘cave’, control was passed to astronaut Tim Peake, on board the Station, who controlled Bridget to drive across the yard, avoiding obstacles and identifying potential science targets, which were marked with a distinctive ultraviolet fluorescent marker.

Science on the Station

Meteron is just one of many scientific experiments that use the Space Station. Research in space crosses multiple disciplines as the Station’s unique environment offers a great opportunity to investigate novel materials, life in space, the human body, fluid physics, new technologies and much else that cannot be studied on Earth.

Since arriving on board the Station, Tim Peake has carried out a number of experiments as well been the test subject others, including: