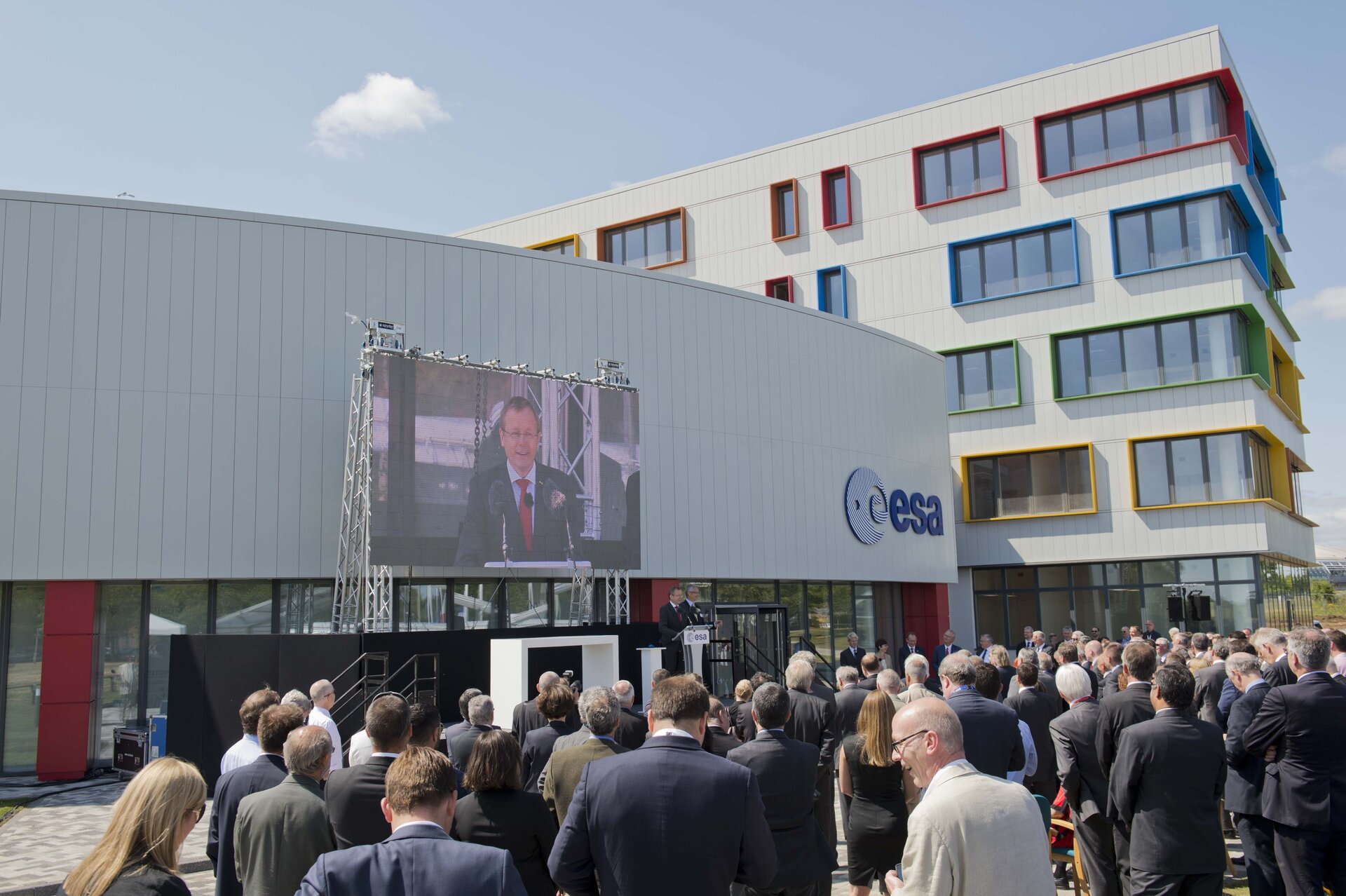 Two hundred space leaders from the public and private spheres came to ESA’s European Centre for Space Applications and Telecommunications (ECSAT) on the Harwell Campus in Oxfordshire, joined by the first ESA Director General, Roy Gibson, after whom the new building is named.

They also celebrated the opening of the Rutherford Appleton Laboratory’s Space Development and Test Facility on the campus.

ESA’s first British astronaut, Tim Peake, took part in the celebrations via Skype from Star City in Russia, where he is training for his mission to the International Space Station in December.

The event highlighted how space and space industry contribute to the economy. Space is an investment in the future. Success stories from entrepreneurs and the signing of the Quantum telecom satellite contract highlighted the recent expansion of ESA and the Science & Technology Facilities Council at Harwell Campus, in itself a growing international hub of space, science and business.

As ESA’s centre in the UK, ECSAT focuses on telecom and satcom services – the largest, fastest-growing and most profitable of all space activities. Harwell Campus is one of the biggest and most diverse science and technology campuses in the world and is also growing at an impressive rate. This is underlined by ECSAT’s new Roy Gibson building, which was built to house the sharp increase in ESA personnel in the UK.

ESA’s activities in the UK, consistently in partnership with industry and institutions, have accompanied the economic growth of the space sector, creating new business and employment.

“We put ECSAT here because of the UK’s strengths in these areas, as well as in entrepreneurship and the supporting service industries of finance and law.

“In practice, that means ECSAT leads the development of new satellite systems in areas like ultra-high definition TV broadcasting and mobile broadband services, as well as applications that require the transmission and management of Big Data, such as those focused on climate and environmental monitoring.”

Jan Woerner completed the ceremony by launching a countdown to raise the flags, adding: “With ECSAT being the most recent addition to ESA’s centres across Europe, I feel proud and honoured to share grounds with our UK friends and partners here on Harwell Campus.

“The importance of space and its broad activities are clear for all ESA Member States. Today we have reached a relevant milestone together with the UK Government and our partners. Inspiration, science, business opportunities, job creation and benefits for citizens are our permanent goal.”