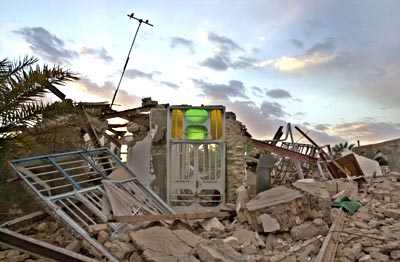 Earthquakes are the deadliest of all natural disasters. Most deaths are caused by collapsing buildings or fires.

Several million earthquakes occur in the world each year. However, many of these are undetected because they occur in remote areas or are very weak. On average, there are 18 major earthquakes and one great earthquake each year.

The most recent major earthquake took place on the island of Haiti in the West Indies. The Haitian government reported that 230,000 people had died, 300,000 had been injured and one million made homeless.

Earthquakes are most common near large cracks in the Earth’s crust, known as “faults”. They often occur in southern Europe, where two large slabs of crust are moving towards each other. 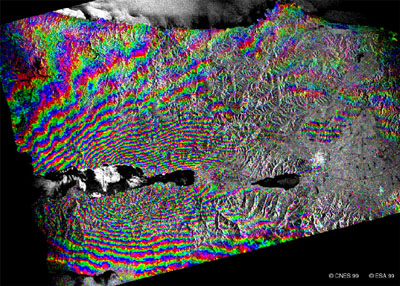 Satellite image of the 1999 earthquake in Turkey

Radar instruments on ESA’s ERS-2 and Envisat satellites make it possible to find out if the surface is moving. They can measure the movement to within a few millimetres.

Radar also can be used to map and assess the damage to buildings, day or night. This is of great help to rescue and recovery teams.

There is still no accurate way to forecast earthquakes. However, ESA’s satellites provide precise information that can help scientists in their task. Data collected over many years helps to predict future quakes and to unveil hidden faults.