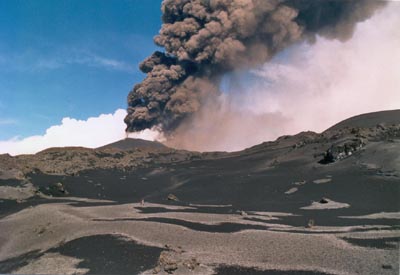 There are about 1,500 active volcanoes, with 50 or so erupting each year. Most of these volcanoes are found around the Pacific Ocean – a belt known as the Pacific “Ring of Fire”. Europe has its own volcanoes, such as Etna and Vesuvius, that have erupted many times in history.

At least 500 million people live close to an active volcano. When an eruption occurs, nearby areas may be covered with ash and red-hot lava.

Fields and buildings may be buried. Poisonous gases, clouds of glowing ash or mud flows may kill everyone in their path. Fortunately, satellites are now helping to identify the most dangerous volcanoes. 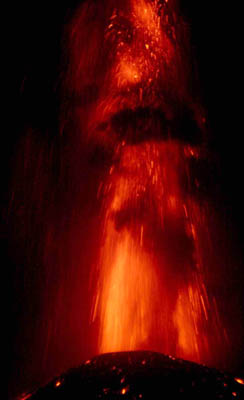 ESA’s Envisat and ERS-2 satellites study volcanoes in many different ways. Cameras show lava flows and clouds of ash. Infrared instruments detect hot lava that is rising to the surface.

Radar can view the “breathing” of a volcano as molten rock moves inside it. Surface swelling of only a few millimetres can reveal pressure building up before an eruption. Other sensors identify the gases and particles released into the air.

Such data saves lives and helps to predict when the next eruption will come. Satellite maps of the damaged areas also help rescue and recovery.