18 months ago, scientists were in despair when a satellite that would send back vital data about climate change was lost during a launch failure. However, ESA quickly decided to rebuild CryoSat and the mission is now well on the way to recovery. Indeed, when it lifts off in 2009, CryoSat-2 will be even more capable than its forerunner.

The great advantage of CryoSat-2 is its ability to measure changes in the thickness of ice cover, both on land and sea. Its primary radar instrument and an identical back-up will be able to study the Earth’s ice sheets and glaciers in all weathers, day or night. 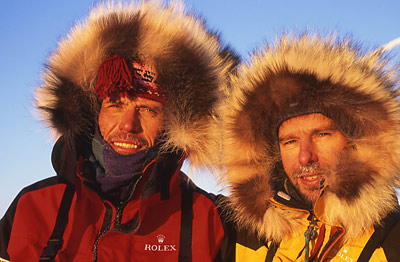 In order to prepare for the launch, a number of field experiments are getting under way in the Arctic. One is the Arctic Arc Expedition, part of the International Polar Year. The expedition’s two Belgian explorers, Alain Hubert and Dixie Dansercoer, have just left for a punishing 110-day trek across the frozen wilderness.

Each pulling a 130-kg sledge holding supplies and equipment, the two intrepid explorers will 'walk' over the top of the world, from an island in Siberia to southern Greenland. On the way, they will be keeping careful records of snow depth. Such measurements are extremely useful for checking out the method used to convert CryoSat’s radar measurements into accurate ice thickness data.

Scientists will also be heading out to the ice-covered islands of Svalbard in mid-April. Their snow and ice measurements will be compared with data sent back from an aircraft carrying a copy of CryoSat’s radar instrument.