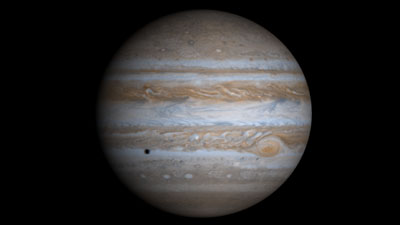 Beyond the asteroid belt is Jupiter, the fifth planet from the Sun. Everything about Jupiter is large. It is so big that it could easily swallow all of the other planets (or more than 1,300 Earths). It also weighs more than twice as much as all the other planets. Despite its huge size, Jupiter is the fastest-spinning planet, rotating once in less than 10 hours.

Jupiter is five times as far from the Sun as the Earth, so its surface temperature is low, around –145°C. Every 13 months or so it comes closer to us and becomes very bright in the night sky.

Jupiter is a giant ball of gas, with no solid surface. It is mainly made of the very light gases, hydrogen and helium. Telescopes show a cloudy atmosphere with colourful belts and spots. The largest feature – called the Great Red Spot – is a giant storm, several times the size of the Earth. It has been blowing non-stop for more than 300 years.

Jupiter has a faint ring of dust, over 100,000 km wide, that was discovered by the Voyager spacecraft. It is also orbited by the largest family of satellites (63 at the latest count).

Four of these, discovered by the Italian scientist Galileo in 1610, are very big. Io has hundreds of volcanoes that cover its surface with yellow-orange sulphur. Europa has a smooth, icy surface that looks like a cracked egg shell. Ganymede has light and dark patches with grooves and craters. Callisto has an ancient, cratered surface.