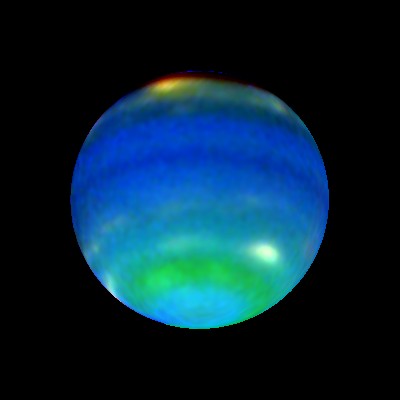 Neptune was discovered in 1846 by Johann Galle, an astronomer at the Berlin Observatory. Galle knew where to look because of calculations by French mathematician Urbain Le Verrier. Both Le Verrier and John Adams in England had realised that an unseen planet was pulling on Uranus, causing it to slow down or speed up.

Neptune turned out to be almost an identical twin of Uranus. It is 57 times bigger than the Earth, but spins quite rapidly – one day lasts only 16 hours 7 minutes. Its average distance from the Sun is about 4,500 million km, and one year on Neptune lasts for almost 165 Earth years.

Like Uranus, it has an atmosphere of hydrogen, helium and methane. Its interior is made of ices, with a possible rocky core. Although the atmosphere is very cold (-220 degrees C), the blue planet has some very strong winds and violent storms. Voyager 2 imaged a huge spot the size of the Earth.

Neptune has at least five dark, narrow rings (named after Galle, Le Verrier, Adams and others who worked to discover the planet).

It has 13 known moons. By far the largest is Triton, an icy world that is bigger than Pluto. Triton is very cold, so its thin atmosphere has frozen onto the surface. However, it does have many active ice volcanoes that spurt plumes of gas and dust. Triton is also unusual because it travels “the wrong way” (east to west) around Neptune. It seems to have been captured by Neptune’s gravity long ago.