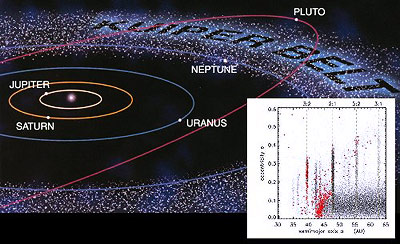 Modern telescopes have revealed hundreds of icy objects beyond the orbit of Neptune, in a region known as the Kuiper Belt. The Belt is named after Gerard Kuiper, a Dutch-born astronomer who suggested in 1951 that some comets may originate in this region.

The first Kuiper Belt Object was discovered in 1992, proving that Kuiper’s theory was correct. Detecting them is difficult because they are very faint and move so slowly. It takes hundreds of years for these objects to complete one orbit around the Sun.

The objects are probably left-overs from the birth of the planets. They were ejected to this remote outer region by interactions with the giant planets.

Most of the objects are small, typically 10-50 km across. Until recently, Pluto was the largest member, though a number of other objects were almost as large. 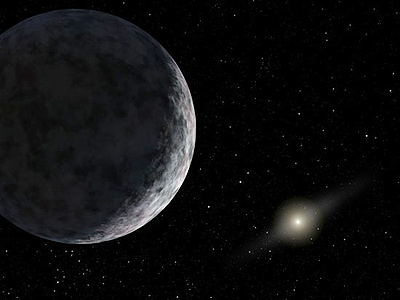 Then, in 2005, an even bigger object was found. Known as 2003 UB313, scientists nicknamed it “Xena” (after the warrior princess in the hit TV series) until they could give it a proper name, Eris.

When discovered, Eris was twice as far as Pluto (97 Sun-Earth distances) from the Sun. This made it the furthest object yet seen in the Solar System. Its orbit is also tilted by 44 degrees, so it travels well above and below the paths of the other planets. It has also been found to have a moon, named Dysnomia.

Not everyone agrees that Pluto and Eris should be regarded as the ninth and tenth planet in the Solar System. In 2006, the International Astronomical Union classed them as 'dwarf planets'.