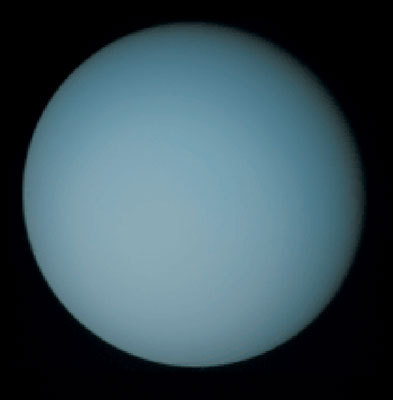 Uranus is the seventh planet from the Sun. It was discovered by William Herschel in 1781.

Uranus lies more than 2,800 million km from the Sun. At this distance, the temperature of its cloud tops is -214 degrees C. It moves quite slowly and has a long way to travel, so each orbit lasts 84 years.

Uranus is a giant world, the third largest planet in our Solar System. 64 Earths would fit inside it. Despite its size, it spins rapidly. A day on Uranus lasts only 17 hours 14 minutes.

Uranus spins like a top knocked over on its side. This means that the Sun is sometimes directly overhead at the poles. Each pole has a summer and a winter lasting 21 years, making them the hottest and coldest places on the planet!

When the Voyager 2 spacecraft visited Uranus in 1986, hardly any clouds were visible. However, recent images by the Hubble Space Telescope have shown some very large storms.

The main gases in its thick atmosphere are hydrogen and helium, with a small amount of methane. (The methane scatters blue light, which is why Uranus appears blue). However, it is very different from Jupiter and Saturn.

Uranus is mainly made of ‘ices’ – a mixture of water, methane and ammonia. At its centre there may be a small rocky core. This means that it is very lightweight for its size.

Uranus has 27 known moons. None of these are very big. The largest satellites are Oberon and Titania, both more than 1,500 km in diameter.

Uranus also has at least a dozen dark, dusty rings. Most of these are extremely thin. They are kept in shape by nearby “shepherd” moons. At least one ring is created by meteorites crashing into a small satellite.