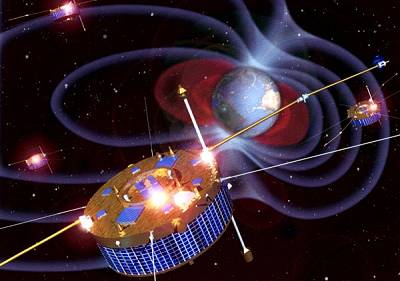 In the summer of 2000, four identical Cluster spacecraft were launched into highly elongated polar orbits which took them one third of the way to the Moon. Since then, the ESA quartet – known as Salsa, Samba, Rumba and Tango – has been flying in formation around the Earth. Sometimes they have been inside the planet’s magnetic field. Sometimes they have left the magnetosphere and flown through the electrically charged particles of the solar wind.

As their orbits and separation distances have changed, the spacecraft have provided the first 3-D observations of the invisible particles and magnetic fields that occupy near-Earth space. One area of special interest has been the aurora, a red and green curtain of light that is seen in the night sky above polar regions. Auroras occur when supersonic particles from the Sun collide with our planet’s magnetic field. Most are deflected by Earth’s magnetic shield, but some break through and are trapped.

These particles spiral down the magnetic field lines and collide with the upper atmosphere, creating the aurora. However, dark ‘holes’ – called black auroras – sometimes appear in the colourful curtain. Cluster found that these occur where particles escape upward into space instead of travelling down into the atmosphere.

Cluster has made many other discoveries, such as giant whirlpools that inject particles into Earth’s magnetic field. It also revealed how ‘killer’ electrons become so energetic that they can disable or destroy orbiting spacecraft.

The four satellites are all showing their age, but the Cluster team is confident that they can operate at least until 2016. Meanwhile, scientists from around the world are looking forward to continuing their exploration of the invisible space around our Earth.