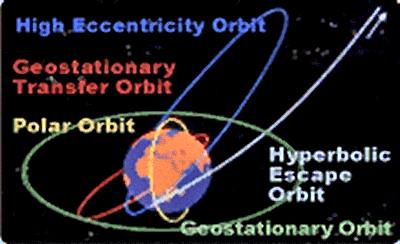 An orbit is the path of an object around a particular point in space, for example the path the Moon takes around the Earth. Orbits are determined by gravity, and are often 'elliptical', the shape of an oval.

Each satellite is placed in the best orbit to carry out its mission. For example, Earth observation satellites are usually placed in low (400 – 1,200 km) circular orbits. This allows them to travel around the Earth once every few hours, and to obtain detailed views of the planet’s surface.

The best path for these satellites is a "polar" orbit, which carries them over the north and south poles. As the Earth spins beneath them, the satellites can look directly down and study the entire planet – strip by strip - over a period of a few days.

Weather and communications satellites often “hover” above the same part of the Earth 24 hours a day. This is made possible by placing them in circular orbits about 36,000 km above the equator. At this altitude, they keep pace with the Earth’s spin, so they are always looking down on the same places. This is called a “geostationary orbit”. Some satellites – including the International Space Station – follow low orbits that are inclined (tilted) to the equator.

A number of scientific satellites, such as ESA’s Cluster and XMM-Newton, follow very elliptical (egg-shaped) orbits that bring them close to Earth and then carry them far away.