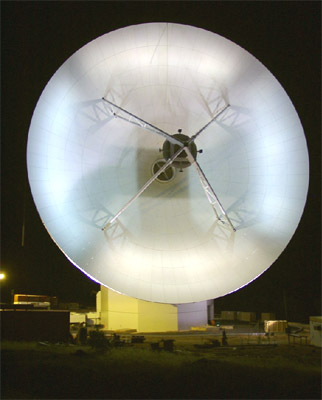 The European Space Operations Centre (ESOC) is linked to a worldwide network of ground stations.

After a launch, data from the satellite is sent to these ground stations and then to ESOC. This information is used to calculate the orbit and check on the satellite’s health 24 hours a day, seven days a week.

The network includes a number of large stations in Europe and Australia, including Kiruna in Sweden, Redu in Belgium and Villafranca and Cebreros in Spain.

Some smaller stations have been built in other parts of the world, including Kourou, Europe's Spaceport in South America, and at Santa Maria island in Portugal. These are mainly used during the launch and early phases of a mission.

In 2003, a new 35-metre antenna was built at New Norcia, near Perth, Australia. This giant dish, which weighs 120 tonnes, is designed to communicate with deep space missions such as Rosetta and Mars Express. Its surface is extremely smooth, with no bumps higher than 0.3 mm. In 2005, a similar antenna was built at Cebreros, Spain, and a new one will join the network in 2012 at Malargüe, Argentina.

The ground stations are designed to operate at various radio frequencies, similar to those used by mobile phones. They are so sensitive that they can pick up signals with the same power as an ordinary light bulb coming from a spacecraft millions of kilometres away.