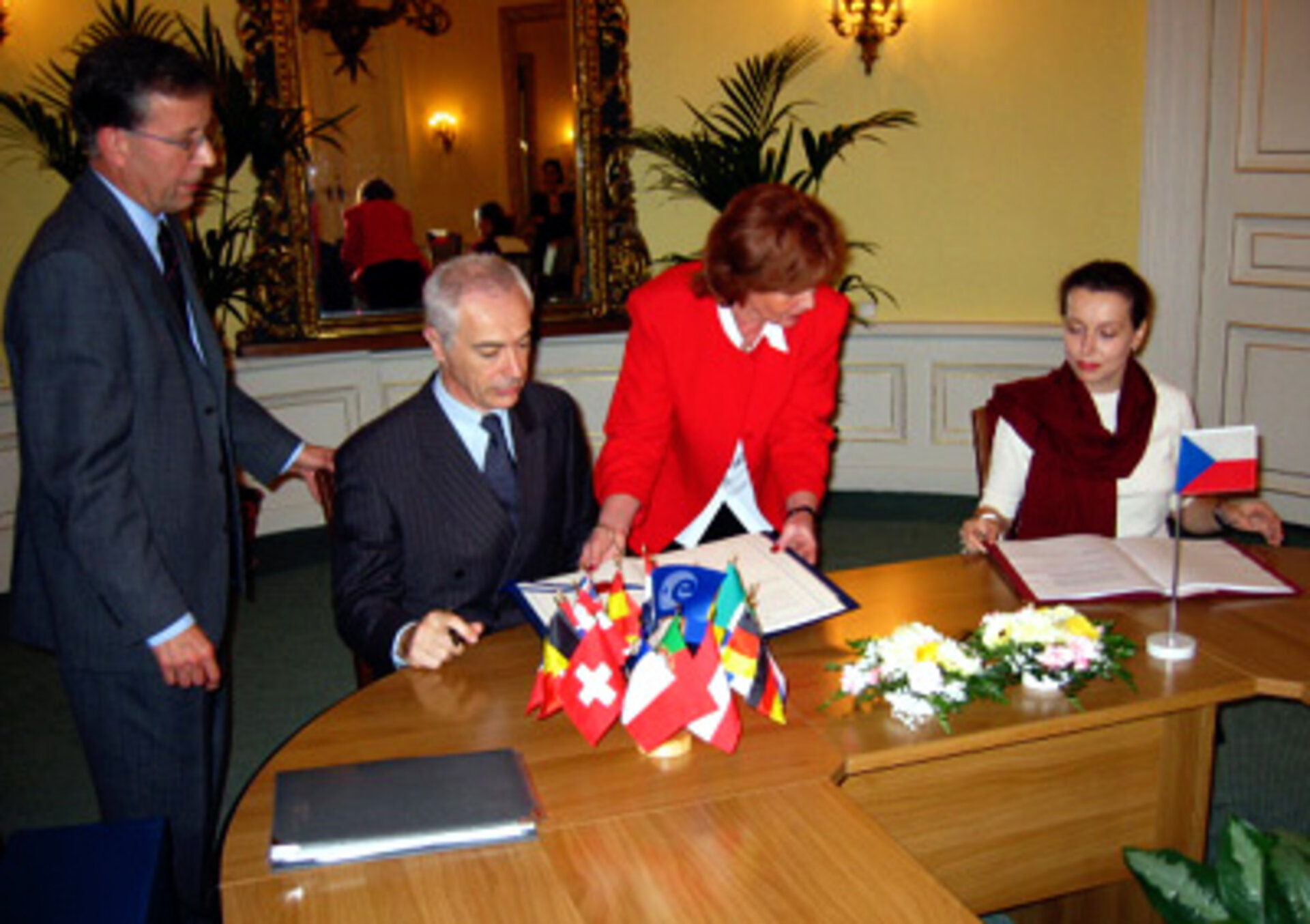 Hungary and the Czech Republic recently signed Cooperating State agreements with ESA. This means that both countries soon will be able to participate in nearly all ESA programmes.

On 5 November 2003 Hungary signed their PECS document (Plan of space collaboration activities for European Cooperating State) and became the first PECS country to join ESA. This was the result of seven months intensive work between ESA and Hungary to define the specific plan for space activity collaboration following the signature last April of the European Cooperating State (ECS) agreement between Hungary and ESA.

On 24 November the Czech Republic followed Hungary with their signature of the ECS agreement. The signed agreements define the legal basis for developing the specific plan (the PECS document) for the Czech Republic which must be in place and signed within the next 12 months.

For these two states, this concluded a process which started in 1999 to define how four European States: the Czech Republic, Hungary, Poland and Romania, could increase their participation in the European space programme. All four countries have experience in developing space technology from their previous participation in the Russian space programme.

Hungary and the Czech Republic have been cooperating with ESA since 1998 within the limited framework of the PRODEX programme. This will now be transformed into closer collaboration under the ECS agreements.

Under this new agreement the two states will make an annual payment to ESA. Initially they will each contribute with €5 million over a five-year period – 93% of which will return to each country in the form of contracts to industry and research institutes. The remaining 7% is an administration fee to ESA to cover the Agency's costs of integrating the participation of these two countries.

Dr Elõd Both, Director of the Hungarian Space Office, said at the signatory meeting in Paris on 5 November that this new agreement closes the successful participation of Hungary in ESA's PRODEX programme. This gave Hungary an opportunity to start business with ESA and to participate in state-of-the-art space projects with a good scientific output.

Through PRODEX, Hungary has participated in Rosetta, Mars Express and the International Space Station (ISS). Hungarian research institutes and companies provided a control and data management system for Rosetta and a power supply unit for the Rosetta lander. Several Hungarian projects have flown on the ISS to carry out research in material sciences, biology and space radiation. Hungary is also participating, together with the Swiss company Space-X, in developing optical miniature instrumentation for the PROBA-2 mission. Hungary will provide an innovative optical structure which will provide 360° vision.

For the new PECS agreement Hungary has proposed 47 projects. Of these, 19 projects have already been approved as these are primarily continuations of PRODEX activities and another 11 projects are in the pipeline for immediate evaluation. Hungary plans to participate primarily in space science (57%) and to life and material sciences (24%), but funds have also been earmarked for Earth observation and technology research.

"The function and importance of PECS is to pave the way forward for Hungary towards ESA," Dr Elõd Both says. "It will strengthen industrial expertise and capacity, including support for SMEs, and will further integrate Hungary into the European research area." He stressed that "the final goal of Hungary is to become a full member of ESA".

Czech Republic, 3rd country to have a citizen in space

"There is no doubt of the great potential for space research and industry in the Czech Republic," says Jan Kolar of the Czech Space Office (CSO).

Most recently the Czech satellite Mimosa was launched 30 June 2003 on a German-Russian launch vehicle. The 66-kilogramme Mimosa (acronym of MIcroMeasurements of Satellite Acceleration) satellite was designed by the Czech Astronomical Institute and will provide data on the density of the upper atmosphere from an elliptical orbit ranging from 820 km to 320 km in altitude.

"Since 2000 the Czech Republic has made funding available for space research projects. The PECS agreement will increase funding and also opportunities for applied research and private companies to develop space technologies," Kolar said.

Under the new agreement the Czech Republic and Hungary will be eligible to take part in both ESA research projects and ESA programmes with industrial projects.