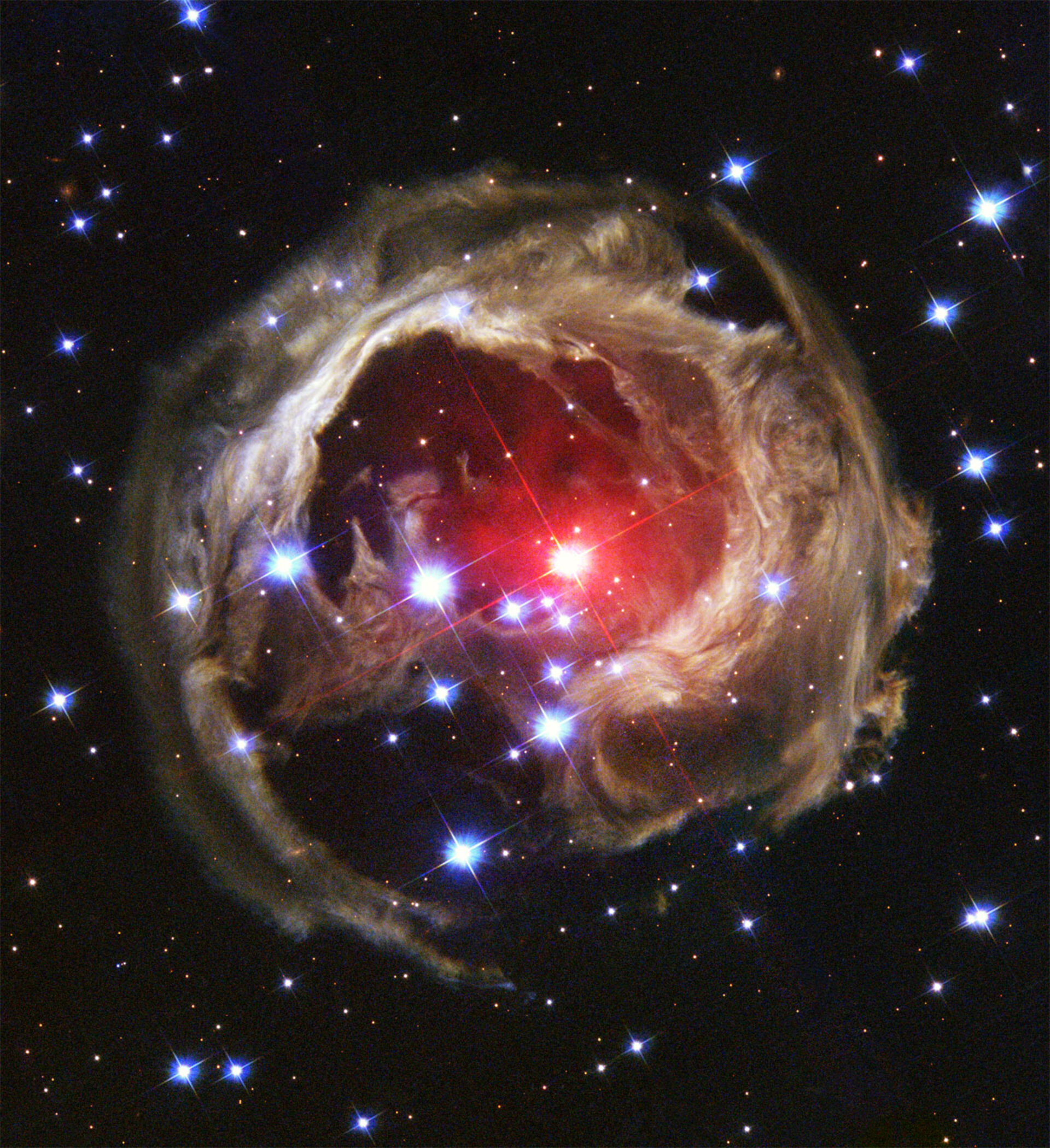 "Starry Night", Vincent van Gogh's famous painting, is renowned for its bold whorls of light sweeping across a raging night sky. Although this image of the heavens came only from the artist's restless imagination, a new picture from the NASA/ESA Hubble Space Telescope bears remarkable similarities to the Van Gogh work, complete with never-before-seen spirals of dust swirling across trillions of kilometres of interstellar space.

This image, obtained with the Advanced Camera for Surveys on 8 February 2004, is Hubble's latest view of an expanding halo of light around a distant star, named V838 Monocerotis (V838 Mon). The illumination of interstellar dust comes from the red supergiant star at the middle of the image, which gave off a flashbulb-like pulse of light two years ago. V838 Mon is located about 20 000 light-years away from Earth in the direction of the constellation Monoceros, placing the star at the outer edge of our Milky Way galaxy.

Called a 'light echo', the expanding illumination of a dusty cloud around the star has been revealing remarkable structures ever since the star suddenly brightened for several weeks in early 2002. Though Hubble has followed the light echo in several snapshots, this new image shows swirls or eddies in the dusty cloud for the first time. These eddies are probably caused by turbulence in the dust and gas around the star as they slowly expand away. The dust and gas were likely ejected from the star in a previous explosion, similar to the 2002 event, which occurred some tens of thousands of years ago. The surrounding dust remained invisible and unsuspected until suddenly illuminated by the brilliant explosion of the central star two years ago.

The Hubble Space Telescope has imaged V838 Mon and its light echo several times since the star's outburst in January 2002, in order to follow the constantly changing appearance of the dust as the pulse of illumination continues to expand away from the star at the speed of light. During the outburst event, the normally faint star suddenly brightened, becoming 600 000 times more luminous than our Sun. It was thus one of the most luminous stars in the entire Milky Way, until it faded away again in April 2002. The star has some similarities to a class of objects called 'novae', which suddenly increase in brightness due to thermonuclear explosions at their surfaces; however, the detailed behaviour of V838 Mon, in particular its extremely red colour, has been completely different from any previously known nova.

Nature's own piece of performance art, this structure will continue to change its appearance in coming years as the light from the stellar outburst continues to propagate outward and bounce off more distant black clouds of dust. Astronomers expect the echoes to remain visible for at least the rest of the current decade.

The colour image is composed of three different exposures through a blue filter (5250 seconds), a green filter (1050 seconds) and a near-infrared filter (300 seconds).

Animations of the discovery and general Hubble Space Telescope background footage are available from: http://www.spacetelescope.org/bin/videos.pl?&string=heic0405